If you are a true fan of Star Wars, the safest thing is that you have tried to play one of the many games that have been released on many platforms. If you didn’t know, you can play any of these games from your Mac, so in this post we leave you a list of some of them in case you want to try.

Is it possible to have Star Wars games without Apple Arcade 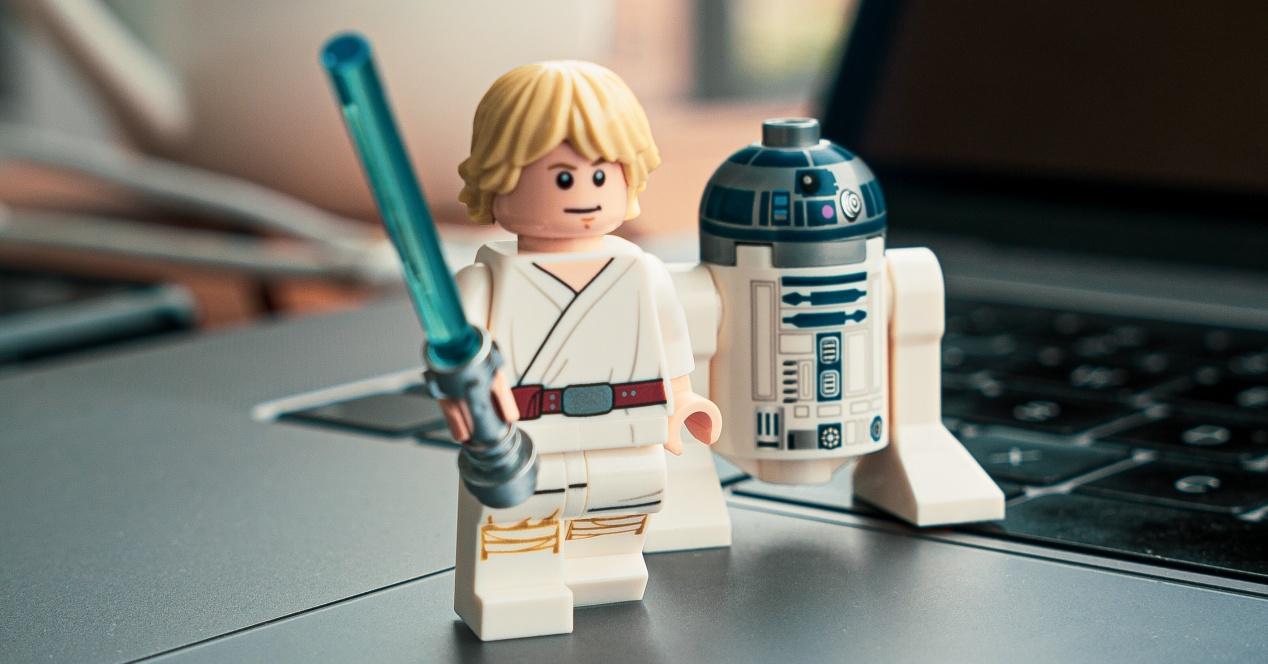 Star Wars is one of the most famous sagas with the most merchandising and audiovisual products on the scene. For this reason, there are a large number of video games for different platforms available to all fans, and there are many of them. Of course, there are also many for Apple devices, and after the launch of Apple Arcade it is possible to find games there. But it is not the only option to be able to enjoy these juices, you can also enjoy them through other websites and within the App Store itself.

It’s true that Apple Arcade has become very important in terms of games, but despite its appearance, there are those who prefer to play with apps downloaded from the App Store or directly from developers. For this reason, we wanted to highlight in this list games that you can find both in Apple Arcade and in the App Store or developer stores.

Being a saga that has been quite successful for several years, the first games were released several years ago. However, many of these games have been re-versioned to be able to adapt them to new platforms, as is the case with these games that we leave you here below, available to enjoy on your Mac. In this game follow the story of the ‘Delta Squadron’, an elite group of clone commandos, through three missions during the Clone Wars. Formed into squads of four by mercenaries, the commandos can fight anyone, having received live-fire training rather than computer simulations.

The game covers the activities of the Delta Squad in three locations and in each location, you will be able to lead your team through a series of objectives while fighting against enemy forces. Additionally, you will be assisted throughout the game by a clone advisor named CC-01/425, who periodically updates the mission objectives as they progress through each level. 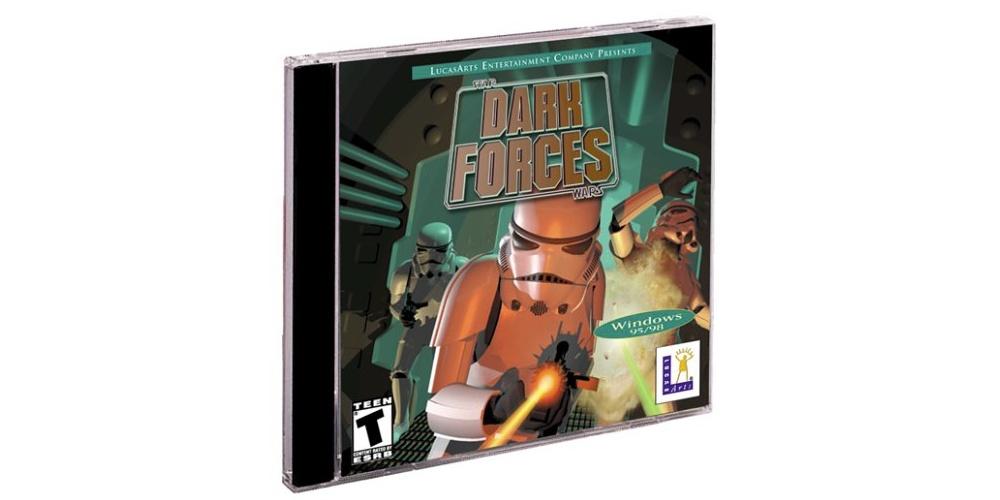 This was a very successful game that emerged in 1995 and has become successful again thanks to its version for computers. This series of Stories is centered on the character of Kyle Katarn, a mercenary from the Empire, and also on Jan Ors, his pilot and provider of information on missions. The evil Empire is creating a terrible army, one that once finished will become the latest cog in the Empire’s arsenal of terror and domination.

You will have to join the secret operations division of the Rebel Alliance, infiltrate the Empire and fight against all the men and machines that the Empire can muster. During your mission you will have to search for clues throughout a vast galaxy, attack enemy bases, and all in a desperate attempt to stop the activation of a fearsome new weapon. 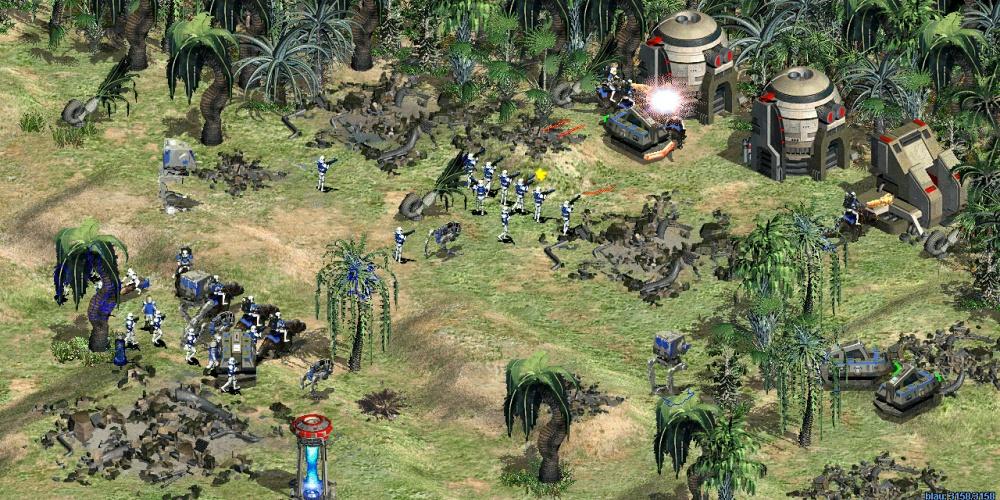 The player controls a race and leads it through four technological levels. The game starts at the first level, where a few buildings and units are available. Afterwards, the user gains the ability to advance to the second level, where they will have a greater number of upgrades, including buildings and weapons.

The original game comes with six campaigns, and the expansion has two more, reflecting some of the story’s events. There is also a standard game option where you will be alone competing against computer generated players. Your objective will be to defeat them in order to gain control of the map. However, in addition to this objective, there are more missions, such as protecting buildings that can be key to the story. In multiplayer mode, up to eight players, both online and offline, can compete for the map. 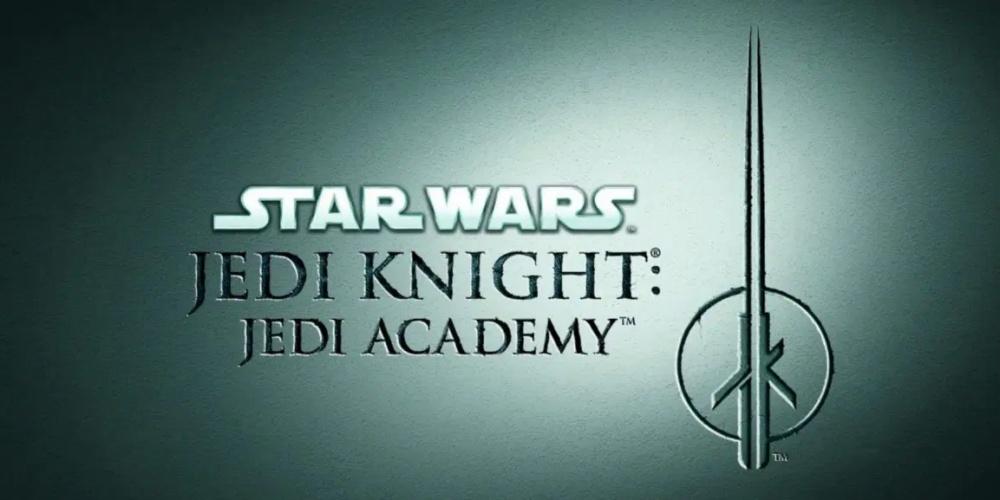 Experience the latest installment in the acclaimed Jedi Knight series with Jedi Knight: Jedi Academy. With this game, you will step into the shoes of a new student eager to learn the ways of the Force from Jedi Master Luke Skywalker. Interact with famous Star Wars characters in many classic Star Wars locations as you face the ultimate choice: fight for good and freedom on the light side, or follow the path of power and evil to the dark side.

You’ll be able to customize your character by defining appearance and gender before heading to the Academy to learn the power and dangers of the Force. You will also be able to build your own lightsaber from handle to blade. As the game progresses, you will discover the power of controlling two lightsabers. This game has several multiplayer modes, so you can enjoy the adventures in the Academy with your friends. 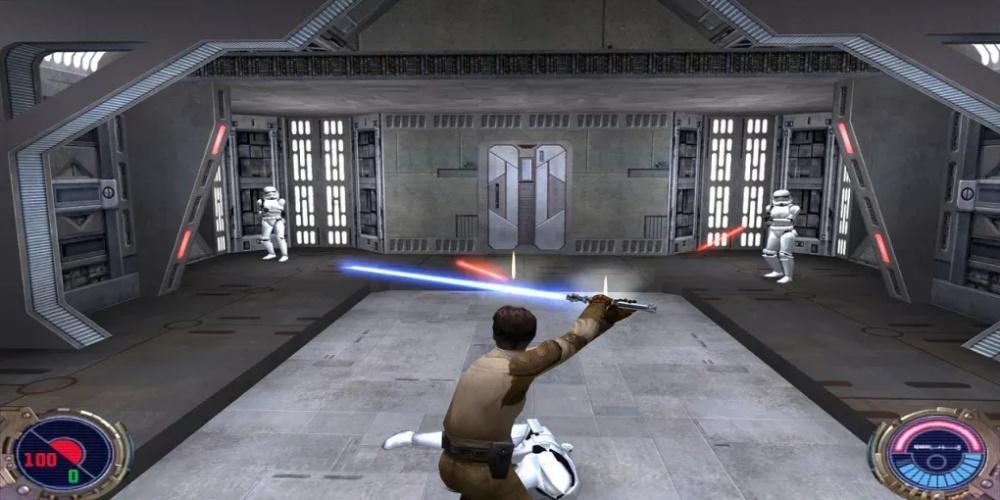 Jedi Knight is considered one of the best Star Wars stories ever seen in a video game. Now, with the passage of time, it may seem a bit hackneyed, but at the time the truth is that it was presented as a quite revolutionary argument, which collected ideas from multiple competing video games and merged them under the auspices of the Star Wars universe.

This game continues with the style of that groundbreaking Dark Forces that changed everything, but adds a fundamental feature that very few titles had taken advantage of in digital entertainment, Jedi powers and lightsaber combat, improving everything seen in Dark Forces II . It is undoubtedly an improved version of other games in many aspects, which makes it an ideal game if you are a fan of the saga.

Although before it was more common for there to be new Star Wars games every so often. Now that the fever of the saga has subsided, the games have decreased but nevertheless there are still new games, although less frequently. That is why we leave you a list with some of the best current juices. 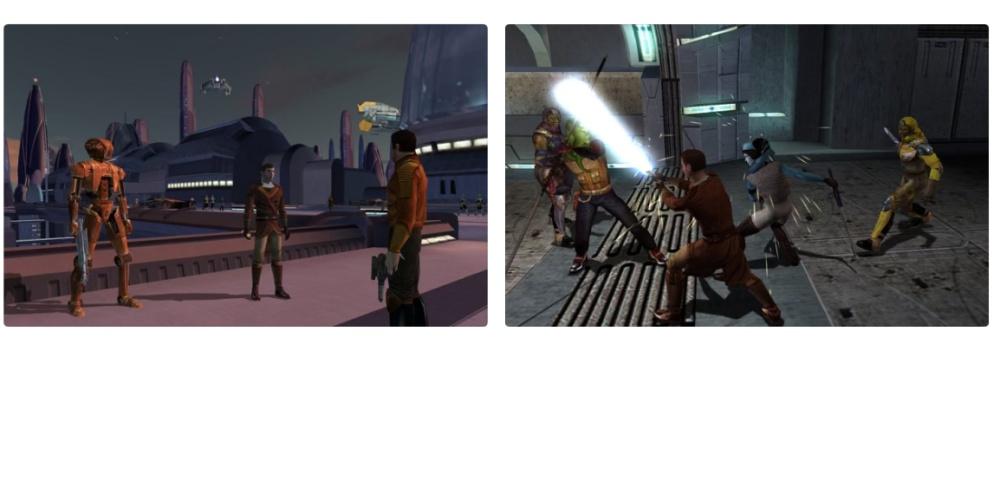 Will you be able to harness the saving power of the Force? Or will you fall to the temptations of the Dark Side? Every decision you make will affect your future and that of your party members. Design your character and play your way. Whether you prefer stealth and infiltration tactics, lightsaber combat, or using the powers of the Force, there is always more than one way to deal with any situation.

Your epic journey will take you to iconic locations such as the Dantooine Jedi Enclave, the Tatooine Cantina, the Sith Academy on Korriban, Kashyyk, the home planet of the Wookiees, and many other different planets from the Star Wars canon. Set 4,000 years before the Galactic Empire, you must lead a group of heroes and villains in an epic fight to save the galaxy. 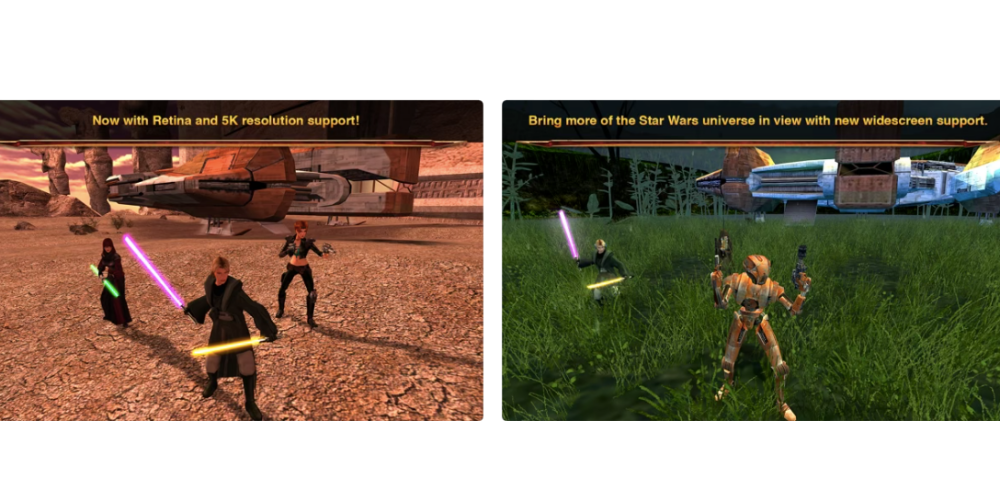 Five years after the events of the award-winning game Star Wars®: Knights of the Old Republic™, the Sith Lords have hunted the Jedi Knights to the brink of extinction and are about to destroy the Old Republic.

With the Jedi Order in ruins, the Republic’s only hope lies with a lone Jedi trying to reconnect with the Force. As this Jedi, you will face the most terrible decision in the universe: stay on the light side or succumb to the dark side. 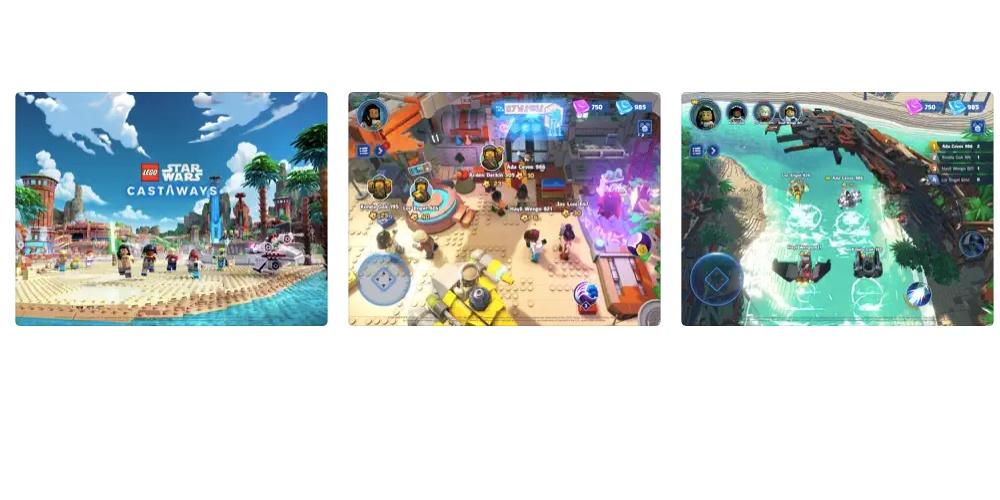 With this game you will be able to explore a mysterious planet and make new friends in this game. By customizing their characters, fans can experience their own Star Wars adventures in the first LEGO Star Wars social action/adventure game, available only on Apple Arcade.

Build your own in-game LEGO minifigure using LEGO bricks in a new Star Wars game. Discover a secret world, home to space castaways, and start a new life there. Explore a new island, meet its inhabitants, pilot Microfighters and even dance from party to party. Form a group or play solo and enter simulations, recorded with technology from an ancient civilization, that recreate memorable moments from the Star Wars universe. Take on enemies, solve puzzles, improve your skills in combat arenas, and prove your piloting skills in flight simulations. Unravel mysteries and discover a growing danger that threatens the entire planet. 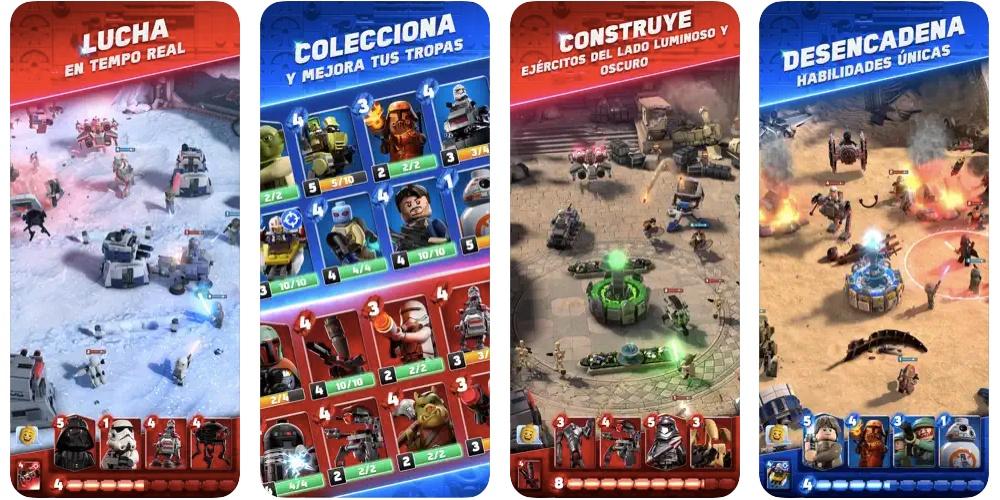 Command your favorite LEGO Star Wars characters in real-time multiplayer battles in arenas inspired by iconic locations from across the galaxy. Create light side and dark side armies and build LEGO towers on the battlefield and develop your strategy to attack, defend and capture different territories as you make your way to the enemy base to ensure victory.

Learn and master the battle tactics of both sides of the Force with unique new combinations of units and strategize with characters from the Star Wars™ universe. Build LEGO towers on the battlefield to defend your base or advance and take over your opponent’s territory. Discover the different types of towers and their advantages. Build a droid factory to instantly raise an army, shoot down enemies from the air, or turn up the heat with a fire tower. 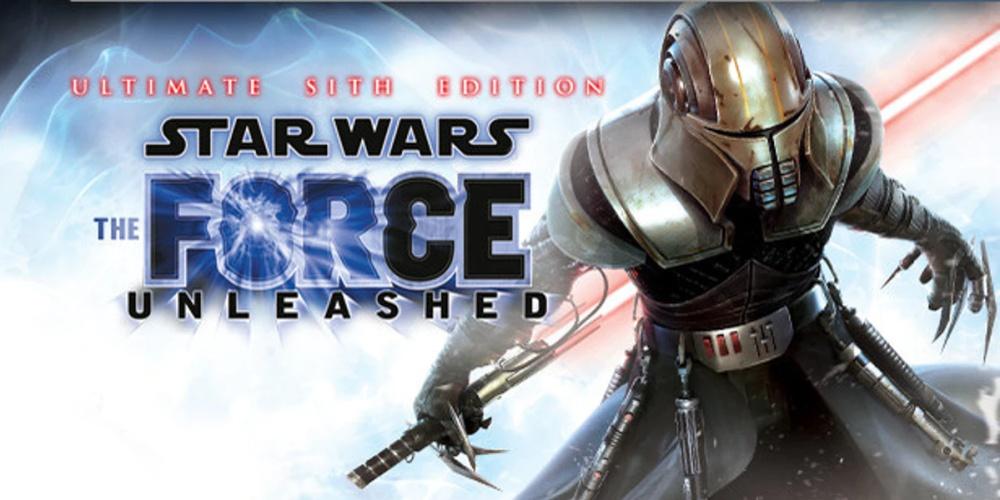 The story and action of Star Wars is expanded with this game, a special new version of the game that will show players the deepest and darkest side of the Force in one story. that puts them on a collision course with Luke Skywalker himself. The Ultima Sith Edition includes all of the original missions found in Star Wars: The Force Unleashed, as well as content previously only available via download and an all-new exclusive bonus level.

Star Wars: The Force Unleashed completely reimagines the scope and scale of the Force and casts players as Darth Vader’s “Secret Apprentice,” revealing new revelations about the Star Wars galaxy as seen through the eyes of a mysterious character. again armed with unprecedented powers.

Of the classic juices, we stay with Dark Force. It is a classic game, with graphics that will remind you of when you were a teenager and you started playing your first video games. It tells a story that will be familiar to you if you have seen the movies or are familiar with them.

Of the most modern games, LEGO Castaways stands out. It is available on Apple Arcade and it is the first collaboration between the two brands. You will be able to completely customize your avatar, which is a LEGO figure, so you will feel that you are playing with the famous figures as when you were little.