One of the most common functions we carry out on our computer is to install applications. One way to simplify the way we install programs in Windows is through the command line. For this we can use a tool like Scoop, capable of easily searching and installing different software packages, simply using the Windows PowerShell tool.

And is that one of the many differences that we can find between Windows and Linux operating systems is the way in which the programs are installed. In the Microsoft operating system, the usual thing is to download an .exe file, run it and follow the steps indicated by the wizard. In Linux, although it is also possible, the usual thing is to do it in text mode through a package manager, to always have the most up-to-date version from your servers to later install it on the computer. 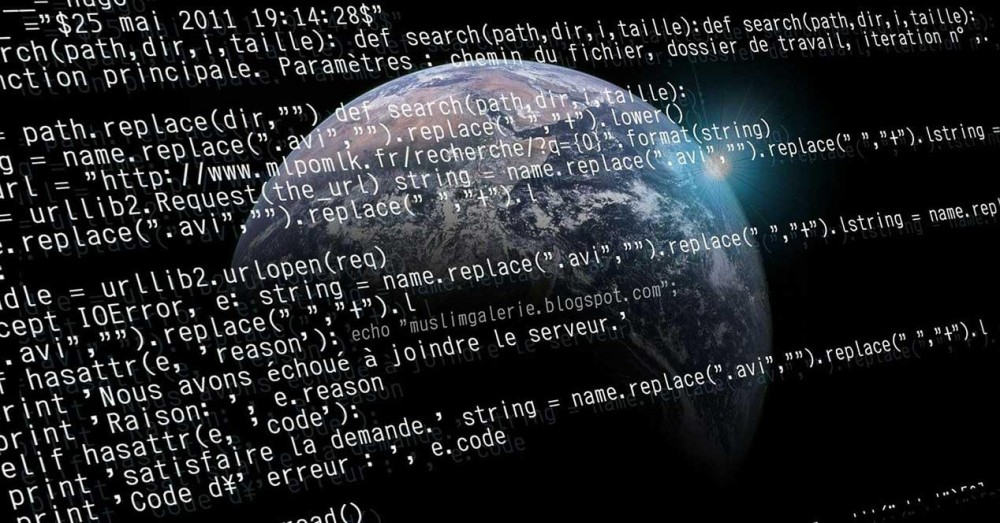 Scoop is nothing more than a handy command line package manager that makes it easy to install applications on any Windows computer. Its concept is very similar to Linux apt and yum, because through the PowerShell terminal we can download the most recent versions of the programs from the official servers themselves. With this, we avoid having to make different clicks during the configuration of the installation of a program and supporting the annoying pop-up windows requesting administrator permissions.

That is why by using Scoop, we can download and install compatible programs using a single command. It is easy to install, uninstall and find any software we need without having to continually visit web pages. This tool is very programmable, so it allows you to run repeated configurations to obtain a better work environment.

Using Scoop will allow us to eliminate such annoying things as:

Try Scoop on your Windows 10 computer

To be able to use Scoop on our computer, it will only be necessary to have the Windows 7 SP1 +, Windows 8 or Windows 10 operating system, as well as make sure that we have PowerShell 5 (or later, includes PowerShell Core) and .NET Framework 4.5 (or later) installed .

The programs that are best adapted to be installed with Scoop are those commonly known as portables. These compressed applications run independently when they are extracted and do not require installation on our hard drive, avoiding changing the registry by placing files outside the program directory. Likewise, since Scoop allows you to uninstall applications, it is also compatible with applications that require installation to function. We can see the list of programs in its GitHub repository, by clicking on this link .

The most recommended way to install Scoop is by downloading and running its automatic installer which is distributed as a PowerShell script. Therefore, the first thing we must do is write PowerShell in the Windows start menu and start it. Once the window appears, we must write the following command that will allow us to execute scripts that have originated from a remote source: 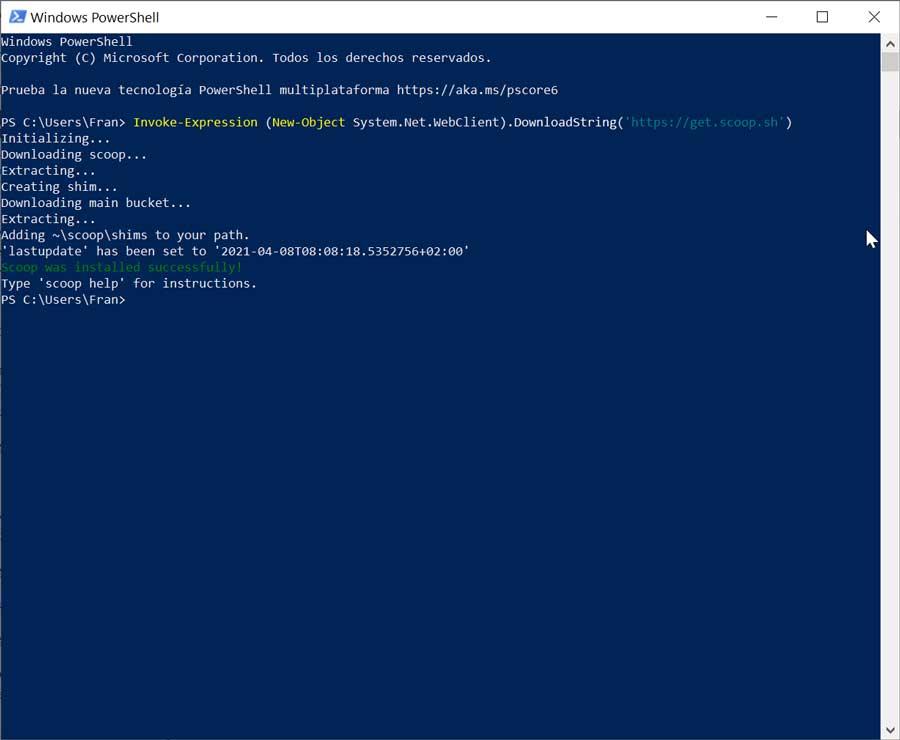 Once we have it installed, we can now use Scoop to install different software on our PC. To install programs we must write the command that appears below, replacing “program” with the name of the program that we are going to install.

In this way, in case we want to install the famous file compressor called 7Zip, we must write the following command:

The application will automatically download and install the latest available version of 7zip, including any dependencies it requires. 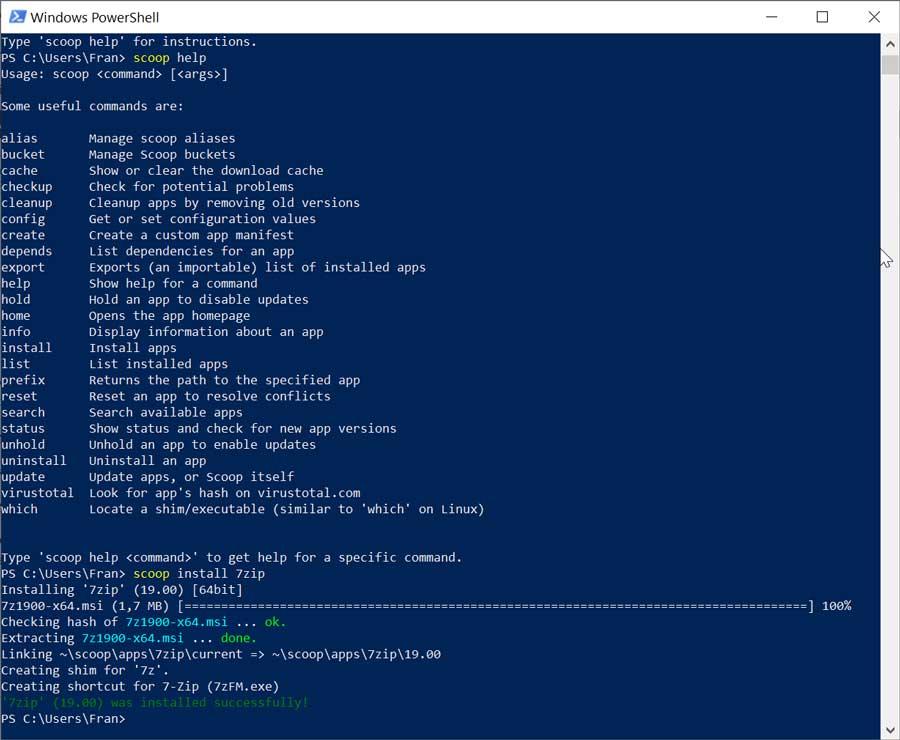 In addition to installing applications, like Scoop we have a wide list of commands available with which to interact, among which we can highlight: 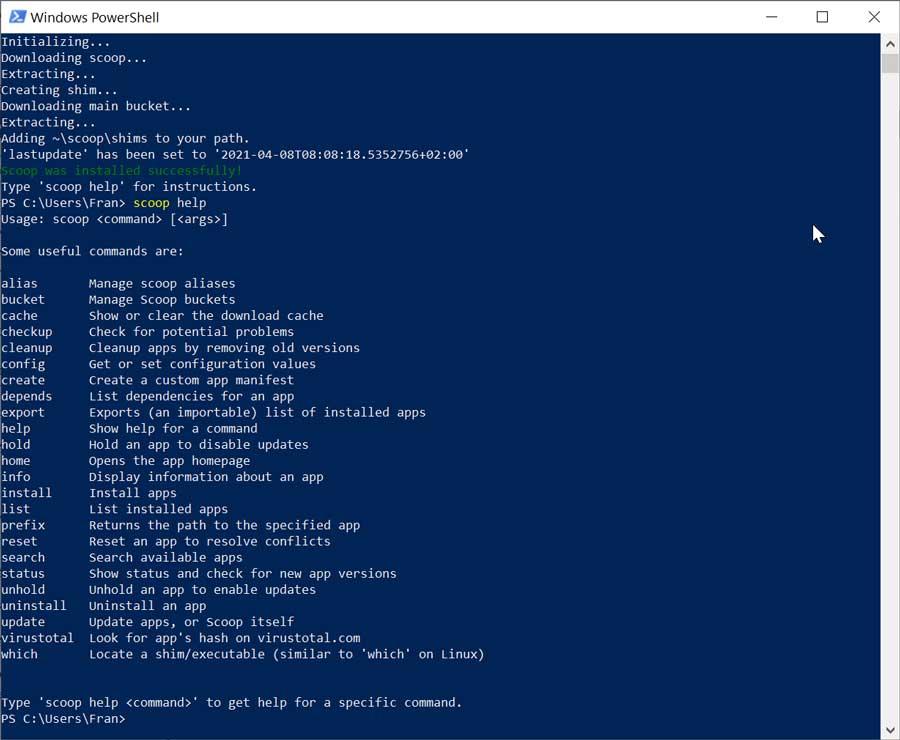 By way of conclusion we can point out that Scoop is a highly recommended tool for advanced users who know command line tools, as well as for beginners who want to simplify the installation procedure of different applications in Windows. For both one and others, Scoop can be considered an essential tool and one of the most useful that exists.

If we are looking for a tool with which to install applications from the command line, we suggest some alternatives to Scoop:

It is a tool that we can use as a great alternative to the traditional methods of installing applications in Windows, using the command line, Linux-style. It currently has more than 6700 different programs such as some as popular as Adobe Acrobat Reader, Skype, 7-Zip, Google Chrome, among others. You can find the list of packages available by clicking here.

It is possibly one of the most used tools to install programs from the command line. This service has more than 91,000 repositories for installation. This application will allow us to install applications from a PowerShell terminal by downloading the most recent versions directly from the official servers. We can consult a complete list with the modules already included in this package manager from the following link .

Also called Windows Package Maanger, it is a package manager for Windows, through which we can install software through a series of official repositories over the Internet. This allows us to install different types of software from these repositories without having to search for the programs manually. Both the tool and its repositories are open source. To do this, what we must do is download this version from its repository and install it on the computer.