Over the last few years, a large number of users have opted to use the PC platform to enjoy their favorite games. The developers of the different titles, as well as the digital stores that have made them available to us, have had a lot to do with all this.

All this has greatly facilitated that more and more users opt for all this and thus enjoy those moments of leisure on the computer. It is not difficult to imagine that the most used operating system in this type of desktop computer, and especially for gaming, is Microsoft‘s Windows. Therefore, millions of users access stores such as Steam or the Epic Store to download after their purchase, the games they want to enjoy immediately.

It is undeniable that the experience In this sense is much better than just a few years ago when we had to approach stores to buy the physical format of the software. And it is not only that, but in addition to games, these stores allow us to interact with users, exchange objects, and a multitude of additional functions. But in this case we want to focus on an element that, as time goes by in the world of PC games, we refer to mods. What are mods and what do they bring to games

It is possible that many of you have already heard about these elements or software that we have the possibility to add to these titles. However, it is also likely that for many this is something totally unknown, so we are going to help you to know what you are missing. At first we all know that when a certain more or less important developer launches his project, he makes it available to everyone with a certain theme, graphics, etc.

But that’s what those mods are for , precisely to modify all this that we are commenting on, hence its name. To give you an idea of what we are talking about, when we refer to the aforementioned mods, they are software elements that have the ability to alter the contents of a game. And not only that, but they can also ostensibly modify and alter the original experience with a certain title . Something that we must be clear about is that not everyone is qualified to develop these types of additives. What users can do is download and implement them in the original.

In short, when talking about a Mod we find ourselves with the modification of a video game already developed and for sale to the public. This comes to us in the form of additional software or extension that allows us to greatly modify the original experience of the software that we enjoyed until that moment.

beyond the vision of its original creators , adding content, transforming its appearance, altering the playable base and even turning a work into a completely different one.

Different types that we can meet

At this point, it is not difficult to imagine that not all elements of this type are the same. Depending on the complexity, plot, characters or graphics of a certain game, developing a Mod for it can be more or less complex. Something that we must bear in mind is that these software objects have been with us for a good number of years, so they can not be considered as something new. What has been advancing is its complexity, the level of alternative experience .

We can find some mods that add content to the game, others that modify the settings, characters, sounds, etc. There are even those that offer us a totally different experience than the original title . At the same time there are some of these elements that we speak of that offer us additional help to that of the original. In this way, the addition provides us with information to be able to advance in the game, for example, in a much easier way.

But that’s not all, but there are also those that, instead of trying to modify the existing components, are used as alternative patches. This means that developers outside the original project release these pieces of software to patch known game bugs that have not yet been corrected by their creators. And that’s not all, but we can also find some mods that are responsible for continuing to support some titles abandoned by their original creators but still have a great community behind them.

Where to get them for your favorite games

First of all, we will tell you that these additions are often welcomed by the content creators themselves. In fact, there are many cases in which these facilitate the arrival of these elements to their own titles over time. Of course, not all game developers are 100% in agreement with the use of these plugins in their projects, although that does not mean that they do not exist. The difference in this second case is that the companies that launched the game leave the use of these additional elements under the responsibility of the users.

From the outset, the studios that allow the use and integration of these elements in their games, on many occasions offer access to download mods from the menus of their projects. This greatly facilitates downloading and installing all of it in the original. However, these can sometimes affect certain sections of the original game experience. Therefore, the companies that allow the use of these elements also limit the earnings of trophies by monetary when they are being used.

On the other hand, we can also find, instead of in the game itself, mods in the stores where these are sold. A clear example of this is the permissiveness of the largest, Steam , to get these additions through the Steam Workshop . 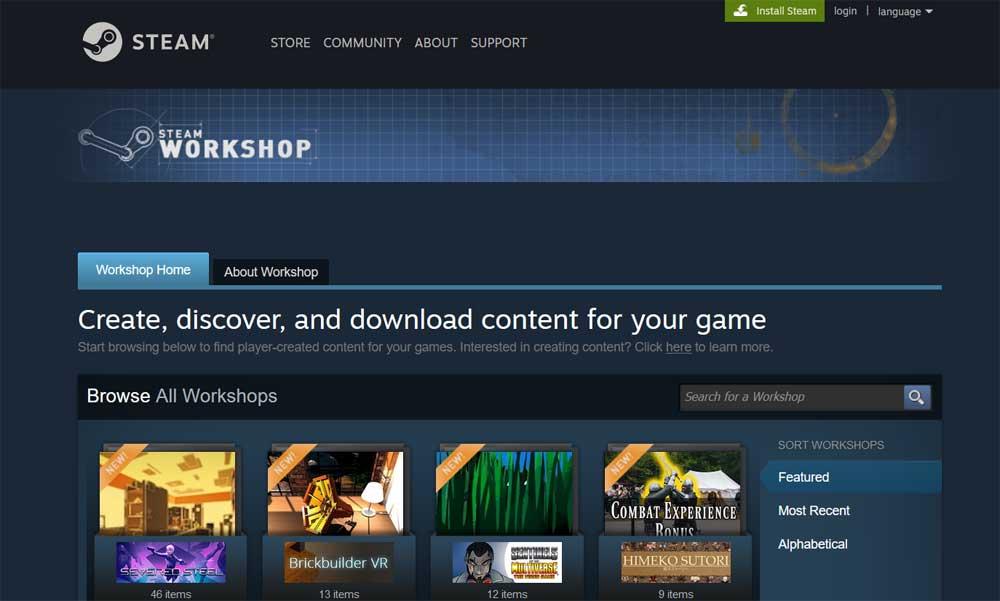 And how could it be otherwise on the internet we can find a good amount of these accessories for games. In fact, there are specialized websites that offer us all kinds of content in this regard to download.

How to install the mods

As a general rule, the implementation of these add-ons to games is usually not complicated at all. Keep in mind that these titles are enjoyed by all types of users, novice, experienced, older, or children. It is for all this reason that its creators try to facilitate its implementation in the corresponding games to a great extent. In this way, those that are offered directly in game stores have their own automatic installation system.

On the other hand, we can find some that we download from the internet in the form of executables. In this way we will only have to start them up so that they add themselves to the corresponding title that we already have installed. Another modality that we can find here are files that we only have to copy into the original game folder. Anyway, it is much appreciated that most of these elements come with a help file to make their implementation as simple as possible.