The software sector directly related to multimedia playback is very extensive. The main reason for all this is the countless players that we can find to listen to music or watch all kinds of videos. Among these there are solutions that have been with us for many years, such as MPC-HC.

Many of you, if you are asked what software you have installed for this type of task, you answer that VLC. But at the same time there are many other very interesting proposals that have been with us for a long time. Another such solution that over the years gained the respect of many was Media Player Classic Home Cinema also known as MPC-HC. However, it has been a long time since the top managers of this project decided to abandon it for various reasons. This was announced with its latest version, so its many customers and users were a bit hung up. But due to the success of this multimedia player, many other forks derived from this program appeared in parallel. One of them is precisely the one that we want to talk about in these same lines and that has become one of the most popular and used. Specifically, we refer to the one called MPC-BE .

It is possible that some of you do not know this fork that we are talking about. Therefore, we are going to talk about the differences that make it stand out from the original version of the player. To begin with, we will tell you that this new legacy version has all the functions of the original, and some more very interesting.

A very similar interface, but with some differences

As soon as we put MPC-BE into operation , we quickly realize that it has a user interface very similar to MPC-HC. Here we refer to items such as menus, shortcut keys, setup system, etc. The only difference that we can find in this sense is that some elements have changed their position a little, but it will not cost us anything to get used to it.

In addition, although it is not in sight, the first thing the developers of this fork did, was to correct the errors of its predecessor and polish some of its characteristics. At the same time they changed some of the most common keyboard shortcuts in the original program . It is also worth knowing that a thumbnail is added to the playback bar to locate us at exact points of the content being played.

However, if we refer to the inner workings of the new fork, here the changes are more important. It is worth mentioning that the player itself is prepared to mount ISO images directly, in addition to having new and more renewed algorithms for playing videos. This is what we find in the menu option View / Options / Video. 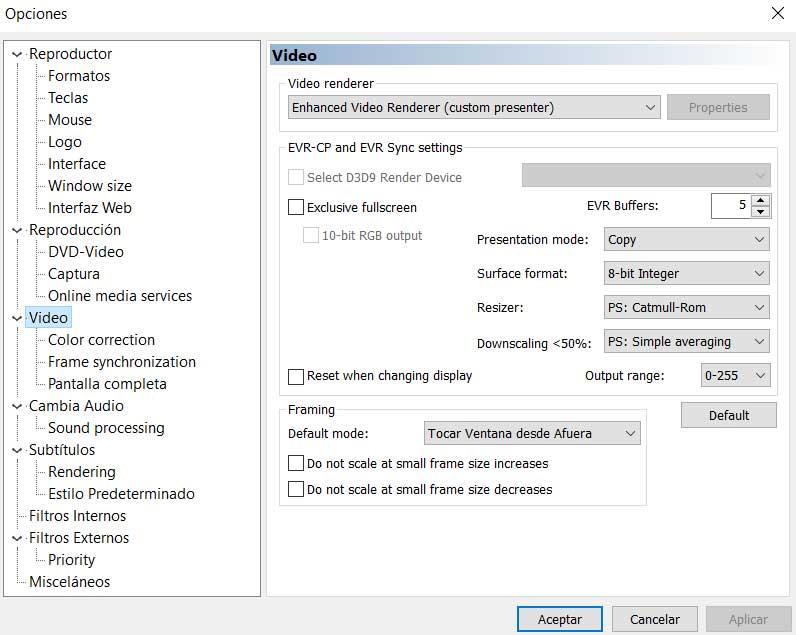 As it could not be otherwise, the audio and video codecs were also updated to the latest versions available at this time. This provides MPC-BE with support for practically any format we come across. We also find here support for use of the GPU when decoding videos . We can make use of this element to obtain different improvements in the image and do various types of sharpening.

On the other hand, its developers have also added support for the latest multimedia formats. Among these we can mention some of the importance of AV1 , Apple ProRes, MPNG or SpeedHQ.