Since the different cryptocurrencies began to spread throughout the internet, there are many who have tried to benefit from all these digital currencies. Some get it, and others do nothing but get upset. The same happens with the NFTs that are being talked about so much at the moment, as we are going to tell you below.

At the moment we can find a wide variety of business models through the internet with which to earn money, or at least try. In recent times, there has been a lot of talk about digital goods or Non-Fungible Tokens known as NFTs. There are many well-known companies that are entering this market, since they see it as an opportunity for the future. Similarly, many end users see here an opportunity to earn extra money or simply collect unique digital goods. Everything will depend on the needs and tastes of each one, but the truth is that these plans do not always go as well as we would like. We tell you all this because precisely now there has been a curious case that proves it. Specifically, we are referring to a digital good with these characteristics in the form of a tweet . And it is that an entry in the well-known social network of Jack Dorsey was sold as NFT for the not insignificant figure of 2.9 million dollars . Well, right now this content is up for auction and has a higher purchase offer of just $29 .

To give you an idea, a few weeks ago it became known that an Iranian-born businessman specializing in cryptocurrencies, Sina Estavi , wanted to sell this content. We’re talking about the NFT from former Twitter CEO Jack Dorsey’s first tweet asking for $50 million.

Estavi said that half of that amount would be donated to charity, and the other half would be used to grow his Blockchain companies. It is worth mentioning that he originally bought this NFT for $2.9 million in 2021. In that attempted sale, the NFT fetched some paltry bids of around $7,000 . A little later this value rose to 30,000 dollars, something scarce for the demand of 50 million dollars estimated at the beginning . 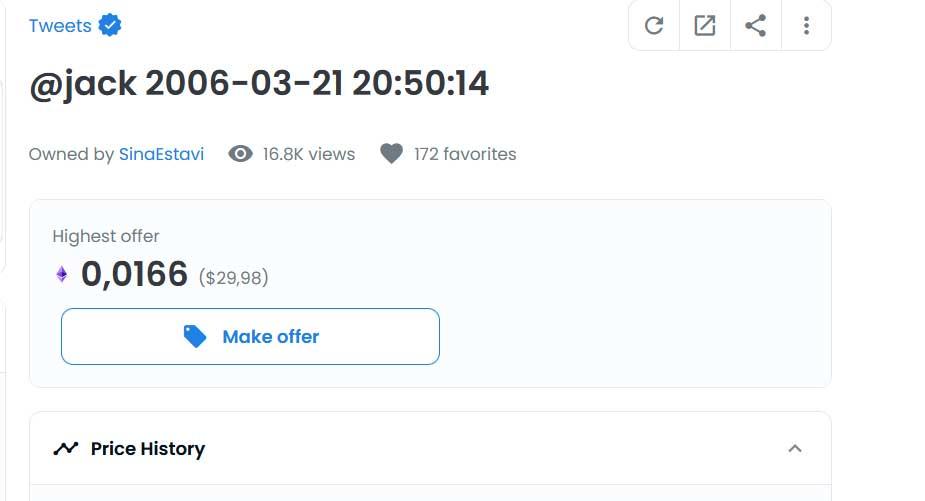 However, this decline in the value of the NFT does not seem to be over. We tell you because right now we can confirm that the value has plummeted even more. Specifically, if a few weeks ago the digital good still reached $30,000 on OpenSea , now there is a maximum purchase offer of $29. For all these reasons, it is not difficult to imagine that the businessman specialized in cryptocurrencies has not reached the objectives initially established with this element. However, it seems that, after what happened in this case, Estavi has not learned his lesson.

And it is that after this unsuccessful digital business, the businessman also made another offer to buy Elon Musk ‘s first tweet after buying Twitter for 44 million dollars. However, perhaps luck has smiled on him this time, and it appears that Musk will not go through with the deal.