Playing has become one of the great muses of today’s phones. If you want to always have the best possible experience when doing this, one of the mobiles that you should always keep in mind is the Lenovo Legion Phone Duel . This is a model designed by and for the most gaming market.

This is a terminal that has options that are as striking as they are surprising. An example is in the design, where on the back there are elements that light up when the device is poked (for example, the letters Legion) and that make it look very gaming. In addition, this terminal has a fast charge of 90 W , something that is impressive since it charges 50% of the battery in just ten minutes. To achieve this, you need to use a pair of USB Type-C cables. The truth is that the hardware inside this smartphone is powerful … very powerful. An example of what we say is that your processor is a Qualcomm Snapdragon 865+ (eight-core and seven-nanometer manufacturing technology). Inside this component there is an Adreno 650 GPU, which when combined with no less than 16 GB of RAM , an excellent user experience is achieved with all games, even the most demanding ones like PUBG.

Another thing that makes this Lenovo Legion Phone Duel is that it has no less than 512 GB of remoteness. Being type UFS 3.1, the information transfer is excellent, which has a very positive impact when it comes to playing and using all kinds of applications on this mobile that has the Android 10 operating system (with a customization called Legion OS ). By the way, its WiFi Dual Band ensures that online games go like a shot, so you will not find problems of “lag”; and it does not lack Bluetooth to use controls.

A battery that fits the bill

The amperage that this component has is 5,000 mAh , which combined with the aforementioned fast charge ensures a really good user experience because you will not get hung up on games when you least expect them.

Where the Lenovo Legion Phone Duel also stands out is on its screen. The 6.65-inch panel is AMOLED type and has a resolution of 2,340 x 1,080, allowing a pixel density of 388 dpi. In other words, the image quality is assured. But if there is something that stands out about this device, it is that it has a refresh rate of no less than 144 Hz , so everything that has to do with multimedia looks perfectly. One more detail: this item is HDR10 + compatible.

Final details of this gaming phone

This terminal does not lack a rear camera with two sensors (64 + 16 Mpx), which has a striking detail that is almost in the central area of the device to avoid getting a lot of dirt when holding the phone in horizontal format. The front, 20 megapixel, is Pop-Up type and is on the side of the Lenovo Legion Phone Duel so that it does not bother and can be used when playing. 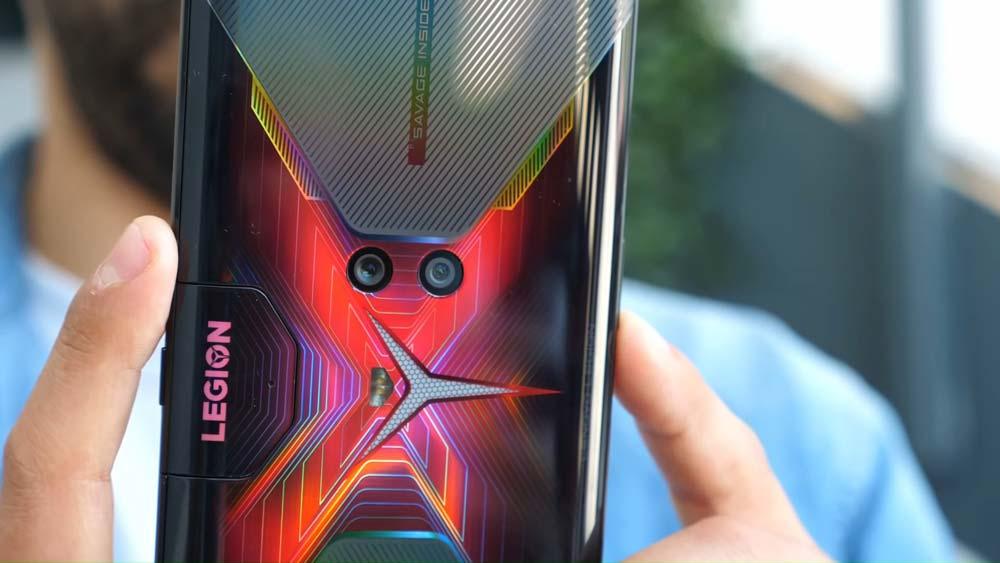 The truth is that this is a most striking device for its design and, especially, for the hardware it integrates. It can handle absolutely everything and has details that are completely differential. And, all this, with a price that stands at 999 euros. Without being especially short, he is not crazy these days.