Just three years ago Hyundai began to outline the first sketches of the Ioniq 6, the second battery-powered model that implemented the Ioniq seal, which offers a futuristic and groundbreaking look . An avant-garde, technological car with a clear objective: to unseat Tesla and be the number 1 car in all the rankings. And he is on his way to achieving it.

Hyundai Ioniq 6, the most anticipated launch A little over two weeks ago, the first official data of the new Ioniq 6 was revealed, Hyundai’s new electric saloon and the second model of the Ioniq sub-brand, along with the Ioniq 5 that was presented at the beginning of last year. Now, the new model has revealed all its details and specifications, such as autonomy, recharging times or consumption.

This is the production version of the Hyundai Prophecy Concept, and who makes it part as the second member of the Ioniq electric family , and for which the Ioniq 7, the most performance SUV of the South Korean house, will debut later.

We are talking about a long-awaited model by all and one that the industry had been following for a long time. A design that is accompanied by a spacious, cozy and modern interior space and advanced technology and 100% electric mechanics with two battery options and rear and all-wheel drive. In any case, what attracts attention is its important autonomy, which exceeds 602 km of the Tesla Model 3 or in the WLTP cycle together with a power of 239 kW (324 CV) in its most performance version.

Rivaling the Mercedes EQE, the BMW i4, or the Porsche Taycan for their similar powers, the clear objective of the Hyundai brand with this Ioniq 6 is none other than to put Tesla on the ropes , specifically against models like the Model 3 or the Model S, which are presented as the main protagonists of the purely electrified variant.

This car has different details that make it really special, such as its rear area. Announced as an electrified ‘streamliner’, this rear is the most characteristic part of this electric sedan, the same one that resembles the ever-present and legendary Porsche 911. 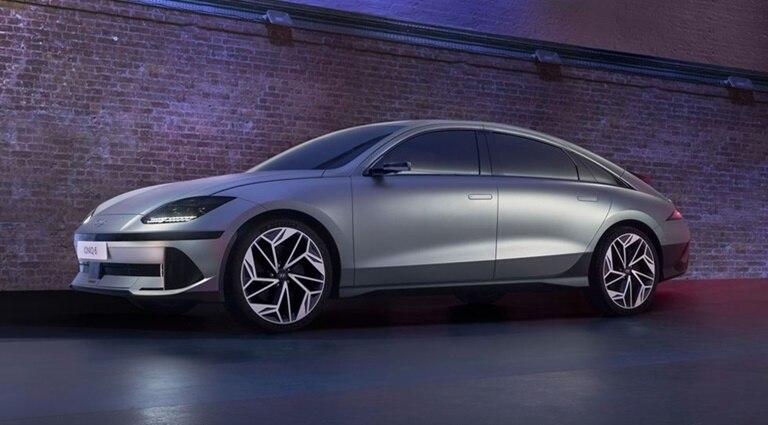 But it is not the only aspect similar to that of the German brand; We also see it with a front featuring a very aerodynamic bumper, peculiar flush-mounted headlights with Matrix LED technology, a hood with a descending line towards the front and a rounded roof that gives it its own personality.

On the other hand, and following the line of other electrified concepts, its interior is really modern and is designed more like a living room than like a traditional car.

As for its mechanics, the star model is presented with several options, such as rear or all -wheel drive, starting with a 53 kWh battery accompanied by rear-wheel drive and 18-inch tires. This results in a consumption that is estimated at less than 14 kWh/100 km according to the WLTP cycle, which makes it, the brand assures, one of the most efficient electric vehicles on the market (for example, compared to 16 kWh for the Model 3).

Above this version, a larger 77.4 kWh battery will also be offered, which will allow it to offer a range of 610 kilometers . The latter, with a total power of 239kW, will allow it to do 0-100 km/h in just 5.1 seconds, making it quite fast from the start.

In addition to this, it is to be hoped that the batteries of the Ioniq 6 can be combined with the brand ‘s 800V technology , which should clearly facilitate the charging process. With this, the manufacturer ensures that you can go from 10% to 80% capacity in just under 20 minutes , although we can use different types of recharge depending on the situation.