One of the biggest advantages of AMD‘s auto super resolution algorithm is that by its nature it is compatible with all GPUs. Not only with the ones that are included in your graphics cards, but also with those of the competition. How does Intel integrated graphics benefit from AMD’s FSR 2.0 ? Well, in a way that has surprised us very pleasantly.

NVIDIA‘s DLSS and AMD’s FSR serve the same purpose, but they are based on two different philosophies. While the GeForce algorithm is designed to take advantage of the Tensor units of NVIDIA graphics processors. AMD’s solution instead uses computer shader programs that can be run on any graphics card. If we add to this that it is not necessary to train the algorithm, then we have that FidelityFX Super Resolution has an advantage: it is compatible with all games with very few changes. So little by little it is becoming a standard that many games take advantage of. Since by its nature it works on a graphics card of any brand and, therefore, any user can take advantage of it. Of course, no one so far had dared to try the algorithm with the lowest power GPU on the market. We are talking about the iGPU inside the Intel Core.

This is AMD FSR 2.0 performance on Intel integrated graphics

At the moment only the Arkane classic, Deathloop, is the only game that uses FidelityFX Super Resolution in its second version. Although it requires more power to run than the first version of the algorithm, the improvement is noticeable. And it is that it is close to and in many cases equals the quality obtained by DLSS 2.0. Of course, AMD recommends a minimum power level. But what happens if the algorithm is tested on a very modest graph?

Today we know that the lower power graphics cards are the ones that the blue mark has integrated into its processors. How does FSR 2.0 work on Intel integrated graphics? To that end, the folks at Tom’s Hardware have run Deathloop with FSR 2.0 on several laptops. The first with a 96 EU Intel Core i7-1165G7 with integrated Iris Xe graphics , the second much more modest and with a Core i7-1065G7 with a Gen 11 graphics architecture . 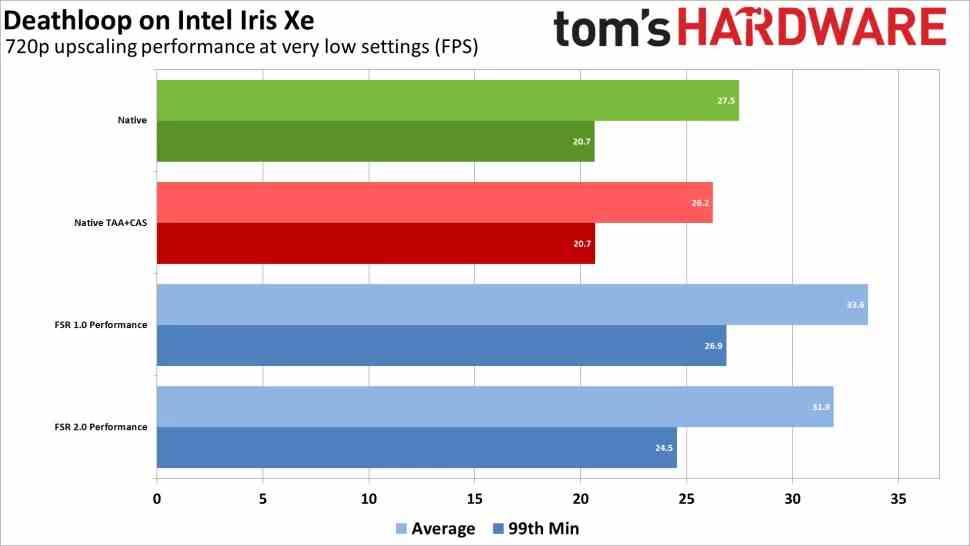 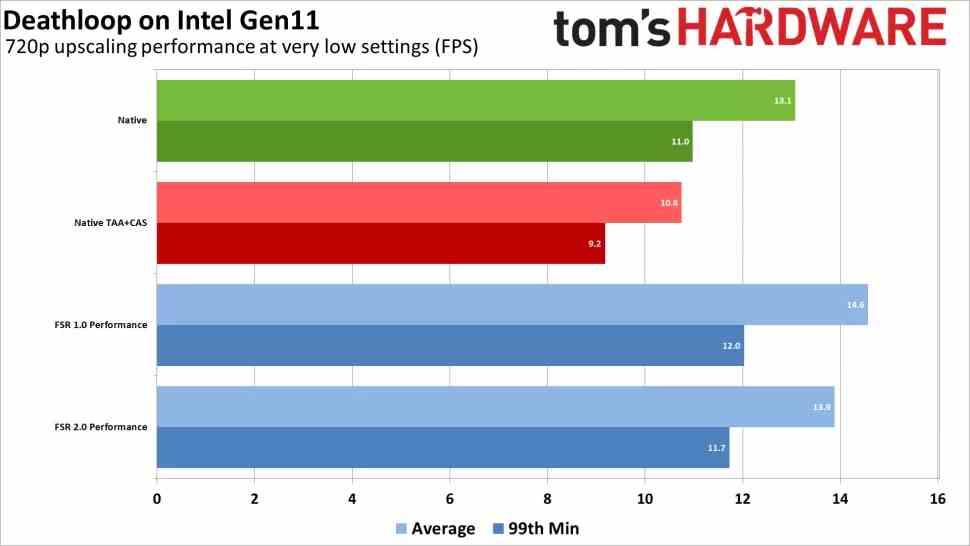 As you can see, there is an improvement of a few more frames per second. Of course we are talking about running the game at 720P output resolution and with very low graphics options. We wonder if the image quality will not be greatly affected in the process. Well, as you can see in the graphs above these lines. In both cases, one more frame is achieved. But not much, let’s not forget that this type of algorithms have the paradox that although they save power, they become more efficient at the same time the more calculation capacity the graphics card has.