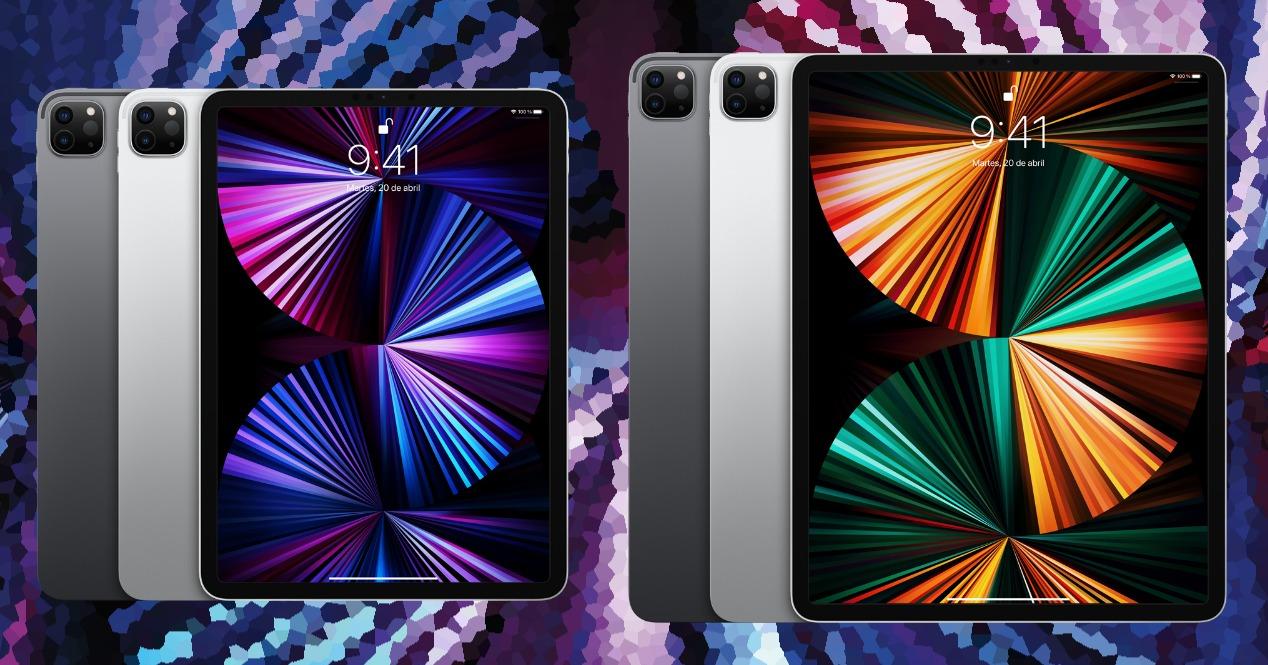 As usual in this range of tablets, Apple launches two versions of iPad Pro in 2021 with different sizes: 11 inches and 12.9. Although in previous generations both were identical in specifications, in this one we do find certain differences that we think are interesting to analyze. Therefore, if you doubt between choosing one or the other, keep reading because we make a comparison between both iPad Pro with which we intend to get you out of your doubts.

Comparison table of the iPad Pro 2021

We believe that a cold specifications table is not useful in the end to assess a device, however it does help us to get an idea of ​​how they are equipped and what the differences between these two teams are on paper. In the following sections we will see more specifically how they behave in real life. Screen, the big difference this year

There are certain aspects that the screens of these iPad Pro share regardless of size. One of them is the refresh rate of 120 Hz , what Apple calls the ProMotion Panel and what it means is that it updates the content of the screen 120 times per second, noticing a greater fluidity. For comparison, an iPhone has a 60 Hz refresh rate. Nor does the maximum brightness change, having a maximum of 600 nits. But in the rest there are considerable differences.

The 11-inch model has a screen technology that has already been used in previous generations, including the large model. Precisely in this generation, it is the 12.9 generation that adds a screen with miniLED technology for the first time. This type of technology is made up of a backlit panel that is brightened by LEDs with a tiny size of just 200 microns, which is a clear difference from the 1,000 microns of a traditional LED diode. The IPS is a type of LCD panel, also composed of LEDs that are larger than the miniLED and with advantages such as offering a greater viewing angle without loss of quality. However, it must be said that the miniLED is an improved version of this type of technology, showing more vivid colors and with greater intensity (despite the brightness being the same).

How it behaves in the daily routine

Obviously there are appreciable differences when looking at one and the other panel, even for those who are not experts in this matter. However, the IPS panel of the 11-inch iPad Pro looks really good in all circumstances and few people will be missing something else. However, we must admit that the miniLED screen has a higher quality, with more intense colors and that despite this it is tremendously balanced. It is likely that your choice between one or the other can fundamentally depend on which size suits you best, but if your bet is on screen quality there is no doubt that with the 12.9-inch model you will get a better experience.

In performance both are left over

If these iPad Pro have been a jump in something, it is in processor. The A12Z Bionic they had in the last generation was already a tremendously powerful chip and in fact it is still Apple’s second best processor at the time these iPads were launched, since the M1 that the new generation brings is the only one that beats. This chip with ARM architecture is the first version of the so-called Apple Silicon, silicon chips with integrated RAM that a priori were reserved for the range of computers and with which the Californian company surprised everyone by announcing that these iPads would also carry them. In fact, the way to show it was curious, with a magnificent spot in which its CEO played the role of a thief to stealthily steal the chip from computers in order to put it on these iPads.

These are processors that make both iPads able to execute any type of action in abundance, from the most trivial tasks such as browsing the internet or working with office apps to complex 4K video editing. Even connecting them to an external monitor via Thunderbolt! This is accompanied by an iPadOS software that, although it has come a long way in these years after its divorce from iOS, the truth is that with this chip it seems to fall short. It will be necessary to see if in iPadOS 15 long-awaited functions are added and that would make the hardware of these iPad has been just an advance and can combine perfectly with a software to match.

Accessories compatible with these iPad Pro

Beyond being compatible with an endless number of covers, stylus, mice and keyboards that work via Bluetooth connection or by cable connecting it to USB-C, we think it should be remembered that official accessories can be used in these iPads.

First of all we have the Apple Pencil 2 , the stylus redesigned by Apple in 2018 and which is charged magnetically on one of the sides of the iPad (or on the top, depending on how you have the tablet oriented). They are also the case with the Smart Keyboard membrane keyboard that attracts attention with its key travel and its protection against stains and even liquids. Although the absolute star is the Magic Keyboard with trackpad , which brings the experience of using these iPads much closer to that of a laptop. Of course, while the small model is still compatible with the same as the two previous generations, for the large one we find that its compatibility is half, since it will fit but will not fully fit with those of previous generations due to its increase in thickness. Does it make sense that these cameras have?

In view of these specifications, identical for both sizes, we could perfectly think that we are talking about a mobile phone. In a way it is the most natural thing, since we rarely imagine taking pictures with an iPad for reasons of comfort, since its size does not invite to use it as often as a camera. However, we are facing two ‘Pro’ models from which certain professionals could get a lot of juice. The LiDAR sensor can be essential for those who actively carry out tasks with augmented reality as the protagonist, which is already something to take into account for these devices. When it comes to photography and video, it is impossible for us not to turn to the professional field again to understand the reason why Apple has added these camera technologies. Logically, they are available to any type of user who wants to use them, but it makes more sense for certain sectors in which it may become more comfortable to take photos or videos with a screen larger than that of an iPhone. An example of this we saw in the presentation of these iPad itself, showing themselves as excellent equipment to immortalize interviews with the appropriate accessories.

Something that draws attention and that probably serves a large majority of users is the tracking on the front camera . Thanks to the ultra wide angle and its 122 degrees of angle, a follow-up can be executed in which you (and your companions in the video call) are always located in the center of the image and no one is seen cut off even if it moves. Of course, this functionality is only available in FaceTime.

The price of both is far apart

The most basic model of the small iPad Pro starts at 879 euros and can reach 2,259 euros in the most advanced versions. 1,199 and 2,579 euros are the top prices of the large model in its most basic and complete versions respectively. The curious thing about these data, regardless of whether they can be perceived as cheap or expensive, is that between the two sizes we find 320 euros of difference that in many cases could be decisive for the choice. We remember that in previous generations there was a difference of 220 euros, which without being a small amount if it helps us to observe that this year there has been an increase of 100 euros in the price of the large model, probably due to the miniLED panel. Conclusion: which is the right model for you

If you are clear that the iPad Pro of this generation is the most appropriate for you, the decision between one and the other will depend on some factors. Due to the difference on the screen, we can say with total certainty that the large model is better, now, is it the most suitable for you? You will have to be the one who puts that and other factors in a balance to make the decision. The size of the 11-inch model is more suitable for mobile work, as it is easier to transport and is cheaper on top. However, if you get used to it, the large model is not complex to carry around either and being in a work studio it is appreciated having a larger screen and especially when its quality is even higher.