Windows 10 is an operating system that is gradually reaching the vast majority of PC users around the world. This is something that is achieved thanks to everything that the software itself offers us from the outset in the form of functions and features. In this case we are going to focus on a section not very well known, but very useful, such as the Game Bar.

As you know, not all the elements that are part of this powerful Redmond system are in sight. In fact there are some of the functions that have been arriving based on updates, that we do not know. It may be the case that some of you have not heard of the aforementioned Windows Game Bar . Well, for those of you who know it, we will tell you that this is an element that carries several versions of the system among us, and that it can be very useful. Among its many functions, as its name suggests, it tries to improve the gaming experience on the Windows PC platform. But not only that, since over time it has been adding new options with which to increase its effectiveness in other ways. To be able to take a look at this element that we are commenting on, we only have to make use of the Win + G key combination.

To give you a more exact idea of what we are talking about here, we are going to see some of the parameters that you can adjust here to get more out of this element.

As we told you before, to start up and view the Game Bar , we only have to press the combination of keys Win + G. At that moment, a horizontal bar will appear at the top of the screen, and scattered, a series squared. Well, this is the Game Bar itself, and some of its widgets. Say that these can be set so that they are always visible by simply clicking on the small icon with the shape of a pushpin in the upper right corner of each one of them.

Likewise, to see all the widgets that we have here, in the main bar we click on the Menu widgets button.

As we say, there are several functions that we can carry out from here, for example while we play . But to have a much faster access to all this during a game, we have the possibility to customize our own keyboard shortcuts. For this we have to make the Game Bar appear on the screen again . But in this case, we click on the button that is shaped like a cogwheel to access the configuration of the element. 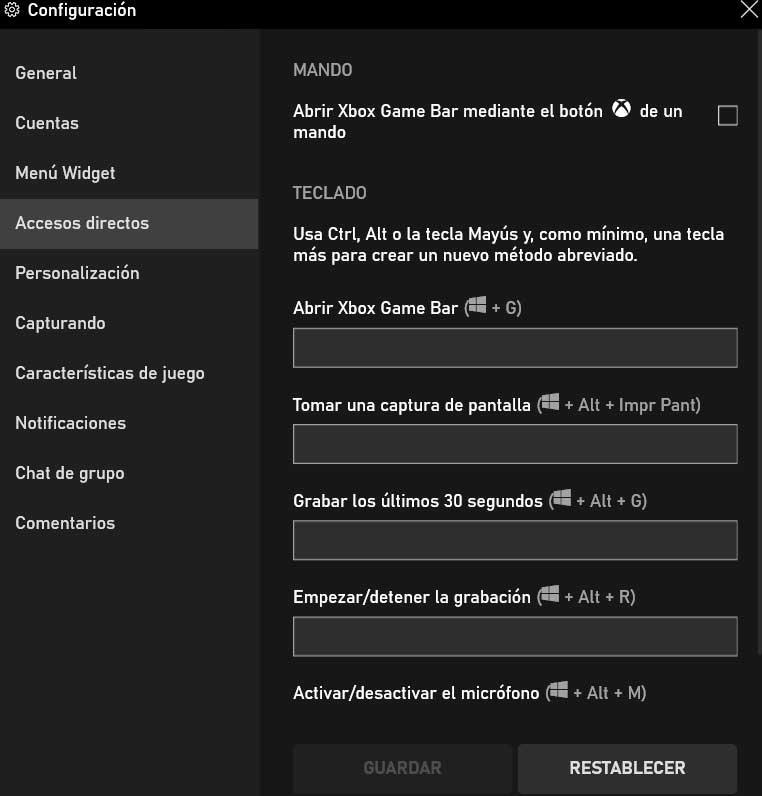 In the window that appears, in the right panel we go to the Shortcuts section to start entering our preferences.

Customize captures while we play

One of the main features of this Windows functionality is to capture everything we do during a game on the PC. But of course, depending on each user and their preferences of the moment, we need to capture some things or others. Therefore, also in the Settings section of the Game Bar, we now go to the Capturing section.

Then we will see that we already have the possibility to select what we really want to capture. Here we mean making recordings in the background, capturing what we say through the microphone, capturing the rest of the sounds from the applications, or disabling everything.