When it comes to moving around the Internet , the usual thing is that we use certain specific programs, known as web browsers. Here we can find a good number of proposals, some better known than others. We can highlight the cases of Chrome, Firefox or Microsoft Edge , which are the most used at the moment.

However, since it is generally free software, the user has the possibility to choose one of the many possibilities available. There are other alternative browsers more focused on security, other lighter ones, with certain more specific functions, more customizable, etc. But in this case we are going to focus on the proposal of this type that we comment on the most used throughout the world. In particular we refer to Google Chrome , an Internet browser that does not stop growing over the years. And when we talk about the fact that it does not stop growing, we are referring both to the functions it offers and its market penetration. In fact, the vast majority of users at the moment prefer to use this particular program to browse the web. This is something that is extended to both mobile devices and desktop PCs.

Chrome changes not everyone likes

One of the secrets of the success of the program we are talking about are the almost constant updates that the program receives. How could it be otherwise, these are sent by Google itself in order to improve the product. Several elements come into play here, starting with the functionality of the browser . But that’s not all, but bugs are also corrected, security is improved and the interface is updated. Well, in this specific case we are going to focus on this last section, the interface.

We tell you all this because this change in certain aspects of the interface is something that occurs every so often in Chrome . In fact, Google recently began rolling out some updates to the logos of some of its most popular services. These reach some as used as Gmail, Google Maps , Google Calendar or Drive , among others. These logos are displayed when the site in question loads. At the same time they appear in the browser toolbar when the site is blocked, for example.

Sometimes Chrome may even be the only thing to show if too many tabs are opened, as it reduces the web information in the tab bar. But of course, as we tell you sometimes these aesthetic changes do not like everyone. 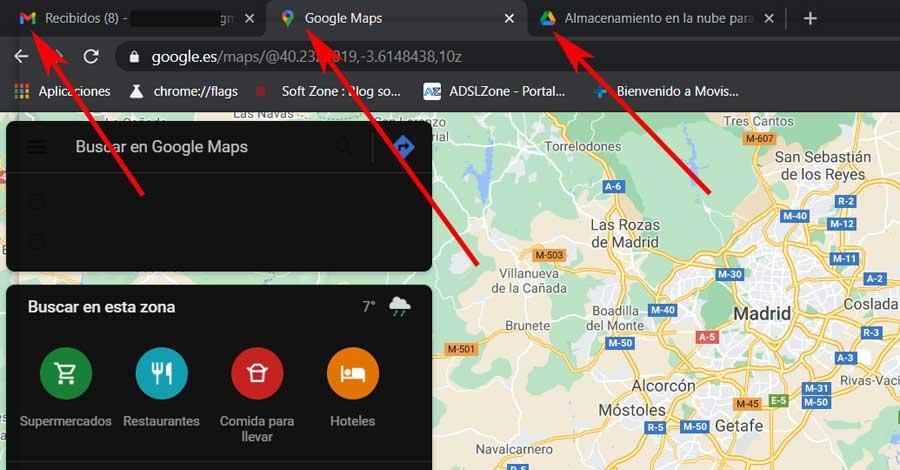 Thus, as with many changes, some users like the new logos, while others dislike them. At this point it is worth mentioning that users do not like the new logos because most of them find it difficult to identify them because they are very similar to each other. This is something that becomes especially noticeable when pinned to or reduced to the single icon in the bookmarks bar.

But as usually happens in most areas, this also has a solution that we are going to talk about. We tell you this because in the event that we want to restore the classic icons of Google services, we can do it. Here we refer to the previously mentioned Gmail , Calendar or Drive. Well, to achieve this, we are going to use a relatively new extension for Google Chrome. To say that it will also be valid for other browsers based on Chromium , and even for Firefox .

As its own name lets us see, this is a complement that is actually responsible for restoring the old icons of the firm. Say that this is a new extension for most browsers that we must install to recover the old icons. Thus, for it to be effective, all we have to do is open one of those services, or reload any Google service that is already open in a tab at that time.

At that moment we will be able to see how the icons to which we have mentioned, return to have that aspect that we missed. Of course, for this we must bear in mind that the extension requires access to Google services. Therefore you need access to those where the icon changes: Calendar, Docs , Drive, etc. But then we will see that the classic icons of the service are restored when the page is reloaded. This is something that occurs regardless of whether the site is pinned, or is displayed in a normal browser tab.

How to download and install Restore old Google icons on Chrome

As we will see below, the operation of the extension as such could not be simpler. To be effective, that is, to recover the old designs of the icons, we only have to download and install it. Therefore, if we leave it there, running in the background together with Chrome, we will continue to see the classic icons of Google services without having to do anything else.

That is why below we will show you the easiest way to achieve it. Say that to download and install the extension itself, you just have to click on the link that we leave here.

This will make, after accepting it, the add-on becomes part of Google’s own browser. Say that Restore old Google icons creates a new icon that is placed next to the rest of the ions of the other installed extensions. But in reality this is of no use, since the complement will start to act immediately, as we mentioned before. In any case, this icon will not be helpful when, in the future, we want to uninstall the program add- on when we no longer need it.

If this is the case, it is enough that we right-click on it and click on the Uninstall option from Chrome.