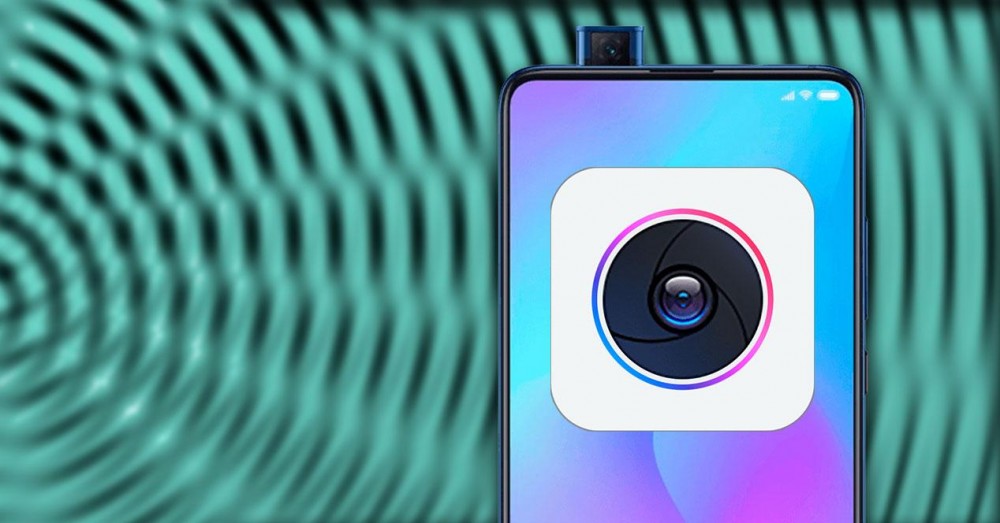 Surely on more than one occasion you have seen videos where, when recording a screen or monitor, annoying lines appear moving it from top to bottom of the panel. This effect is known as “flickering ” and, in recent years, the camera settings of almost all manufacturers have added a way to avoid it.

When we take a photo on a screen , this effect does not bother at all because when working with still images that movement of lines, motivated by the change in frequency between what we photograph and the system with which we capture it. However, when recording a video, the monitor and mobile Hz may not match the set fps, showing those ugly lines moving throughout the capture.

The annoying effect of recording screens with your mobile

The flickering problem appears when, when registering a device with a screen, there are sudden changes in brightness between frame and frame. For this reason, when taking a photo (a photograph) they do not appear, but when working with recordings of 24 fps or higher (video) they will spoil the shot. 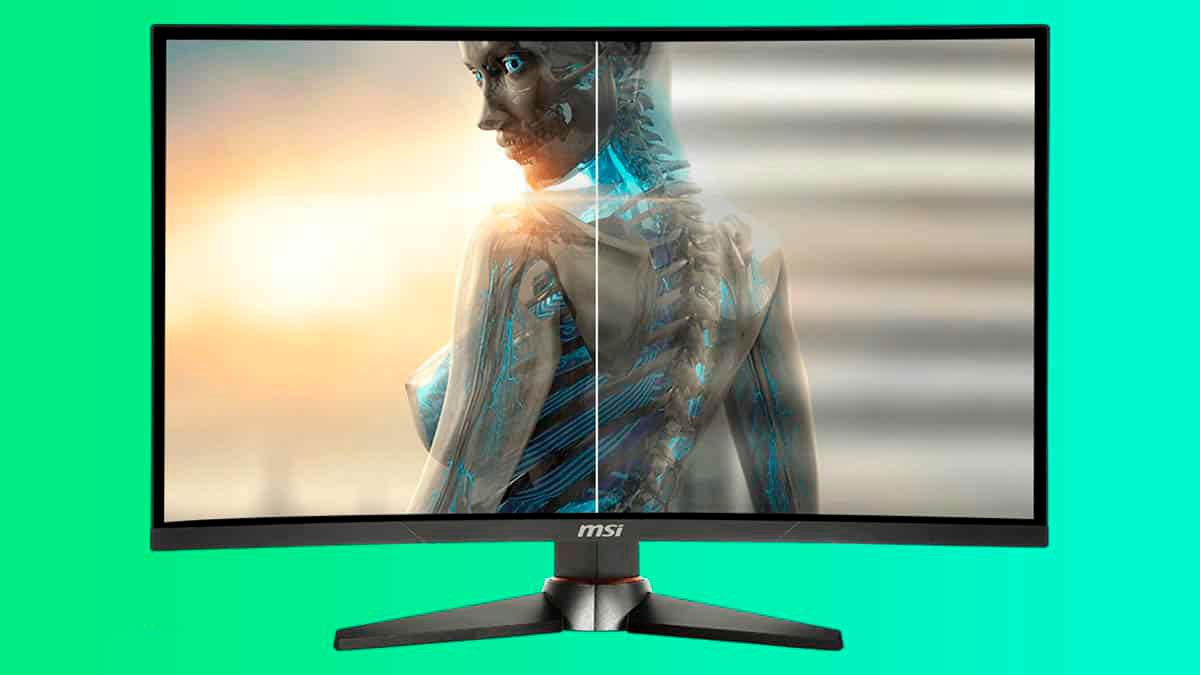 Flickering is more common on panels with a high refresh rate, regardless of make and model, and can affect displays based on panel technologies such as IPS and TN. Also, keep in mind that a unit of a certain monitor may have this problem, but another screen of the same brand may work perfectly.

Since it is quite rare that you know the characteristics of each TV, monitor, or any screen that you want to record, it is best to configure the mobile to avoid registering these frequency changes.

Enables the anti-gang mode of the camera

If you search among the settings of your camera app, regardless of the manufacturer, you will find a specially dedicated mode to avoid this effect when recording screens with your mobile. For example Xiaomi calls it Anti bands, but other brands can call it Anti flicker.

As you can guess, this is a tool that we must activate when we are going to work with photographing images on the screen or recording them, since if the frequency at which they emit is different from the screen, the gray bands that are so characteristic of the screen will appear. ” flickering ” in the image taken.

In fact, as advice we would tell you that it is an option that you must leave activated by default, it will not affect the rest of the shots you capture with the phone’s camera at all and thus you will not be caught off guard if, for whatever reason, you must record or photograph any type of equipment with a display. 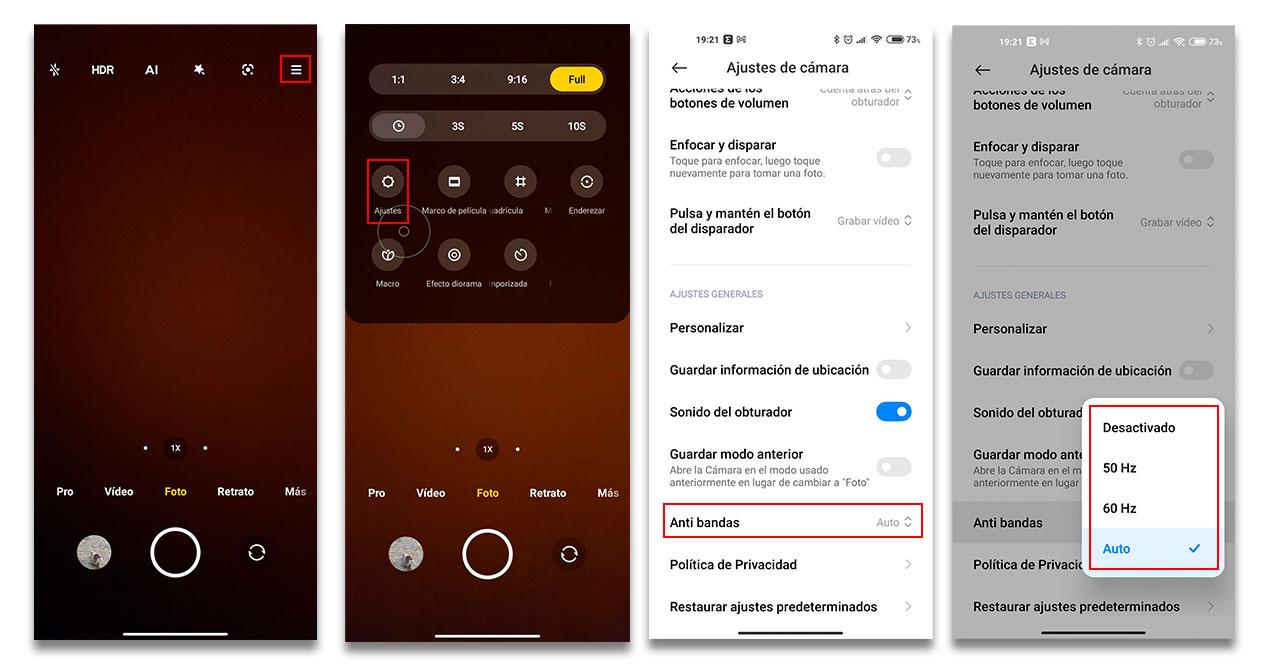 Although the example that we are going to follow is that of Xiaomi, you will not find many differences between setting the Anti-band mode on the smartphones of the Chinese firm and the mobiles of other manufacturers.

In most of the phones we have tested, the option to deactivate this mode or activate it automatically appears. Whenever possible, set this option as the default. If it is not available, you will have to choose between a 50 Hz or 60 Hz mode. How do you know which one to choose?

It must be taken into account that in Europe the electric current oscillates at 50Hz, while in the USA it does so at 60Hz. In Spain you will have to use 50Hz, but if it doesn’t give you the right result, you won’t lose anything by trying the 60Hz mode. 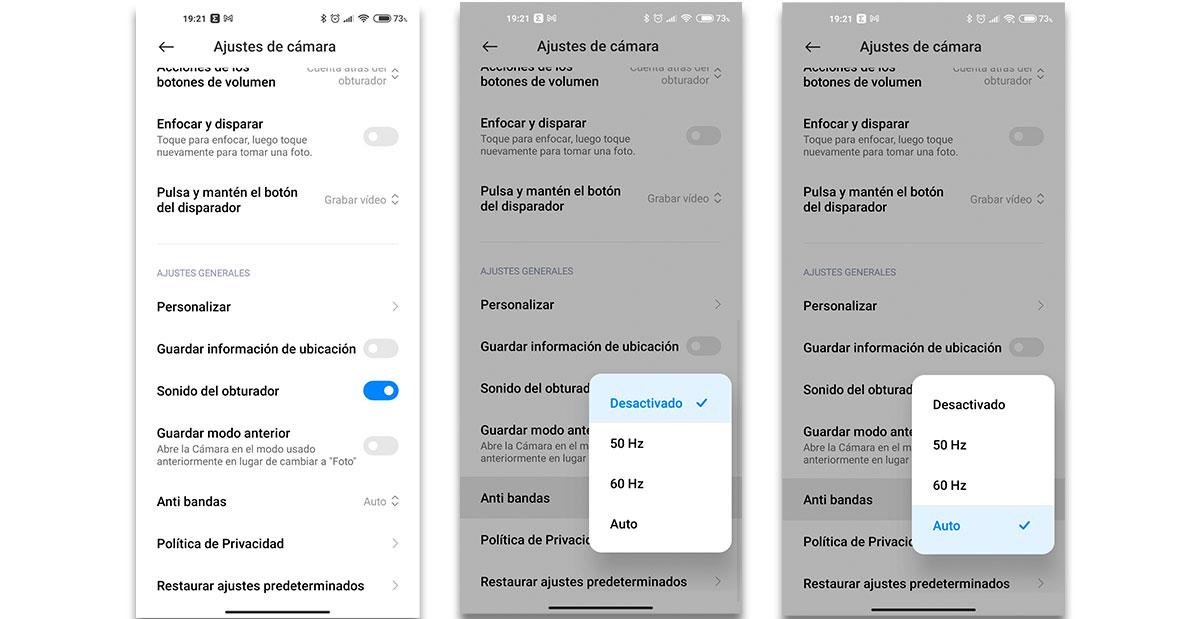 The safest thing is that you have no idea how often the monitor or screen that you are recording with your mobile works on, which is why it is best to leave this option set to Automatic. If you don’t have it, you will have to try between the 50 Hz or 60 Hz mode by making a short previous recording. If with one you manage to eliminate the bands and with another not, you yourself have discovered when of the two options you must configure.

Other ways to avoid “flickering”

Beyond setting the Anti Banding mode from the camera settings, you can always try to minimize the effects of flickering when recording monitors using manual recording. Nowadays, more and more mobiles allow us to alter the rate of frames per second (or fps) that we can capture, so the first option is to select the appropriate FPS and speed for the capture. If you shoot at very high fps you will almost certainly have to endure this problem.

On the Internet there is a tool called RED that, based on the Hz of the screen that we are going to record and establishing the rate of photographers per second with which we want to work, will indicate the aperture that we must manually adjust on the mobile.

Lighting is another important factor to take into account because if the lights you use during the capture are fluorescent or of poor quality, it will negatively affect when avoiding this effect.

If, unfortunately, you have already recorded the video, reducing the bands is going to be a bit more complicated. No video editing app that you find in the Play Store App Store will give a satisfactory result, but if you have enough knowledge you can do it from your computer. To do this, export the clip to your PC or Mac and use powerful programs such as Adobe Premiere or Final Cut by following the steps indicated in this video.

If you manage to get to this situation, all the better. With the keys that we have given you, you will be able to avoid capturing these annoying bands in your recordings .