When we refer to the current desktop operating systems, despite the wide availability, the most widespread is Windows 10 . From a few months to this part it has become the undisputed leader of these environments, although it is not the only one there is.

Thus, many users around the world continue to opt for other alternative proposals, such as Linux distributions, for example. We also find users of Apple computers and their macOS , in addition to the old versions of Microsoft’s Windows itself. Not everyone is willing to use Windows 10

And it is that as perhaps many of you know first hand, in the middle of 2020 Windows 10 continues to raise many suspicions. In fact, a good number of users, who number in the millions, still distrust this version of the operating system . That is why they prefer to use older versions, as it happens with Windows 7 or Windows 8.1. All this despite the fact that Windows 7 already stopped receiving official support from Microsoft a few months ago.

So despite the continued efforts of Redmond’s efforts to get users to migrate to the latest version of the software, not everyone is willing. Everything is respectable, of course, so we are going to show you how to get hold of the official ISO versions of these. In this way, if necessary, if you want to install Windows 7 or 8.1 from scratch on your PC, from here you will easily get it.

But of course, just because we have the official ISO image of either version of the system does not mean that we can use it for free. As you can imagine, in parallel we will need to have the corresponding product keys. In fact, as Microsoft itself recommends, these should already be in our possession before formatting the PC to make the installation clean.

At the same time it is recommended to have some support to store the ISO that we will use for the installation, with enough space, around 4 gigabytes.

At this point, say that in the event that we opt for the ISO of Windows 7, this is something that we will have the opportunity to do from here . Of course, as we mentioned before, before anything we are going to need the aforementioned original product key. 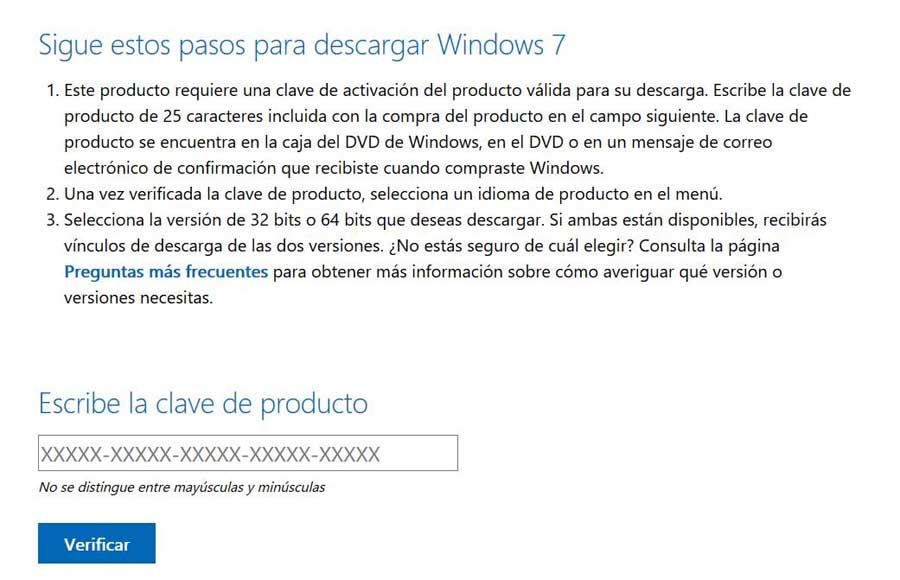 Furthermore, before starting the download process as such, we will need to enter the password in the corresponding verification box. Once we have done this, we can start to lower the ISO. For this, we only have to follow the wizard that will appear on the screen where we indicate the architecture of the equipment, 32 or 64 bits , among other things. Then we can save that ISO on the media we have chosen, to perform a clean installation on the Windows 7 computer.

But it can also be the case that we prefer to get a copy of the official ISO of a slightly more modern version of the operating system. Although less popular than the “beloved” Windows 7, Windows 8.1 still has its followers, so we will also show you how to get the ISO of this system.

Of course, as in the previous case, so that we can use it throughout the months and years to come without problems, here we will also need the product key . Therefore, the first thing we will do is connect from the browser to the Microsoft website for download .

In the web that will appear on the screen, the first thing we do in this case is indicate the edition of Windows 8.1 with which we want to do. Once the selection is validated, on the same website we will have to specify the language of the download, in addition to the architecture. Automatically we will already have a valid link for the next 24 hours with which we start the descent of the ISO.