When selecting a multimedia player to use on our Windows computer, there are several factors that we take into consideration. The solution called VLC is one of the most popular due to everything it offers us, both at a functional level, as well as interface and compatibility.

Over the years this VideoLAN software has earned the respect of millions of users around the world. So we can use it on practically any device and benefit from all the advantages they present. We are rarely going to run into any kind of compatibility-related problem in this app. In addition, this extends to both music and video files. At the same time the crashes or unexpected closures common in other players, in VLC we are not going to find them generally either. Some users use this program simply to watch their movies and series or to listen to their favorite music. However, this software solution goes much further for those who want to have maximum control over the multimedia playback of their files. It is interesting to know that it offers us a multitude of functions to adjust the reproduction of both audio and video to the maximum. In the same way, as we will see below, this is an application that offers us a large amount of data in real time about the uploaded files .

This information to which we refer can be very helpful when it comes to detecting faults in our multimedia files . In the same way, we will be able to know the hidden metadata that each of these files includes without our realizing it.

Know in detail the audio and video codec used

In order to see all these data on the screen that we are commenting on, the first thing we do is start playing the audio or video in a conventional way. Next, in the main interface of the program, click on the Codec Information menu. At that moment a new window will open in which we find everything related to the codecs used by that file. Videos generally contain their audio tracks, so both sections are separated in order to better distinguish the information. 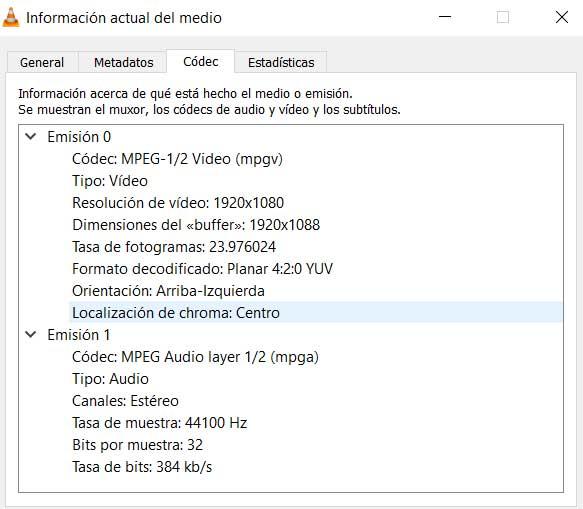 Regarding the video, we can also see the resolution used, the frame rate, its orientation, etc. On the other hand, if we focus on the audio codec we will see the channels used, the sample rate, the bit square or the bits per sample.

Check the reliability of the media file in VLC

Sometimes we can find that, when playing any multimedia content on the computer, there are jumps in both the image and the audio. There may be several reasons for this failure, so it will not hurt to be able to check the health status of that file.

Thus, to know the correctly decoded or failed blocks and buffers , we go to the same window mentioned above. However, in this case during the video or audio playback we click on the Statistics tab. 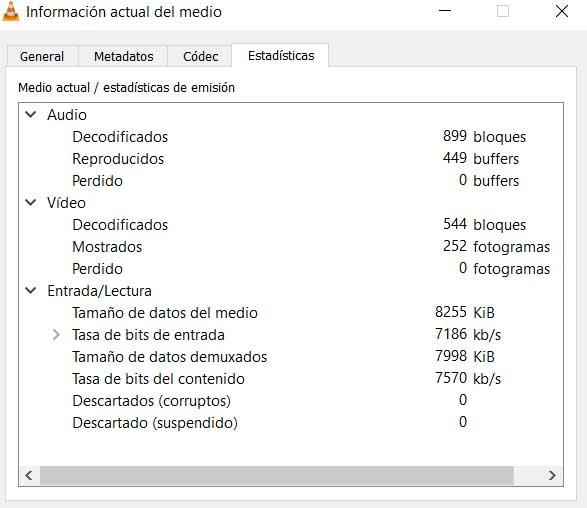 In it we will see that the blocks, buffers and frames that are being decoded are shown in real time. In the same way we can see that the lost and discarded, which are precisely those that will cause errors in the sound with the image of the file .