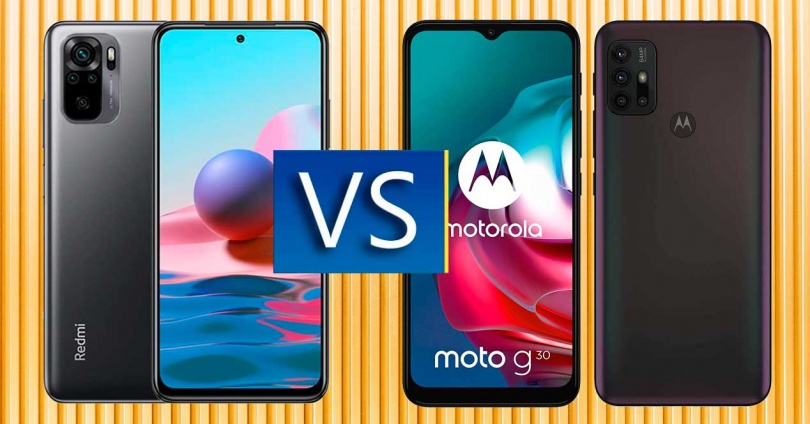 This year we are surely enjoying the mid-range not only more numerous, but also better equipped, and that is something that is undoubtedly noticeable in the mobiles that we are going to compare today. Because both the Redmi Note 10 and the Moto G30 are two very well equipped phones, as you will see now.

Two terminals that have similar characteristics and above all a fairly adjusted price for what we could expect. Therefore we are going to compare its characteristics to try to give a little more light if you are doubting between both phones, because the truth is that it is difficult to decide on one. Regarding the screen, the size is similar, although logically more compact in the Redmi, with a size of 6.43 inches, Full HD + resolution, perforated camera, and very importantly, Super AMOLED technology with an aspect ratio of 20: 9. The Motorola offers us a somewhat larger panel, 6.5 ″, but it is LCD and its resolution remains in HD +, in addition to having a drop-shaped notch. But without a doubt the great point in favor of this Motorola screen is that it has a refresh rate of 90Hz . In this section are similar phones, in the case of the Redmi we have a Snapdragon 678 processor manufactured in 11nm process, while the Moto G30 has a Snapdragon 662 also 11nm. The Redmi is somewhat more powerful with this processor, which is more recent. On the other hand, when we talk about memory and storage, although both have 4GB of RAM, the Motorola has more storage, 128GB for the Redmi’s 64GB, in both cases expandable via microSD cards. Therefore, in this aspect, they are very well equipped mobiles that will offer us more than enough performance for the vast majority of users, taking into account the most common tasks, such as browsing the Internet, moving through social networks, playing multimedia content or playing to our favorite titles fluently. Here are some important differences, especially in resolution, which is higher on the Motorola. They both have quad cameras, with a 64-megapixel main sensor on the G30 and a 48-megapixel sensor on the Redmi. The rest of the sensors are the same a priori, with an ultra wide angle of 8 megapixels, a macro of 2 megapixels and a depth of 2 megapixels. In fact, even these last three sensors have the same aperture. In the case of the main ones it is different, with f / 1.8 for the Redmi and f / 1.7 for the Motorola. Regarding video recording, the Redmi offers better features, with a resolution up to 4K at 30fps , while the Motorola stays at 1080p at 60fps. The front camera of both is practically the same, since they have a 13 megapixel sensor, the difference is that the Redmi has an aperture of f / 2.5 and the Moto of f / 2.2, so this is better. in low light situations. In this section there is enough equality, especially with the battery capacity, since in both phones it is 5000mAh . The two phones have a 5000mAh, which is very good, while the fast charge differs a bit, being more powerful in the Redmi, with 33W, charging 50% in 25 minutes, compared to 20W of the Moto. The connectivity of both phones also offers us similar functionalities, with Wi-Fi 802.11 a / b / g / n / ac, Bluetooth 5.0, FM radio and USB type-C connector. The Redmi offers an infrared port, while the Motorola has NFC, so we can make mobile payments in establishments. The first has a side fingerprint reader, while the second has it on the back, in the brand’s logo. A point in favor of the Redmi Note 10 is that it has stereo speakers, something unusual in these ranges, as well as a minijack connector. Regarding the software, both phones offer us Android 11 as an operating system, one with MIUI 12 and the other with Motorola’s UI, which is quite similar to the experience of a stock Android. We are facing two phones that currently offer us a very similar price, in fact we can find both for a similar cost, 165 euros in the case of the Redmi and 169 euros in the Motorola . So taking into account this aspect, which is de facto the same, we can conclude that the Redmi is in general a more complete mobile . Especially because it has an AMOLED screen with a perforated camera, which is always better, in addition to having a Full HD + resolution higher than that of the Moto. In addition, its processor is somewhat more powerful, has a faster fast-charging battery and is much lighter despite having the same battery size.

Therefore, it is an extremely advanced mobile for the price it has. For its part, the Motorola stands out above all for the 90Hz of its screen, and for a main camera sensor that is 64 megapixels. In the rest of the sections it is behind the Redmi. Therefore, it must be recognized that the Redmi can be a better purchase for most users, although if you are one of those who are looking for a better camera and the latest trends, such as more Hz, it is possible that the Moto G30 is your ideal mobile, and Let’s not forget that all this is offered at a particularly reasonable price.