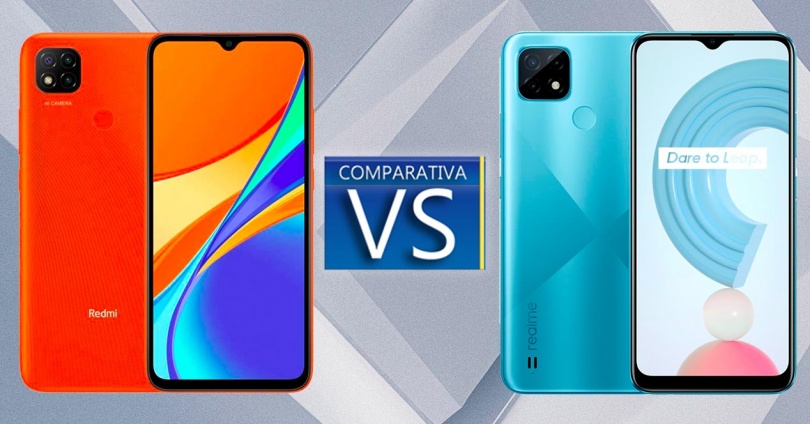 In a market as wide as that of mobile devices we can find a wide variety of terminals and totally different prices. Although, in recent years, technology has advanced so much that it is difficult to choose even among the cheapest mobiles from different companies, since they increasingly have better features at very reasonable prices. This is the case of the Xiaomi Redmi 9C and the Realme C21 , which has just been released.

Therefore, we are going to compare each of the characteristics of these two mobiles to see what they can offer us. And all with the aim of knowing which of them would be the best purchase option if we plan to change mobile. In addition, both models hardly exceed 100 euros , which makes them even more irresistible.

We are facing two phones that offer us a large screen to be two entry-level mobiles, far exceeding six inches. In the case of the Realme C21, we see that it has a panel with HD + resolution of 6.5 inches , compared to the Redmi 9C screen a little larger but not much, since it is 6.53 inches and also with HD + resolution . Likewise, both models have the notch in the form of a drop of water on the front and have fairly thin edges for their category. And it is that not only do they share almost the same screen, but you can also see how they are practically identical in terms of design. If we look at their respective dimensions, we see how the Redmi measures 164.9 x 77.1 x 9 mm and weighs 196 grams, while the Realme has a size of 165.2 x 76.4 x 8.9 mm with a weight of 190 grams. Therefore, the latter is lighter and also has a somewhat larger size compared to its opponent.

Now it is the turn to get into the hood of these two entry-level mobiles, although being so inexpensive we cannot expect a performance from another world either. However, they will be more than enough for our day to day. Both terminals come integrated with MediaTek processors, a Helio G35 , a processor that has been manufactured with a 12 nm process and has 8 cores capable of reaching a speed of 2.3 GHz. Likewise, it is accompanied by a Power GPU VR8320 running at 680 MHz. So we find a chip that has been designed for gaming, although it has limitations. The Redmi 9C can be found in two versions, one with 2GB of RAM and 32GB of internal storage or 3GB + 64 Gb for its internal memory. While the Realme C21 also offers us two other versions with small changes , 3GB of RAM and 64GB of storage or 4GB + 64GB. And that’s not all, since in both cases we can expand said storage since they have a MicroSD slot. So we find a small difference in terms of the versions offered by both models.

In this section we will not find many differences, if not practically none. Both models have triple cameras on their backs, which is quite an achievement for such cheap phones. Likewise, these two models also share the configuration in their sensors , of 13 megapixels for the main one with an f / 2.2 aperture and a 2 megapixel sensor for macro photography with f / 2.4 aperture.

And finally we find a small difference in its third sensor, although they do share the 2 megapixels with f / 2.4 aperture, the Realme C21 has a monochrome sensor , while the Xiaomi has a depth sensor. Although this difference will not solve anything when making the final decision. As for its front camera, we can see that both models have a 5 megapixel sensor with f / 2.2 aperture.

In this section we do find a big difference with respect to its charge, despite the fact that both can openly boast of having a large battery, 5000mAh , the Realme C21 does not have fast charging. While Xiaomi’s 9C has a point in its favor in this regard, since it does have a 10W fast charge. Although the equality continues in its connectivity, since in both phones we have 4G LTE , NFC, infrared port, Bluetooth 5.0 and all the necessary GPS connections, adding the audio jack to connect the classic headphones. In addition, the two models have Wi-Fi 802.11 b / g / n, a fingerprint reader on the back, as well as a microUSB port.

The customization layers of both models are among the most interesting, on the part of the C21 we find that it has Realme UI 1.0 and Android 10, compared to MIUI 12 accompanied by Android 11 of the Redmi 9C. Although it is expected that the new version of Android will arrive on this phone in the coming months with Android 11. What is clear is that both layers are the most complete and the decision will be a matter of taste. Which one do I buy?

Before opting for one of these models, we must look at the price, and as we warned you before, they do not exceed 100 euros by much. Its cost remains at 119 euros for the Xiaomi Redmi 9C , in its option of 3 + 64GB, while the Realme C21 we will find it for 109 euros in its version with 3 GB of RAM and 32 GB of internal storage.

The tiny difference in price does not tell us too much, but it does tell us everything that we have learned about these two terminals. Therefore, we recommend you buy the Xiaomi Redmi 9C , because despite sharing a large 5,000 mAh battery, this model does have fast charging. Something that will come in handy at any time if we need it to charge as fast as possible. Although if this factor does not matter so much to us, we can opt for the Realme C21, a lighter mobile with a somewhat larger size that will also be able to cover all our needs.