Windows 10 is a very powerful operating system that comes from Microsoft and that replaces the older versions of the software. It does not stop growing in terms of functionality and users, but at the same time there are many criticisms it receives. For example, a good part of these come for everything related to privacy.

We cannot forget that at the moment it is the operating system for here because it is the desktop with the greatest penetration in the world, by far. Once it broke the Windows 7 barrier and this old version stopped receiving official support, Windows 10 began to grow. But that does not mean that everyone accepts this operating system, despite everything it offers us, for their computers. There are still many millions of users who prefer to continue using Windows 7 or one of the many Linux distributions that we can use. As we say, privacy is one of the reasons that are pointed out more frequently, but it is not the only one. Here we can also add up everything that happens with the failures in the updates, the official system store, the pre-installed UWP applications , or the high consumption of resources. Along these same lines, we want to focus on a section as important as privacy.

This is something that many users struggle with in today’s software, but one that developers use to collect data from their customers. That is not to say that it is for malicious purposes, but that telemetry is not liked by almost anyone. So let’s see what we have to do to increase privacy in Windows 10 .

The first thing we have to do is limit the telemetry that the operating system is activated by default. It is true that natively we cannot eliminate it completely, but we can limit it to a great extent. For this we only have to go to the System Configuration application through the Win + I key combination. Next we enter the Privacy section, and in the right panel we click on Comments and diagnostics.

At this point we only have to select the option of Diagnostic data necessary to limit what we are telling you. 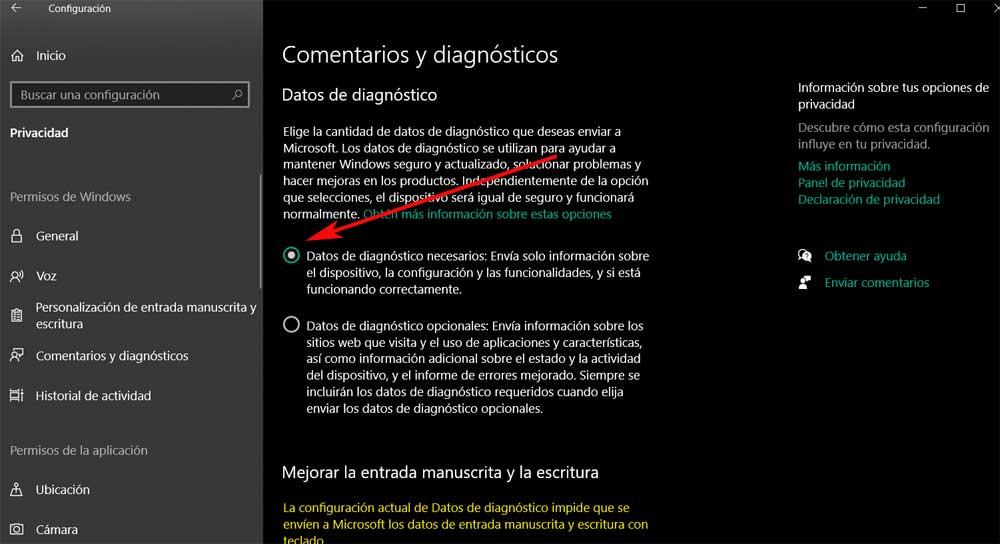 Remove advertising in the operating system

On the other hand, the Redmond operating system also tracks usage in the background in order to recommend certain products in the software itself. Microsoft assures that these will help us to know the services of the firm and thus be able to improve the experience of using Windows . However, users, at least the majority, find it somewhat annoying to be receiving ads in a paid product like this one.

To deactivate these advertisements that we are commenting on, we reopen the Settings application mentioned above. In this case we return to the privacy section but we think of General to disconnect the first selector that we find in the upper part of the window.

There are many services and applications that are part of this powerful software, how could it be otherwise. Many of them need certain permissions to function properly, permissions that by the way in some cases could be considered as an important violation of our privacy. Depending on the needs we have in each case, we have the possibility of activating or deactivating these permissions .

In this specific case, we refer to elements such as the location of the PC, the camera, the microphone, the so-called automatic file downloads, background applications, etc. To be able to customize all this that we tell you again, we go to the configuration application, but in this case we take a look at the bottom of the left panel where we find the Permissions section of the application. Now we just have to click one at a time to customize its operation and increase Windows privacy.