There has always been a rivalry between Apple Music and Spotify . We are many users who hesitate between using one or another musical service and that is why we have decided to make a confrontation to see which of the services is better today. 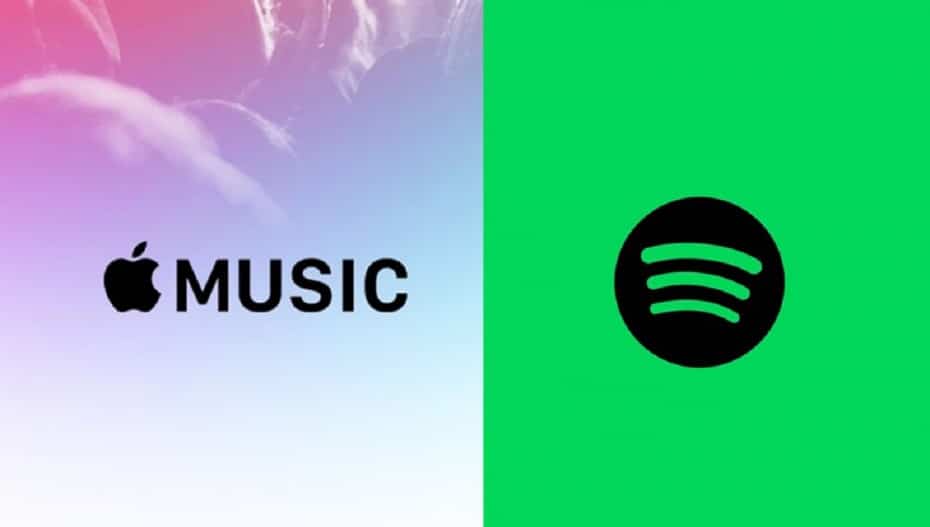 Obviously, a music service must be measured by the number of songs it makes available to users. This is the same thing that happens with multimedia services such as Netflix or Apple TV + whose contents are an important weight to decide between one or the other.

In this case Spotify has a large musical repertoire of more than 30 million songs, adding thousands every day. Obviously looking at these figures we can get an idea of the monstrosity that Spotify is today, and with all the years of service that it carries on its back. 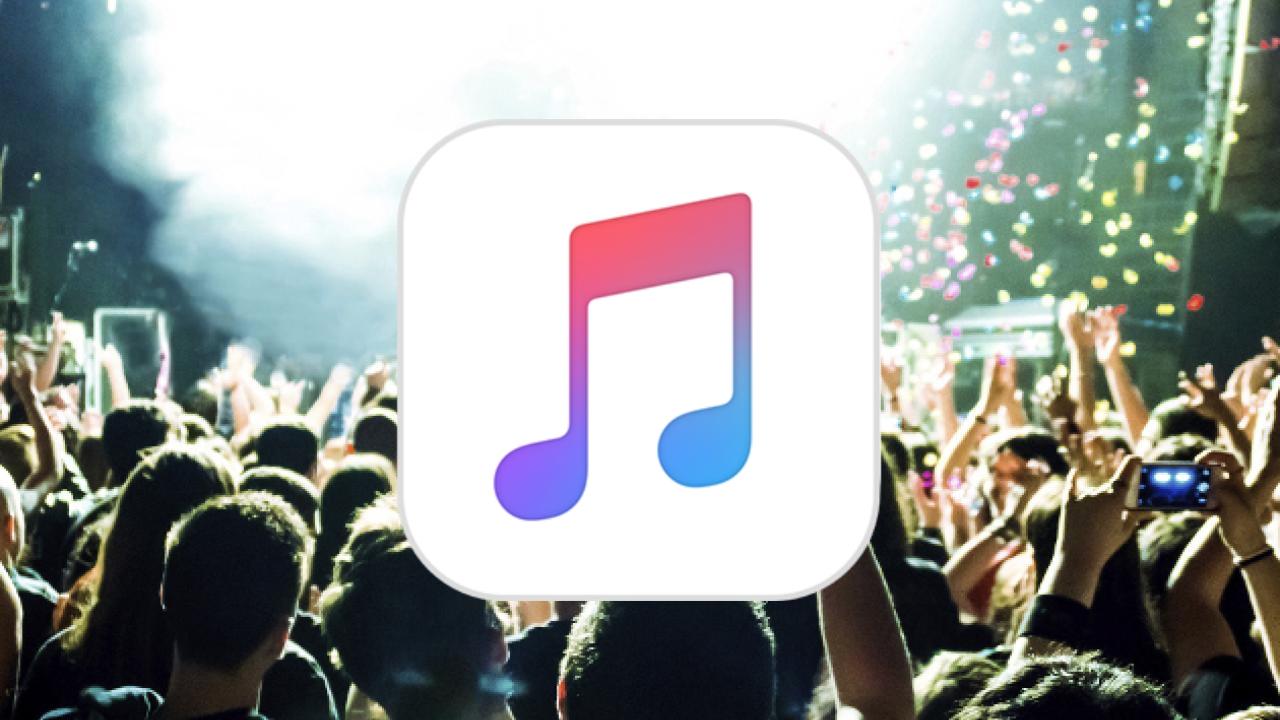 But Apple Music is not far behind. If we look at a recent study that roughly pointed out how many songs each of the Apple services has on the street. Specifically Spotify has 35 million songs while Apple Music reaches 45 million , so there is a more than clear difference between the two services.

But if there is something that characterizes Apple it is exclusivity and this has taken it to the field of its musical service. With this we mean that the Cupertino company signs agreements with great artists to have their new albums and songs exclusively. In this way, those users who have Apple Music can enjoy songs in scoop before going to market. Obviously this is not a very honorable practice, but we must take it into account in this comparison.

In recent years, podcasts have been gaining a lot of strength in our lives. There are many programs that we can find in different applications such as Apple Podcast or iVoox among others. And although it seems incredible, Spotify also has a large space reserved for these podcast programs that has gained a lot of relevance.

Users seek comfort and have all the content we listen to in the same application. And this fact is undoubtedly a point in favor for Spotify that encompasses everything in its service . At Apple for now we must settle for listening to podcasts in an application other than Apple Music. In the future they may end up merging these audio contents in order to facilitate the task for users. 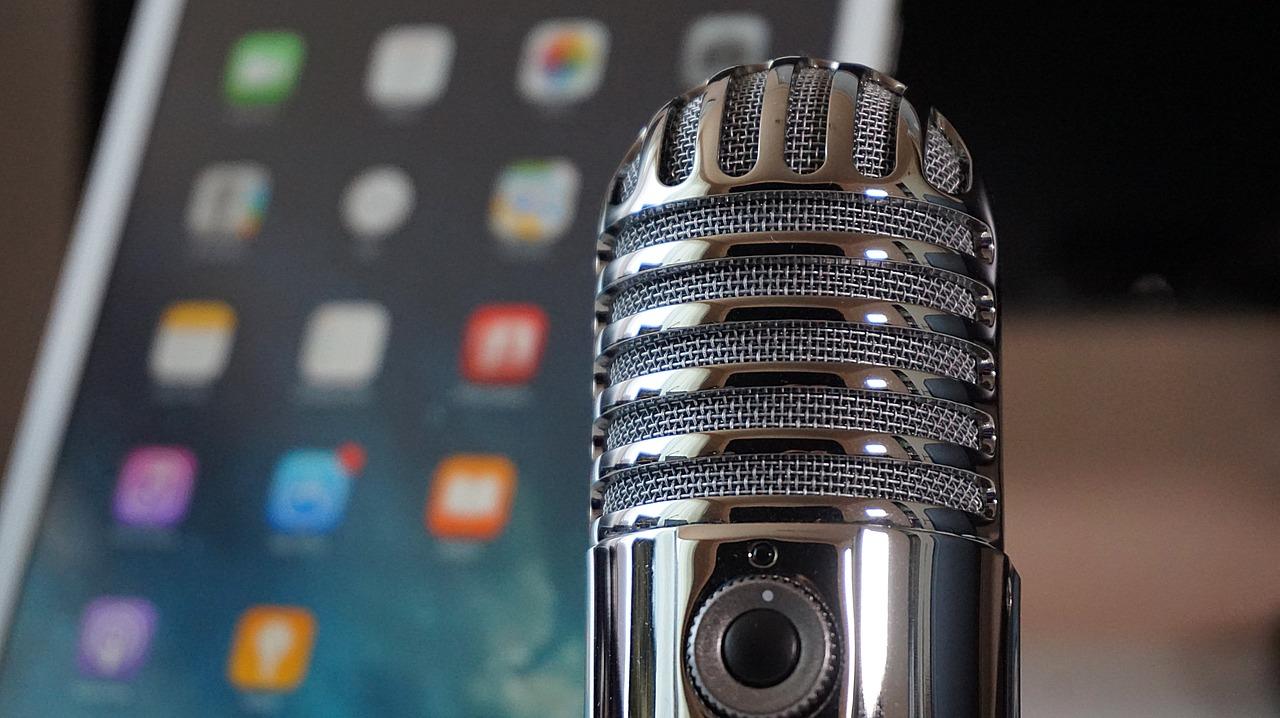 In addition, the controls that Spotify offers to control the playback of podcasts are quite good. By this we mean that you do not have to envy anything to those apps that are only dedicated to storing and playing podcasts.

Although the Cupertino company is reputed to have a fully airtight operating system, the truth is that Apple Music is quite open. Through the iTunes application we find the possibility of using this service in Windows beyond using it in the Apple ecosystem. It goes without saying that the Music app is available on both Mac, iPhone, iPad, iPod, Apple TV, and even Apple Watch.

Both Spotify and Apple Music have dedicated applications for both Mac and Windows computers. It is true that in the case of Windows, using Apple Music can be somewhat more tedious since it must be used through iTunes and it is not easy to find the option.

In this section we certainly believe that the winner is Spotify since we have a bar with numerous sections on the left side. These include access to our personalized and shared lists that we can order according to our preferences. In addition, it includes the possibility of going to the ‘Explore’ section where you can access new music depending on our own tastes as there is a wide catalog of emotions to choose from.

In the case of Apple Music, we have a dedicated application in macOS where we can have access to all our music library as well as the lists that we have made. But we need to make it much more accessible with a bar on one of the sides to quickly go to the lists we have created. It is true that visually it is very beautiful and little by little they are ordering all their content but that extra point of accessibility is still missing.

Where we use these music services more frequently is undoubtedly on our mobile phones. It is for this reason that companies must strive to improve the mobile version to offer a satisfying experience.

In the iPhone version of Spotify, as soon as you access it, we have at the bottom a series of tabs to quickly access our library and favorite lists. Although intelligently on the home screen we will have access to a series of musical sections where we can choose the last album we have listened to, for example. But in the case of Apple Music, we do find many tabs at the bottom where the radio is integrated, the library, the section ‘For you’ or the search engine itself. On the main screen we will also have intelligent access to different content that may attract us because we have already reproduced it in the past or for other reasons. 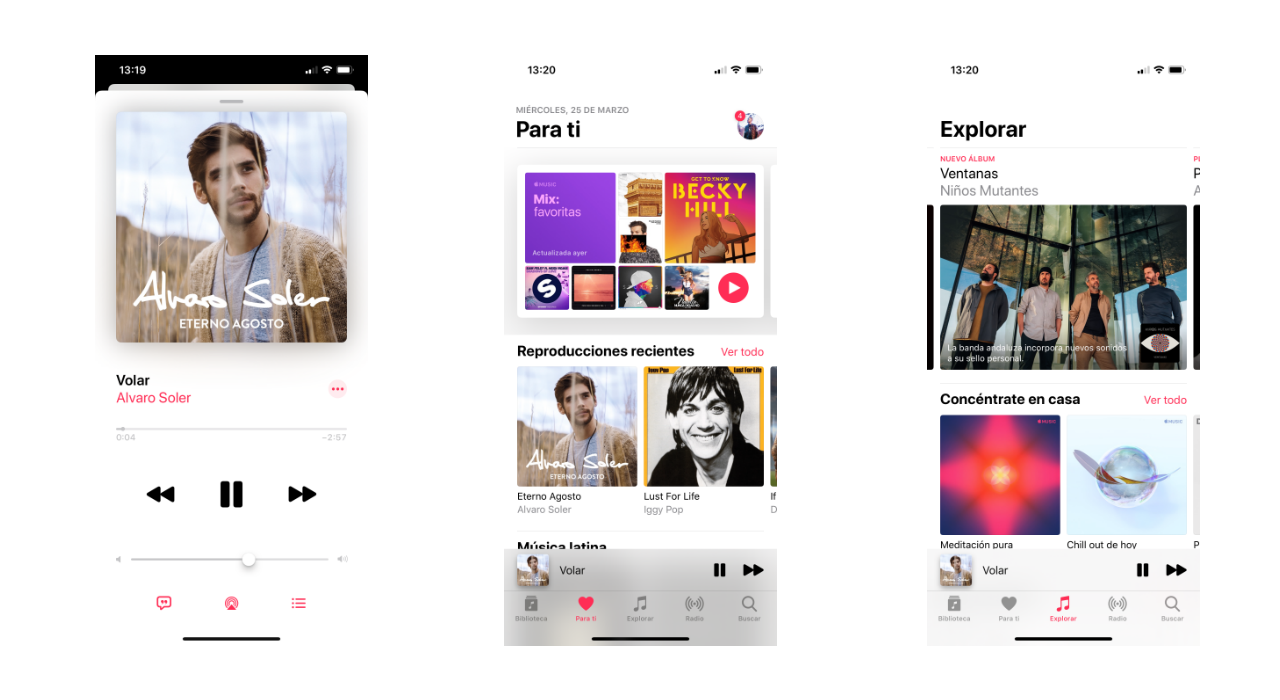 Both Spotify and Apple Music are integrated with Siri to be able to make the requests that we want through the voice, something ideal for when we cannot take the mobile. But the only problem is that in the case of Spotify this integration is not as well done as in the case of Apple Music, although this is totally logical since we are talking about an app that is designed by Apple. This section is also important to highlight for the use of the HomePod, but Spotify integrates with many other speakers such as the Amazon one. 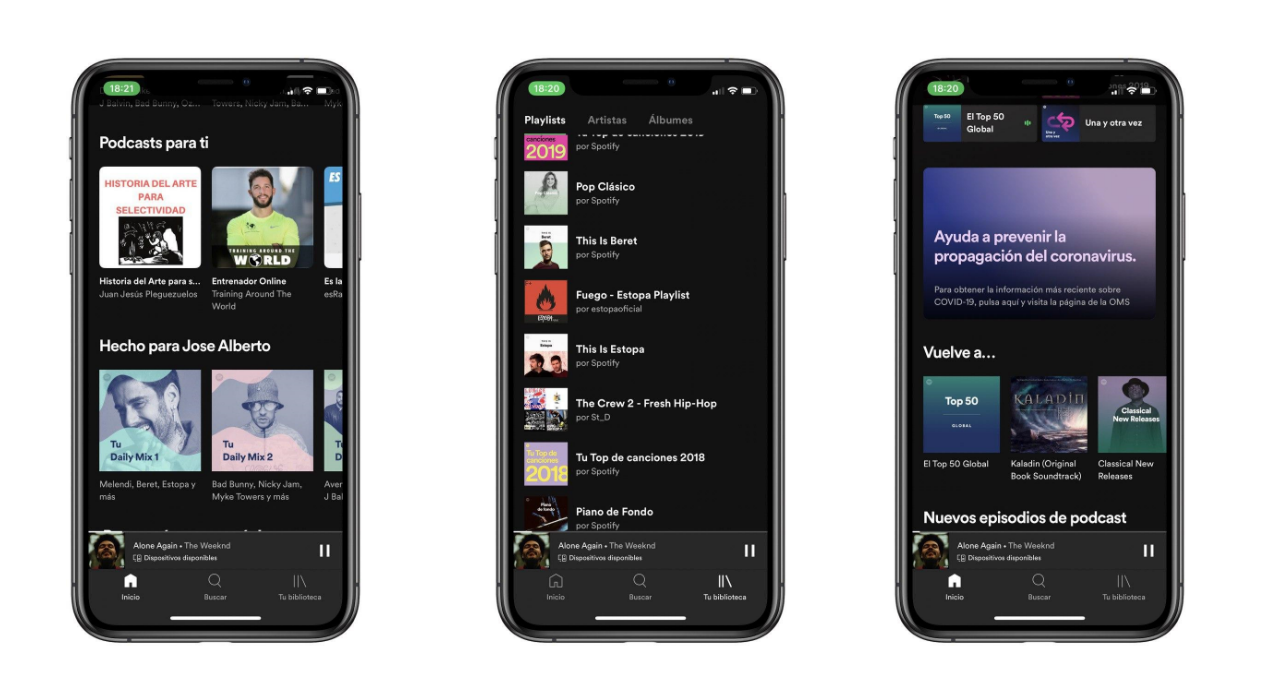 Sometimes we can get tired of always listening to the same music and these applications should give us the opportunity to write new songs. That is why the algorithms that analyze our tastes have been intensified to show us different proposals.

In the case of Spotify, a totally personalized list is created weekly to our tastes with songs that we have never heard. In this way we can have new songs in our hands with the personalized lists, although we will also have a discoveries tab that is updated. In addition, as we have previously mentioned, there is a section where we can play music depending on the environment we are in or our mood. All this can be found in the ‘Explore’ section both on our mobile and on the computer.

At Apple Music we have a somewhat similar system although it avoids taking advantage of our personal tastes . When we access the service for the first time we have the possibility to choose our personal tastes in the musical aspect. In this way, the application will offer us a selection of songs from the beginning for ourselves if we do not want to introduce our favorite singer-songwriters.

The ‘Radio’ section may be a section somewhat unknown to you or that you do not understand. The truth is that Spotify have tried to enhance this aspect quite a bit. In short, when we play the radio of a singer or a list, songs related to a specific genre will start playing, for example.

At Apple there is the same integrated option although in a more integrated way thanks to the Beats 1 radio. Surely it sounds a lot to you since this is where the successes of the moment sound, being a radio that is totally controlled by the company as if it were Europe FM or the Top 40 here in Spain. To give you an idea, Beats 1 is the radio that can be listened to before an Apple presentation event begins to liven up the wait. 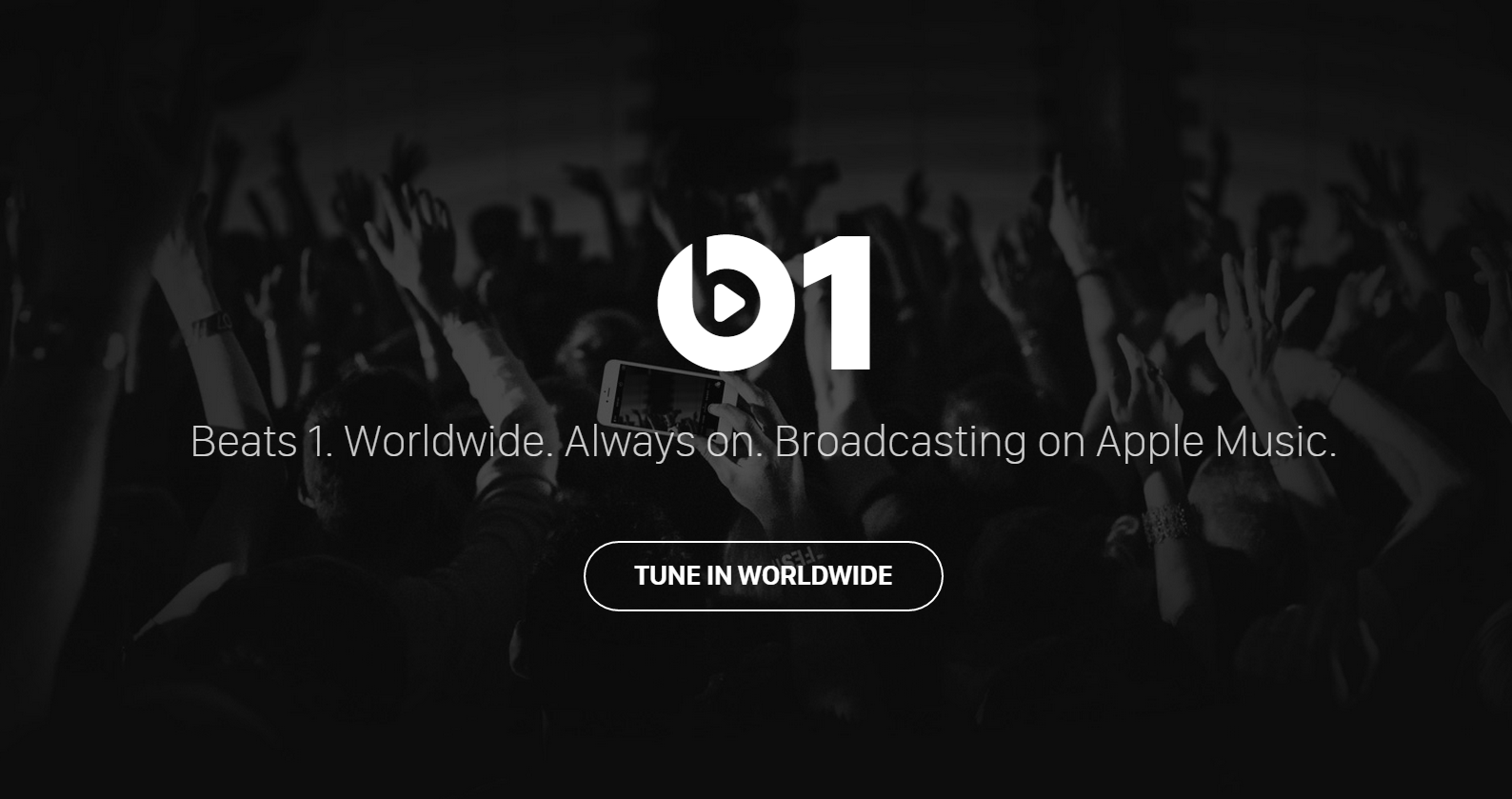 We think that it is worth, and quite a bit, to take a look at this way of reproduction since we will be able to discover a lot of new songs.

One of the most important aspects is undoubtedly the economic one. Both Apple Music and Spotify have a wide variety of plans and prices that adapt to the needs of all users. A summary of these prices has been made in the following table.

It can be seen that there is clearly no difference between the two services at the price level and that both have family and student subscriptions. It is true that in the case of Spotify they are much more serious with respect to those who take up the family plan since they must reside at the same address. In this aspect Apple is more flexible since the family that is formed within the ecosystem itself is taken into account.

If you are new to any of these services, you should be aware that Apple launches different trial period plans. Currently you can get up to 3 months of subscription to a single account for a payment of € 0.99. We will not see this on Spotify except for a few days of free trial of the Premium.

Where Spotify really has an advantage is in the free program . In this, users can listen to all the music they want without paying a single euro. All they have to give in return is listen to a series of announcements. That is why this service has a greater number of users than Apple Music that does not use this free program for free playback.

In both services when we pay the fee we also acquire the right to download all the music we want on our mobile to be able to play it when we do not have an internet connection. This can be tremendously useful when we are going to take a long plane trip.

Both Apple Music and Spotify can download a complete album by an author or a personalized list in a really simple way. It will only occupy space in the internal unit of our mobile but it will always be accessible.

If you are not within the Apple ecosystem and want to use Spotify on a multitude of devices such as your PS4 or Xbox , Apple Music is definitely not intended for you. It is true that the service has improved a lot in recent years but there is still a long way to go before Spotify in terms of accessibility in the web version.

Spotify’s poor integration with Siri, forces a person who is within the Apple ecosystem to go to Apple Music. In the future, it may not be necessary to give very specific instructions to Siri to control our music on mobile or HomePod.

It is for all this that if you are in the Apple ecosystem, the most recommended is to go for Apple Music and if not, for Spotify.