Video games are not exactly cheap. In fact, most console manufacturers sell their devices at a loss to recover the money invested through game purchases in the respective stores. However, on PC, the price of the games is practically the same, at least at launch, although the developers and the stores that distribute them have to recover part of the investment, since nobody subsidizes the price of the components of the games. computers. The best way to save a few euros is to buy redeemable game codes on the different platforms available on the market.

Game developers offer new releases, usually on Steam and the Epic Games Store, since the rest of the platforms (Origin, Ubisoft, Battle.Net and others) are only platforms that give exclusive access to their titles, titles that, in most cases, are only accessible from the corresponding launcher, although over time they are also available on both Steam and the Epic Games Store. Where to buy cheaper PC games

If we take into account that both the Epic Games Store and Steam are the most used platforms and where the latest releases are always found, they are the fastest way to access titles.

However, the price of the games available on both platforms is exactly the same at the time of their release (over time, each platform does release different discounts).

The only option to buy both games that have just arrived on the market and those that have been on the market for a while is to use platforms such as Instant Gaming, Eneba, CDkeys, Gamivo, SCDkey and Kinguin . Through these platforms, you can purchase game codes to redeem on Steam, Epic Games, Store, Origin, Ubisoft Connect, GOG, and more. In addition, we can also find codes for PlayStation, Xbox and Nintendo Switch.

The first thing we must do before buying a download code for a game is to select from which platform we are going to play. If the platform you use the most is Steam, if the game is available on that platform, the ideal is to buy a download code from this platform. But, if the game is not available on Steam, but it is on other platforms like the Epic Games Store or GOG, you will have to select the platform that you like the most, because, in the end, it always comes down to taste.

A Steam game download code can never be used on the Epic Games Store or any other platform . The same thing happens if you buy a Ubisoft Connect download code. Each platform has its own code system, exclusive codes for each of them, so if you make a mistake, you will have to buy it again or adapt to the platform, since these codes cannot be returned.

Taking into account that Steam is the largest platform for PC games in digital format, we are going to start with it. To redeem game download codes on Steam , first of all, we need to open the application.

Next, we go to the Products menu and select the option Redeem a Steam Skin code. 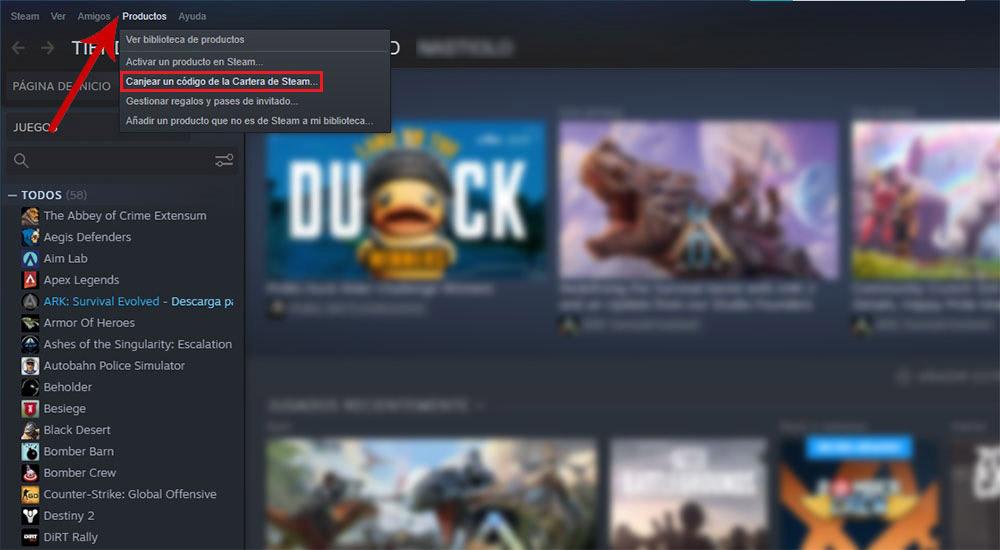 This will open a new Steam window titled Redeem a Gift Card or Code. We must enter the code that we received by email after making the purchase in the Steam Wallet Code field and finally click on Continue.

From this point on, we can access our game library and start downloading the game to our computer.

Use codes from the Epic Games Store

The second video game platform in digital format is the Epic Games Store. Although it is a video game studio whose best-known title is Fortnite, in your store we can find practically the same games that are also released on Steam.

If we want to redeem a code in the Epic Games Store, we can do it through the following link to the Epic website where we must log in with our account data, or directly from the application by clicking on the initial of our account name located in the corner top right of the app and tap Redeem code . 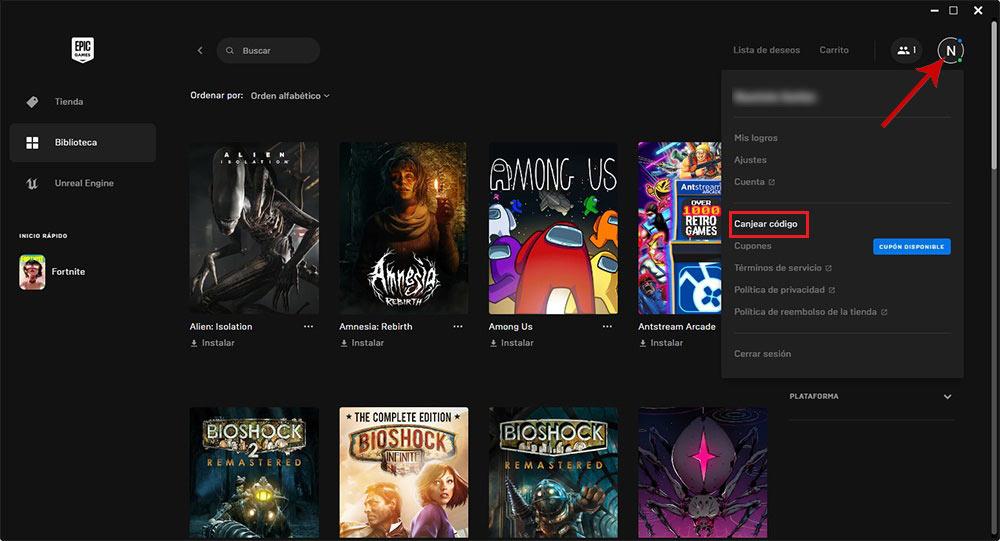 Next, we write the code or paste it in the text box where 4 blocks of 4-digit codes are shown, represented by zeros and finally, we click on Redeem so that the title is added to our library. 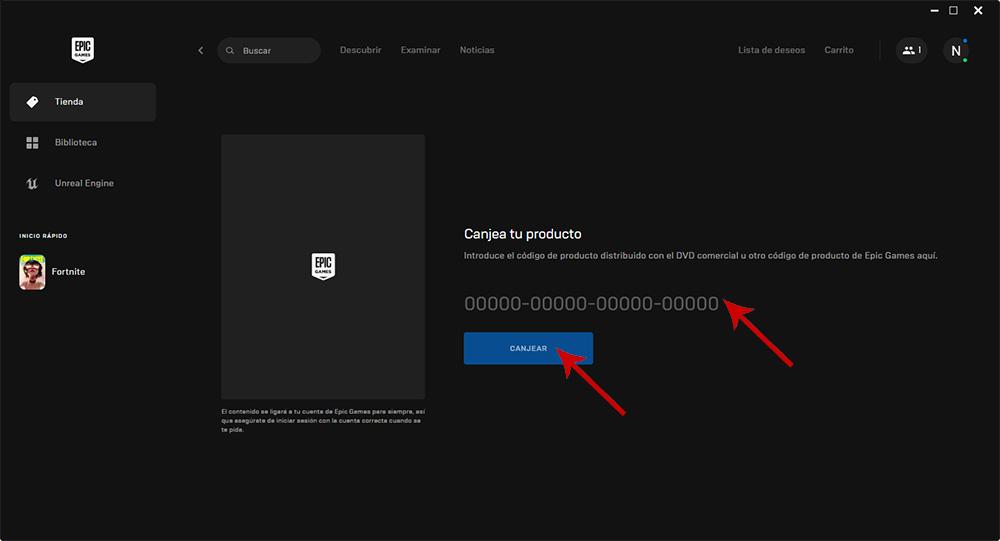 GOG is the third most used video game platform in digital format, behind Steam and the Epic Games Store. By following the steps detailed below, you will be able to redeem GOG codes from the app.

The option to redeem codes in the GOG app is available through the gear wheel available at the top left of the app. When clicking on it, we click on Add games and friends and, in the next drop-down menu, click on the Redeem GOG code button.

Next, a new window will be displayed in the center of the application inviting us to enter the code that we want to redeem in the text box provided for this purpose. Finally, click on the Continue button. 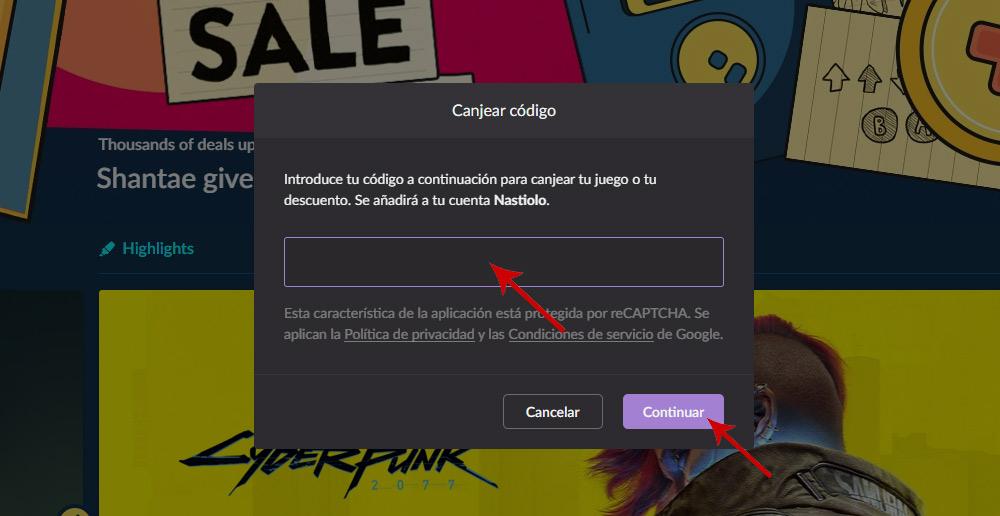 Seconds later, the title will be available in the Games – Games purchased section from where we can download it to our computer.

The Ubisoft video game platform, formerly known as UPlay, allows us to access titles such as the Assassin’s Creed and Far Cry saga, Rainbox Six, The Division, Watch Dogs, among others, although many of these titles are also available on the Epic Games Store and on Steam.

If you want to redeem a code in Ubisoft Connect, the first thing we must do is open the application and click on the three horizontal lines that are in the upper left part of the application, selecting the option Activate a code. 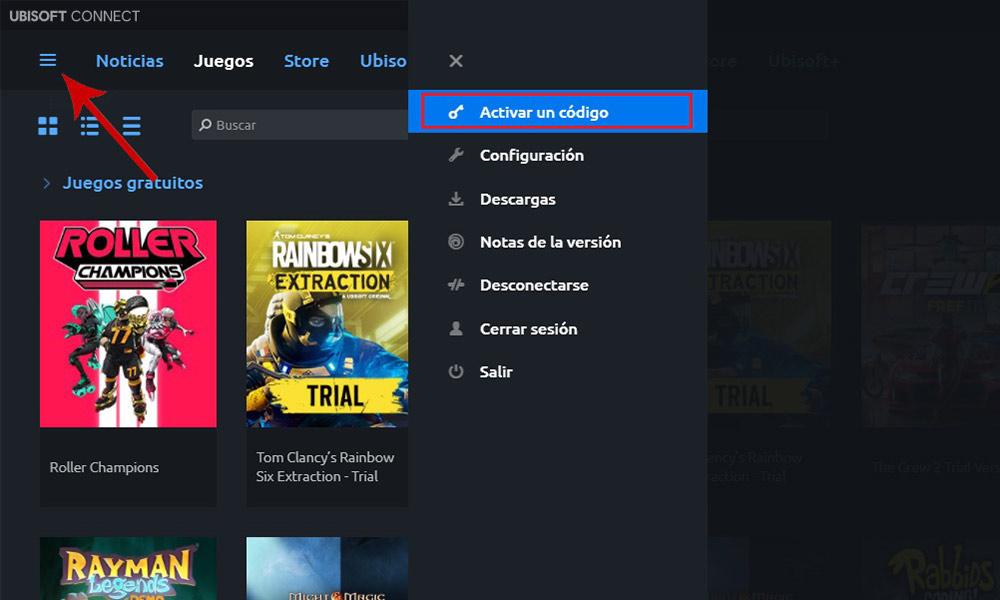 Now, we must write or paste the game code that we want to associate with our account and click on the Activate button. This button will only be shown in blue when you have verified that it is made up of a code of 4 or 5 blocks of letters, each one made up of 4 letters. 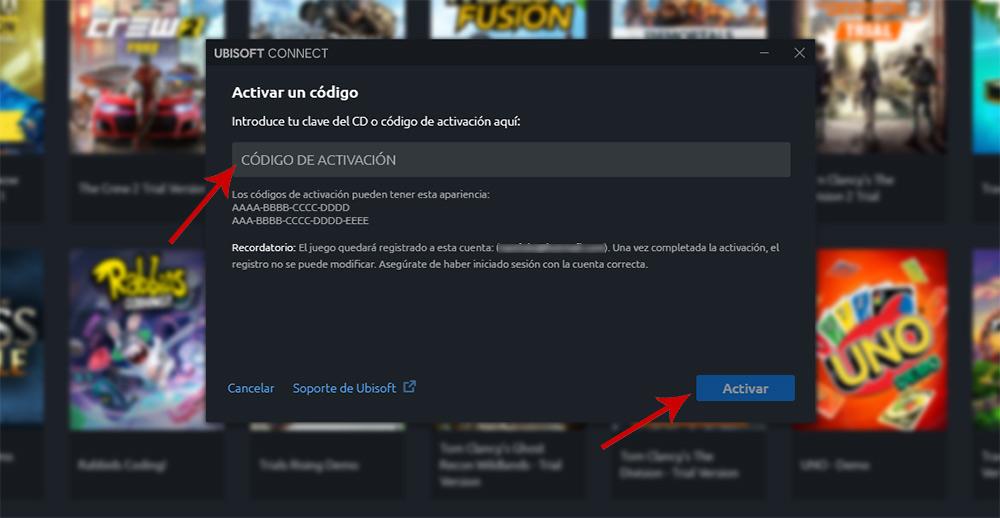 Once the code has been successfully redeemed, click on the Games menu located at the top of the application to install it on our computer.

Behind the Origin video game platform is the Electronics Arts studio, creator of titles such as the FIFA, Battlefield, The Sims, Plants vs. Zombies among others in addition to Apex Legends and Titan Fall. Some of these titles are available on platforms like Steam.

If you want to use an Origin code, you must open the app. In the top menu of the application, click on Origin and, from the options menu that appears, click on Redeem product code again.

In the pop-up window that appears, we must enter the code of the game that we want to associate with our game library. Once redeemed, the title is available in the My game library section from where we can download it to our computer. 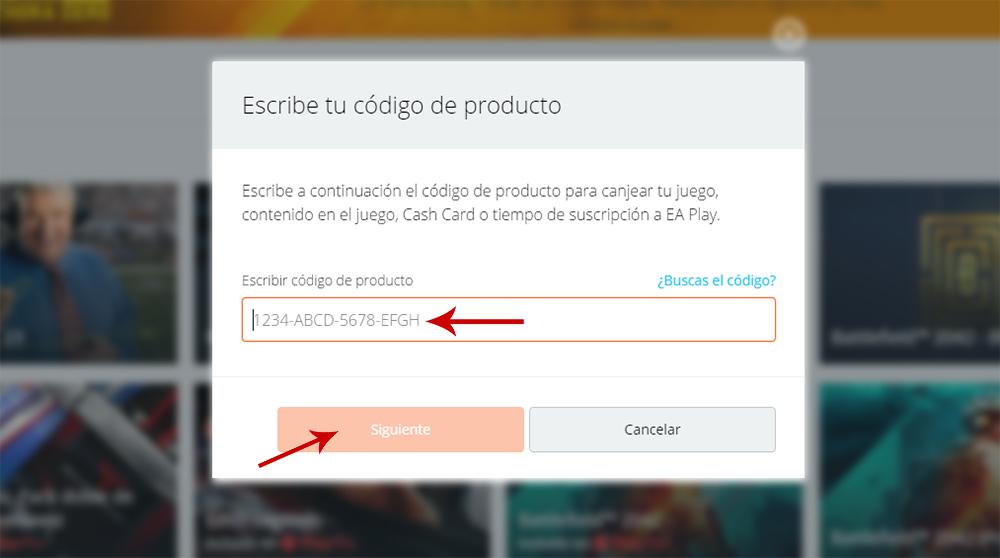 Download codes are also available on the Battle.Net app which gives access to both Activision and Blizzard games. To use a download code, first of all, we must click on the icon that represents our user, located in the upper right corner of the application. In the drop-down menu that appears, we select the Redeem a code option.

Next, a new window will be displayed where we must enter the game code in the Enter code text box and finally click on Redeem code so that the title is added to the library of games that we have available in our Battle.Net account.

The Amazon Games application is nothing more than a launcher for each and every one of the games that it gives away to Prime users every month through Twitch. We cannot buy any game through Amazon Games, we only have access to those that we already have associated with our account.