Of greater or lesser complexity, almost everyone now has a photo editor installed on their computer. Although Adobe Photoshop is the most popular, we don’t need to go for a solution of that level either. Serve as a clear example of all this GIMP, a very interesting alternative solution.

It is not for nothing that these two programs are considered the most popular and used all over the world when it comes to editing our images. However, there is a clear difference between the two. While the proposal of the giant Adobe is a paid program, with GIMP we are faced with a completely free open source project. It is true that for some time now, this program is considered one of Photoshop’s main competitors. However, many consider that, in order to continue on this path, its top managers will speed up some movements. With this, what we really mean is that for some time the usual users of this software solution have been waiting for the arrival of GIMP 3.0 . It’s been too many months now that this new version has been talked about, which initially would revolutionize the future of the editor. To date, some test versions have been seen, although it seems that its developers have not made up their minds about its launch. At the moment, the previous versions that are currently on the market continue to be improved. We refer specifically to version 2.1 and later.

But with everything and with it, as we told you, many have been waiting for the arrival of version 3.0 for a long time. 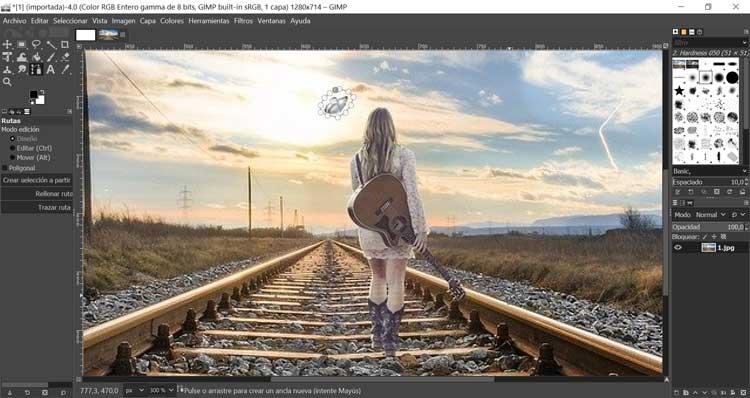 GIMP 3.0 should arrive throughout the year 2022

Largely due to the preview builds we discussed earlier, the next big update to the open source photo editor should arrive later this year. That is what the vast majority expect or want, although there is no official confirmation yet. It is speculated that the latest released versions of the images program did not have too many new features for a specific reason. And it is that most of the GIMP developers, at the moment are focused on the new and future version 3.0 .

In fact, the new big update is expected to bring the app much closer to its previously mentioned competitor, Adobe’s Photoshop . At the same time, many regular users of this type of work consider that those responsible for the program should launch the new version as soon as possible. This is due to the fact that little by little other increasingly interesting alternatives are appearing that could overshadow this project.

We are talking about other very interesting and attractive programs for the user, in addition to being free, such as Krita . It is true that its editing capabilities are less, but users are increasingly betting more on creativity and their own design, something that this specific proposal offers. Be that as it may, if GIMP wants to follow an upward path in terms of market penetration, use and functionality, it should make the new version 3.0 available to all its users as soon as possible. Hopefully it will happen throughout this year 2022 , a launch that we will undoubtedly tell you about in detail.