Depending on the operating system that we use and the associated file system, we can find ourselves with an unpleasant surprise when creating or working with large files, especially when it comes to video files, whose size often exceeds 4 GB. The File Allocation Table (FAT) was initially created in 1980 for the Intel 8086 processor. As the years have passed, and the size needs have increased, the file allocation table has been forced to evolve to be able to work with larger files. 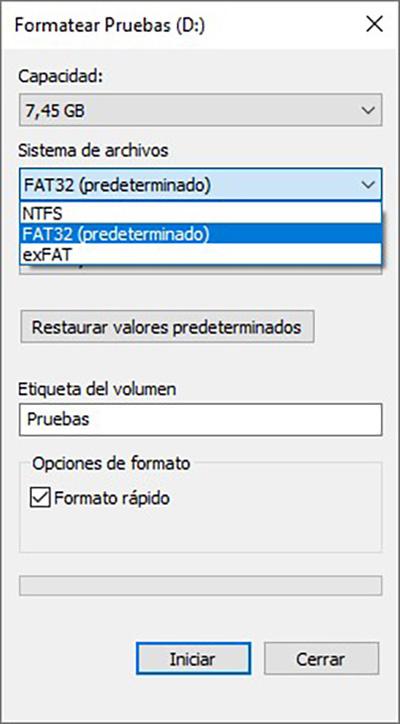 Currently, the number of file systems in Windows has been reduced to three: FAT32, exFAT and NTFS. Each one has a different purpose depending on the type of unit we want to use as long as we want to get the most out of the storage it offers us.

The FAT32 file system officially hit the market with the release of the second major update to Windows 95. This file system uses 32-bit cluster addresses (although only 28 of them are functional).

This file system offers us a series of limitations that reduce its use to older computers and external storage units, since it only allows us to create partitions of a maximum of 2 TB, a limitation similar to the one we have traditionally found with versions of 32 and 64 bits of Windows, where depending on the version, the computer was not able to take advantage of all the RAM memory of the device.

As for the number of folders that can be created on a drive with this file format, there is no limitation. The limitation is found in the maximum number of files that can be managed on the hard drive, a number that cannot exceed 268,173,300.

The folders are nothing more than simple file cabinets where the information that is stored is classified, it is, we could say, the shelf where all the files (books) of a library are stored and classified.

The evolution of FAT32 is exFAT. This file system is, we could say, the draft of what later became NTFS. The exFAT file system was designed for use on portable storage drives and is still the most widely used and recommended format today.

However, we should not use it on storage drives that are managed by the Windows operating system, as it is not optimized in the signature way that the NTFS file system is.

Regarding the maximum size of the files that we can store in exFAT units, we have to talk about a maximum of 16 Exabytes , the same limit that we find in NTFS, which we will talk about in the next section.

NTFS to get the most out of it

The NTFS file system is the one used today on all computer equipment, regardless of the size of its storage unit. In this way, we can work with any type of file exceeding the maximum limit of 4 GB that FAT32 offers us.

The maximum file size that storage drives with the NTFS file system can store and manage is 16 TB .

Regarding the size of the storage unit, with the NTFS format we are also going to find a substantial difference compared to FAT32, since it is capable of managing storage units of up to 16 EB as long as we use a version of Windows of 64 bits, otherwise we will find ourselves with the same limitation of FAT32.

To avoid these kinds of issues, with the release of Windows 11, Microsoft stopped releasing a 32-bit version of its operating system. Windows 10 was the last version of Windows to hit the market in both 32-bit and 64-bit versions.

The ext2 file system came out in 1993 when GBs were a thing of the future, just like TBs. However, this file system offered support for files of up to 2 TB , allowing a maximum of 10 18 files to be stored, an amount much higher than what we could find in MS-DOS and later in iOS.

The evolution of ext2 was ext3 (1999), a new file format that offered greater speed and scalability. In addition, it allowed updating from the ext2 file system without losing the stored data, since it was not necessary to format the drive.

If we talk about directories, with ext3, the maximum number of directories that can be created with this file system is 32,000.

In 2008 the ext4 file system was introduced, which is currently used by most current Linux distributions. As with the introduction of ext3, you could change the file system to ext4 without having to format the drive and lose all your data.

The maximum number of directories that we can create on a unit with the ext4 file system goes from 32,000 for ext3 to 64,000, just double that.

And in other operating systems?

In Android, until 2020, the maximum size of a file was limited to 4 GB, a limit that Google was responsible for expanding up to 32 GB (using system storage) due to the needs of manufacturers when allowing the user to record videos in 4K quality, videos that until now were divided into blocks of 4GB files forcing the user to join them with a video editing application.

If we use a memory card to store the data, depending on its FAT32 or exFAT file system, the maximum size is 4GB or 2TB respectively.

Apple has always been characterized by following its own path. If we talk about file systems, it was not going to be less. In 2019, it released a new file system called APFS which is available on iOS, iPadOS, and macOS.

This file system allows you to work with files with a maximum of 2 EB , allows you to create partitions of up to 7.5 EB and manage up to 4,000 million files per partition.

When it comes to sharing large files, the easiest solution is to use WeTransfer, the most popular platform for sending large files and which, moreover, does not require registration to use it.

The free version allows you to send files up to 2 GB while the paid version extends that limit up to 20 GB.

If we take into account that nowadays we all have some email platform that offers us storage in the cloud, this is undoubtedly the best and easiest option to share large files, since there is no maximum limit beyond of which we have contracted.

Once we have uploaded the file that we want to share to the storage platform that we use, we just have to click with the right mouse button and select Share or Copy link to send it to the person we want to send it to.

Email is not an option

Most email platforms limit the maximum size of files we can send to 20 MB. If we want to send a video by images in its original resolution, using an email account is not an option.

The Telegram multi-platform messaging platform is an interesting option when it comes to sharing files with a maximum limit of 2 GB . The problem is that both the upload and the subsequent download are a bit slow, so you have to be patient.

Creating an FTP server for both Windows and Linux is an option to keep in mind because what you need is immediate access and downloading or sharing of large files.

FTP servers allow you to create user lists to limit access to all or part of the available content.

If it is about sharing video files recorded with your smartphone, projects that occupy several GB and none of the options that we have shown above, satisfy your needs, the last free option that we have at our disposal is to use P2P networks.

Curiosities about the size of the files

Below, you will find the answer to questions that you have probably asked yourself at some time and that are related to the size of Windows files.

Maximum size of a ZIP

The maximum size a zip file can be depends on the file system that the computer you are creating from is using.

If the device uses FAT32, although the file to be compressed takes up more space, the application will divide the created files into 4GB blocks. But, if the computer is using NTFS, the maximum file size is 16 EB, the same size that this file format is capable of handling.

How big is a text document?

The maximum size of a text file, depending on whether it is plain text (txt) or rich text (Word), varies considerably.

A document with 1000 words in Word format is about 18 KB. The same document, in flat format without formatting, occupies 4 KB, 4 times less .

Windows, like Linux and macOS, is made up of a large number of files that work together so that everything works much more smoothly and quickly.

If you count the update files, temporary files and others, the maximum size of the files found in Windows is very rarely more than 15 MB .

Which file system to choose?

Each file system is focused on different uses, although obviously we can use the one we like the most, although it is not recommended. In fact, Windows limits the available format options depending on the storage capacity of the drive.

The FAT32 system is the recommended file system to use in pendrive-type storage units up to 16 GB of storage.

Storage units with such a small capacity are focused on being used with old computers that offer us support for units with other formats, so it is the recommended option for computers with old operating systems that are not compatible with NTFS.

Storage drives up to 128 GB

If we talk about storage units of up to 128 GB, the best option, due to its compatibility with the most used operating systems, is to use exFAT, as long as our intention is to connect it to different computers .

It is not recommended to use FAT32 due to the limitations it offers us in terms of maximum file size (4 GB), although we can use it sporadically if we want to connect the external storage unit to an old computer.

Although the advantages offered by the exFAT format are practically the same as NTFS, Windows recommends the latter format to use as a base to install Windows on any computer in order to have access to all the storage capacity it offers along with the possibility of being able to work with files larger than 4 GB.