Of course, one of the best features of the PC is the ability to play as we want. Do we like the keyboard and mouse better? Perfect. And what if we like to play with a controller? It is also possible, and with the command that we want. And some games with one peripheral, and others with another? No problem. And, although we can use any control on PC, both by cable and wirelessly, the control that we could consider as “official” in case of being Windows users is, without a doubt, the Xbox one.

Most PC games that are designed to be used with a controller have the Xbox controller mapping. In addition, Windows is the command that best recognizes, uses it as the basis for generic controls and is the one that has the best support within the company’s ecosystem. And if we are going to play Microsoft games, such as those included in the Game Pass, much better. One of the advantages of this remote control is that it requires little configuration or maintenance . Simply connect it to your computer and as soon as Windows recognizes it, you are ready to play. The controls are the same as if we were playing on a console and, being the command par excellence for PC, in all games the symbols of this command will appear in the form of help on the screen. However, although it is a very simple command, there are always some basic maintenance tasks that we must carry out. For example, update your firmware.

Why update the Xbox controller firmware

As is usual in all types of software, at any time an error can be discovered in the software that can make our remote control not work correctly. It is usually rare to find vulnerabilities in a peripheral such as a controller that can trigger security problems. However, it is easy to find small errors that may affect the correct operation of the remote.

The most common problems are usually related to connectivity (causing it, for example, to be lost or weak), problems in the reliability of the connection , control blockages and even excessive consumption of the batteries . There may also be problems with some of the advanced functions of the controller, such as streaming audio through the controller.

The Xbox controller update process is a quick and easy process , and it is not usually a hassle. In addition, it does not limit or invalidate the guarantee, since it is an official process 100% controlled by a Microsoft app. However, to avoid problems, we do have to put into practice some small safety recommendations.

For example, the firmware update process is quite sensitive for peripherals. Therefore, we must ensure that the process is not interrupted at any time. If we do, we can keep a paperweight instead of a controller. Nor should we disconnect the USB cable in the process.

In addition, normally, at the end of the update, an automatic calibration is usually performed. Therefore, it is recommended not to touch the knob, or any button or lever until the process is completely finished. Once it is finished, we can disconnect the remote from the PC cable and continue using it as normal.

How to update the Xbox controller from Windows 10

When we connect the controller to an Xbox, it is in charge of updating it automatically without us having to do anything. However, in the case of a PC, things are different. To do this, what we are going to need is to use a Microsoft program called Xbox Accessories . What this program allows us to do is:

In order to update the firmware of the remote, the first thing we must do is connect it by cable to the computer. We cannot perform this task wirelessly, for security reasons. Once the controller is connected to the PC, we open the Xbox Accessories app, and we can see the connected controller. Below the remote we will see a button with three dots , which will allow us to access the advanced options of the remote. 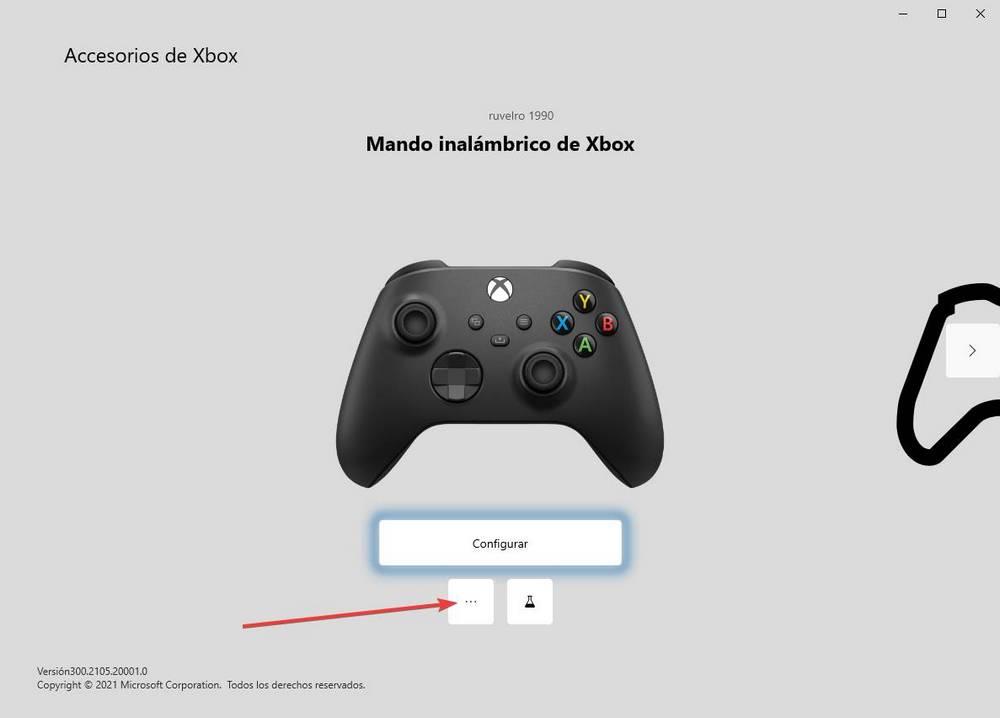 We click on this button, and we can see a window like the following one. In it we can see the version of the firmware that we have installed on the remote, and a button from which we can download and install the new version if it exists. 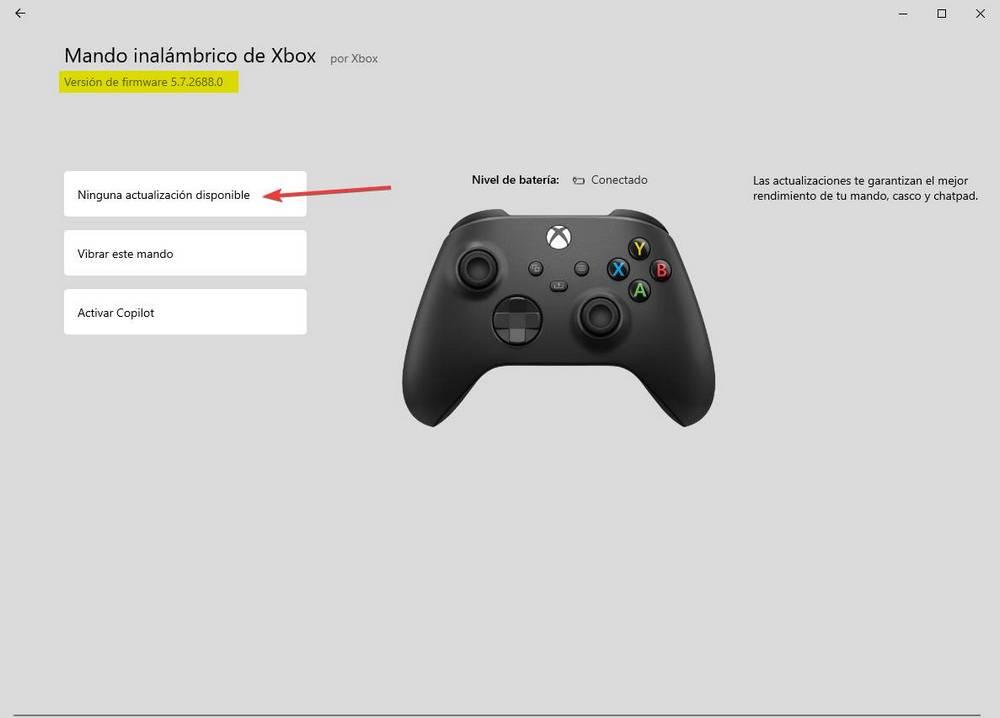 The process of installing the new firmware is very simple. We will be able to see an assistant who, in the first step, recommends us to make sure that the remote is well attached. 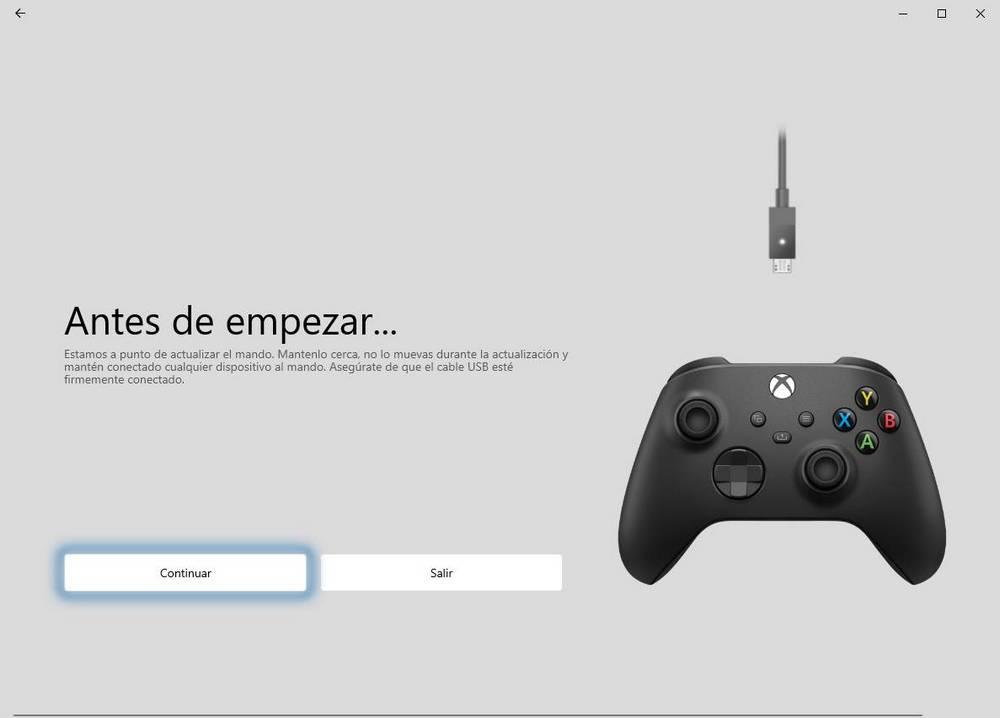 We click on the ” Update ” button and the upgrade process will automatically begin. This process will take a few seconds (depending on the size of the firmware to be installed) and, while it is being done, we cannot use the controller. Also, we shouldn’t touch it either. It is best to have it on a stable surface. 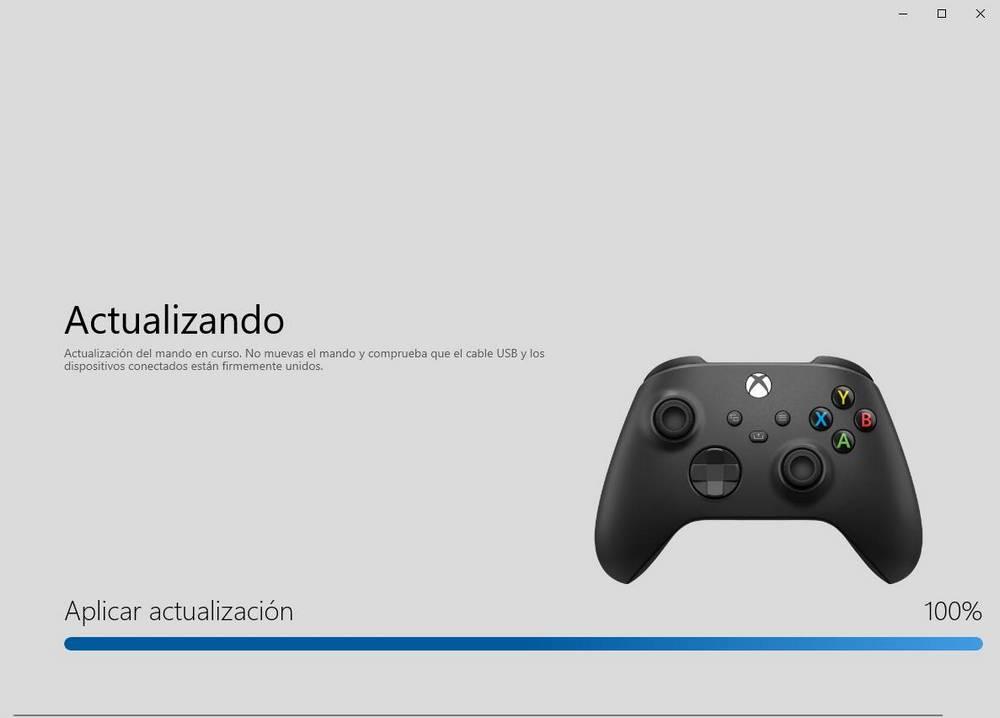 We wait for the process to reach the end, and that’s it. Windows takes care of applying the new firmware to the controller automatically, and restarting it. Being connected by cable, we will not have to turn it on again for the PC to recognize it again. Once it is finished, we will have our updated command.

Now we just have to disconnect it from the computer and that’s it. We can now reconnect it via Bluetooth, wirelessly with the official receiver or, if we prefer, via cable.

What if there are no updates? 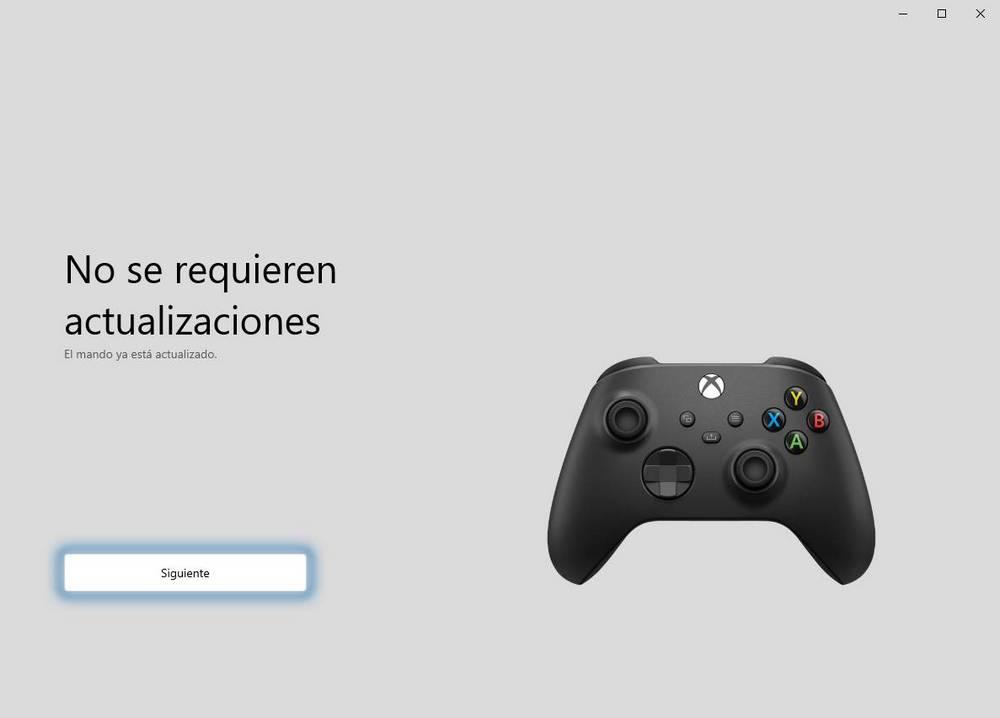 We simply disconnect the remote from the PC and we can continue using it normally. In the future we must return to the app to search for new versions, download them and install them on the remote so that it works in the best possible way. Of course, we should not obsess over controller firmware updates, since they are not released as often, and it can take months between one and the other.