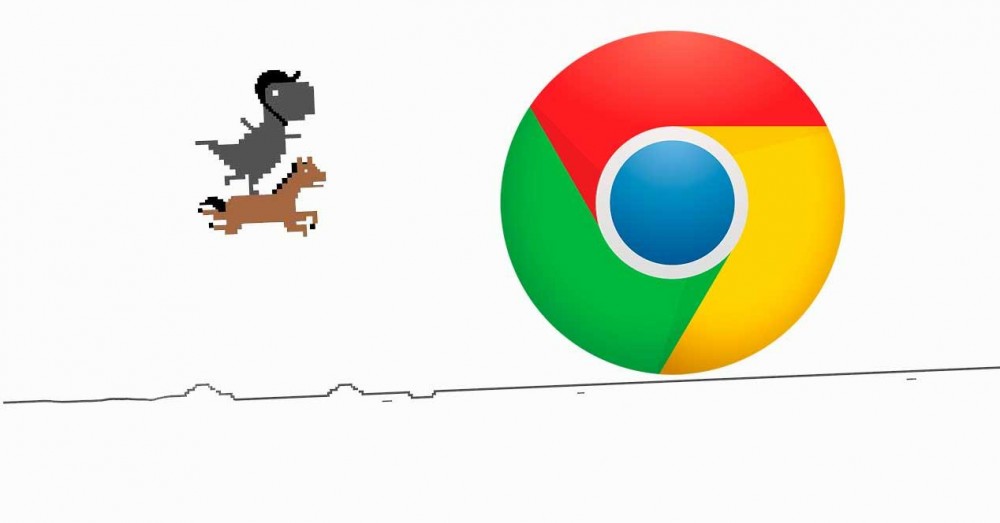 It’s been a long time since Google revolutionized the time without Internet thanks to a hidden minigame in its Chrome browser. This minigame puts us in the shoes of a dinosaur , specifically a T-Rex , with which we have to go around all kinds of obstacles. The game has no end, and we can play accumulating points until the Internet comes back, or until they kill us. This minigame has been around for a long time, without changing the least. However, this time Google wanted to give it a facelift, at least temporarily. And what better way to do it than by taking the dinosaur to the Olympics.

The normal thing is that to be able to play this minigame we do not have Internet. However, there is a trick that allows us to play the Chrome dino game online. To do this, all you have to do is type the following in the address bar of our browser:

When you press the Space bar on the keyboard, the dino will start to run and jump. But, if we have installed the new Chrome 92 , launched this week, we will have a surprise.

Play the Chrome minigame at the Olympics

In general, this minigame consists of jumping over cactus and dodging other objects that are normally related to the desert. However, this time Google has added other mini-game modalities, including gymnastics, surfing, athletics, swimming and horse riding .

In the end, all without equals and have a practically identical operation, that is, you have to press the space key to jump, or dive, depending on the obstacles and the minigame we are playing. To start with these games, what we must do is play normally. However, there will come a time when, instead of a cactus, we will find the Olympic torch. Well, instead of jumping it, we will collide with it.

Each time we do it, it will load a different minigame from all those available. And, when we lose in that game, we will have the possibility to start over with it. If we want to change the game we will have to re-enter the minigame and take the torch again.

Even the dinosaur has special costumes depending on the game we are playing! Of course, a most curious detail from Google. Unfortunately, when the Olympics are over, this Easter Egg will pass away.

Surf is way ahead of Dino

Microsoft did not want to be left behind, and decided to add a different minigame to its Edge browser. In this case, the game the Windows manager bet on was a Surf minigame. And the truth is that, despite being a simple game, it is far ahead, in all aspects, of the Google minigame.

Surf is in color, it has several game modes, different personals to play, more obstacles and the possibility of comparing our scores with those of other people. Very simple details that add great quality to the program.

Hopefully Google intends to improve its minigame as a result of these changes for the Olympic Games, because the truth is that it is beginning to become obsolete and is no longer as new as it was in its day.