Virtual Private Networks, or also known as VPNs, are widely used by users to protect their security and privacy on the Internet. They are also widely used to evade regional blocks of streaming services, to avoid censorship in different countries, and even to download from P2P networks without legal problems in certain countries. Today in this article we are going to explain in detail the types of VPNs that exist, how they work and how they differ.

Types of VPN and how they work There are different types of VPN that we can use, and it is that we have at our disposal simple, double VPNs and also those known as Multihop. Depending on our needs for security, privacy, speed and latency, we will have to choose between one type or another. It is very important that you know that the greater security, the lower speed we will have in the connection, so it will be difficult to use P2P programs or stream video in 4K.

If you are using a VPN service to connect to the Internet for greater security and privacy, there is a good chance that you are using a simple VPN. This type of VPN is the most common of VPN services, in addition, this type of VPN is the one we use if we set up a server at home and connect to it to access the Internet and the local home network. This type is used by all the usual services like NordVPN, Surfshark, PureVPN and many others.

The communication between the clients and the server is fully encrypted and authenticated, so we will have confidentiality, authenticity of all the data and integrity of the same. Protocols such as OpenVPN or IPsec are generally used, however, in recent years the protocol par excellence is WireGuard, much faster and more efficient than other protocols, so it is highly recommended to always use WireGuard above the rest, because it will provide us with faster download and upload speed. When the PC, smartphone or any other device establishes a connection with the VPN server, all the traffic is encrypted and authenticated, they will not be able to carry out Man in the middle attacks to see all the network traffic, since everything is encrypted, they will be able to capture it but they won’t be able to see anything readable. Once the network traffic is safely on the server, it then diverts all traffic to the Internet through this server. In the case of using HTTPS, then the traffic between the server and the Internet will also be encrypted and authenticated. We can say that browsing with simple VPNs is safe, since we are establishing a TLS tunnel between the client and the server, to later go out to the Internet. Of course, depending on the server where we connect, we can avoid regional blocks, censorship in our country and be anonymous.

Simple VPNs are a secure and private method of accessing the Internet, for the vast majority of users the protection they provide is more than enough. However, if you want additional anonymity at the expense of connection performance (lower download and upload speeds and higher connection latency), then you should use a Double or Multihop VPN.

While in a simple VPN the client connects to the server, and the server is responsible for sending it to the Internet, in double VPNs an additional server is inserted between the first server and the Internet.

In double VPNs, what the clients do is connect to a VPN server, this server will connect through another secure VPN connection to a second server of the service, and once the client’s network traffic is in this second server, then it will go out to the Internet directly, using the public IP address of this second server, not the first. In this way, we have a double jump in the connection, with its corresponding double data encryption and data authenticity, that is, they are in a “cascade”, one after the other.

The communication between the clients and the server, and the first server and the second, is fully encrypted and authenticated, making use of different protocols such as IPsec, OpenVPN or WireGuard. In this way, before going to the Internet we will have two servers in the middle to increase the security and privacy of the connection. When we make use of this type of virtual private networks, we must take into account that the Internet access will be given to us by the last server in the cascade, so we will access the Internet using the public IP address of the second server, not that of the first one. it is used to interconnect the servers with each other.

With a double VPN, a cybercriminal will have a much more difficult time reading our browsing data. If they try to access the first server, all the data will be encrypted with the different protocols, and if they try to access the second server and hack it, all the traffic will also be encrypted by the first one, so they can only go back to the first encryption layer of data, making it nearly impossible for network information to be compromised.

Is this type of VPN worth it? For the vast majority of Internet users, it is not worth using a double VPN or Multihop, for several important reasons that we detail below:

Taking into account that we are going to have lower speeds and higher latency, the typical uses of VPNs such as P2P downloads, online games and even streaming video in 4K will become more complicated, and we will have a worse user experience. We only recommend using this type if you are only going to navigate.

For some Internet users, who prioritize security and privacy above all else, it is worth using this type of VPN that adds one or more layers of data encryption, ideal for avoiding government surveillance , be totally anonymous when browsing the Internet, etc.

The term Multihop means that a client to access the Internet will go through two or more intermediate VPN servers, in this way, we increase security and privacy when browsing. A double VPN is also a Multihop, some payment services instead of using the term “double” use the term “multihop”, however, there are some services that allow us up to 3 and 4 hops to go to the Internet, in this way, all network traffic will be tripled or quadrupled, which will make it much more difficult. 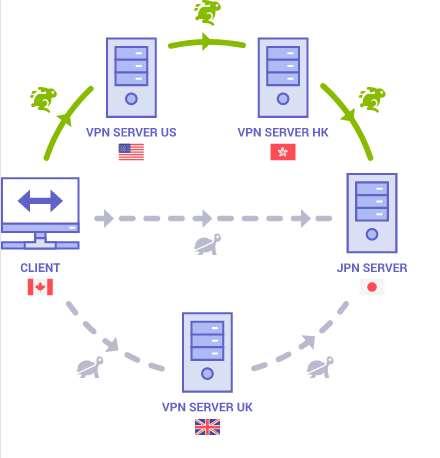 This type is the most used by people who need maximum security and privacy when browsing the Internet, of course, when using this type of Multihop we rule out P2P downloads, video streaming and even online games, because the The speed will be very low and the latency very high, since all the traffic will have to go through three or more intermediate servers. Of course, we will go out to the Internet with the IP address of the last server in the “cascade” as we have explained before.

The Multihop type is usually a premium option of the main services, they are much more expensive than the simple or double ones, because it involves many more servers simultaneously, in addition, it is possible that this multihop is carried out through several countries to improve the anonymity. Generally, when a service allows Multihop, it provides us with information about the country where each server of the different hops is located, for example, if we want to go to the Internet through Germany, the last hop must be on a server in Germany.

If privacy and security is the most important thing for you, it is clear that Multihop is what you should use, but it has its weak points: very low speed and very high latency.

Choosing one type of VPN or another depends on our needs, if your priority over everything else is security, privacy and anonymity when browsing the Internet, then the Multihop type is the one you should use, although having the best Security also has its consequences in terms of speed and latency of the connection. In this case where anonymity is the most important thing, you should consider using the Tor network that is specifically designed for this, either through Tor or directly using the Tor Browser if you are only going to do web browsing. You can use Tor alone or in combination with VPN services, although higher security means lower connection performance.

If you want to have good security and privacy when browsing, and you want to be able to download with P2P programs without speed problems, stream video in 4K to bypass regional blocks and other uses, then the “simple” type is the best. adapts to your needs.

In case you want to have a middle ground between maximum security and good security, then the “double” type is what you need. This type will allow us to enjoy very good security and privacy, as well as a decent Internet browsing speed via the web, however, you must bear in mind that the performance will be clearly lower than the “simple” type as we have explained previously.