Adobe Flash is part of the history of the Internet, whether we like it or not. Before Internet standards supported all kinds of multimedia elements, such as videos, sounds or animations, to provide pages with these elements it was necessary to depend on Flash, or similar technologies. In a way, the webs are as we know them today thanks to them. However, times have changed, and Flash has gone from being something essential to being a complement that only endangered our PC. And so, in 2021, he passed away and disappeared. Or not?

Windows removed and blocked Flash on all computers through an update. Chrome, Edge, Firefox and all other browsers did the same so that users could no longer use this add-on and put themselves in danger. However, what about the people who still need to use Flash? The truth is, there aren’t many options left, and scammers are, of course, going to take advantage of it. It is not the first time that we see programs on different websites that promise to return the use of Flash to the computer. and all of them are looking for a way to scam us and put us in danger. The only way to use Flash in browsers is to use an outdated version of the browser (Chrome or Firefox) that will still support that version. And that poses a great danger.

If we have swf files (animations in Flash format) saved on the computer, we can still open them with specific programs for it, such as SWF File Player . This program, likewise, can pose a danger to our security, so it is best to try to avoid it, and only use it when we have no alternative.

However, hackers are well aware that the Windows Store , the Microsoft Store, is still a great platform to scam users. And, unsurprisingly, they will not pass up the opportunity. 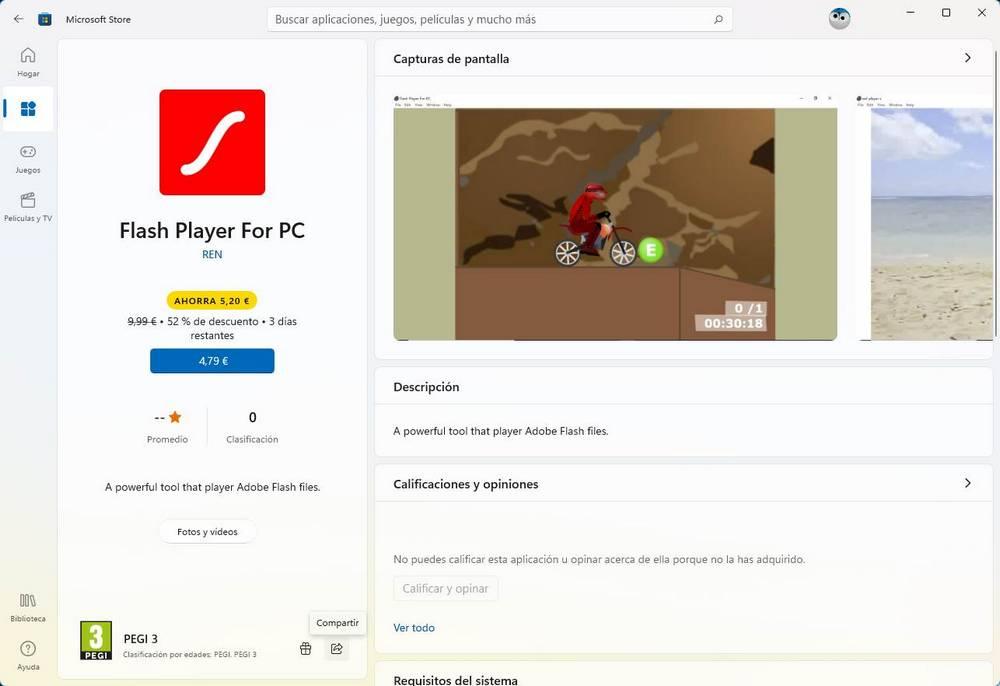 As we can see, this is one of the many fake applications that we can find in the store. As its description says, this application allows us to play Flash Player files, nothing more. And, as if that were not enough, it costs almost 5 euros. A simple search in the Microsoft store returns a large number of similar results.

In case there is any doubt, all these apps are fake . None of them have support or permission to be in the store. Most likely they don’t work, or they do it poorly. And there is probably even hidden malware in them, we don’t know.

Be that as it may, they are applications that we must avoid at all costs.

Microsoft has good intentions with its store. In addition to constantly evolving, very soon we will be able to download other types of applications on the PC, such as third-party stores, and even Android applications to run them in the new subsystem. However, this store has a very serious problem that Microsoft refuses to solve: the lack of controls . And it is that the company does not establish quality or security controls in the applications that are published in its store.

This is why, of the total number of apps that we can find, 95% of them are false, dangerous or useless , and only seek to deceive the user.

Microsoft should try to fix this problem as soon as possible. It should make very strict checks to detect rogue or malware applications, but there aren’t any. A simple search for “Chrome” or “VLC” will give us the reason.

And there is also a minimum quality requirement to be able to be in the store, and, again, it does not exist either. And the truth is that it doesn’t look like this is going to change, at least in the short term.