Millions of users around the world are waiting for the arrival of the new operating system that Microsoft is going to offer us. Specifically, we refer to the new Windows 11 that is expected to be among us officially next October, something that will affect your PowerToys.

That does not mean that the Redmond-based firm is going to completely abandon Windows 10, In fact, they assure that they will continue to update that version of the system. However, it is to be expected that little by little users will migrate towards the new version. As it could not be otherwise at this time, Microsoft is gradually updating the native tools of its software. By this, what we mean is that it is adapting the appearance of the applications that come by default for Windows 11 . By this we mean that rounded corners, Mica theme compatibility, and other interface enhancements are being added. In fact, but the firm has already updated applications such as clipping, Calculator , Mail or Calendar , among others. All this to adapt them to the new Windows 11 design language.

Microsoft will change the look of its PowerToys

At the same time and from what we have been able to know now, when Windows 11 is released, Microsoft will also update its PowerToys tools. The company plans to give it a new look that will coincide with the design of the new operating system. For those of you who do not know, the PowerToys is a collection of utilities created and maintained by Microsoft that does not stop growing and complement the integrated functions of the operating system. Likewise, Microsoft is now working on new features, tools , enhancements, and new configuration options for PowerToys. 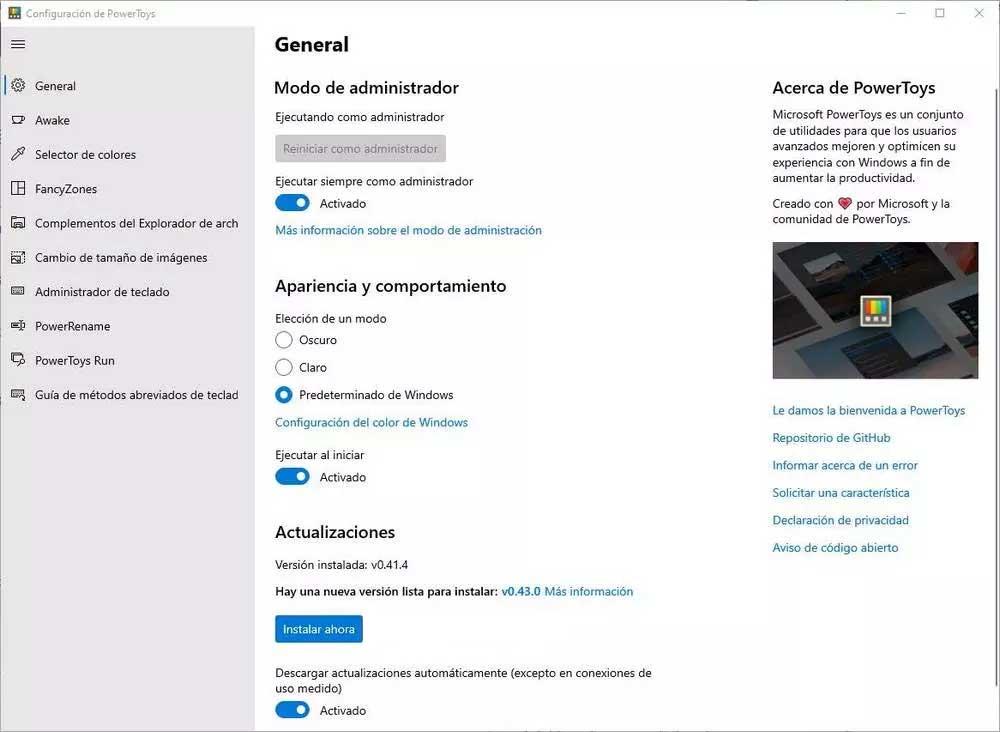 The most recent version of these already offers support for the global mute button in Windows, resizing images, and much more. But now, as part of the first major update to the PowerToys interface, the software giant plans to introduce a new settings and configuration screen. At the same time it will include rounded corners, WinUI 2.6 controls, Fluent Design enhancements, new icons, and various elements of the Windows 11 design language.

Other improvements coming to Microsoft tools

How could it be otherwise, with the arrival of the new operating system , the Redmond firm has been forced to update its PowerToys. To do this, it will adapt the appearance of these tools so that they are in accordance with Windows 11. In addition, the firm will add a new interface for their configuration and several improvements related to accessibility.

It is also planned to include improved dark mode support and a new update interface. However, and from what is said, the redesign of the PowerToys does not support the customizations of Acrylic, Mica or the title bar . This will be resolved when the tools are completely redesigned with WinUI 3. Keep in mind that we are talking about a set of open source applications with frequent updates.

Finally, we will tell you that Microsoft is also working on a new design for the classic Paint and Notepad in Windows 11.