One of the most important elements that are part of the Microsoft operating system is the taskbar, which has been with us since the classic Windows 95. Over time, this bar has been gaining in design and some have been removed. functions. For those who love customization, we are going to present different programs that will allow us to configure this element that is so characteristic of Windows to our liking.

And it is that the Windows taskbar is a fundamental pillar of the operating system, which we can load with applications to be able to have quick access or keep it clean to give the system a more minimalist design. The Start menu is also located on this bar. Whether we have Windows 10 or Windows 11, we have different options to be able to customize it through the use of third-party applications. Customize the bar in Windows 10

In the event that we use Windows 10 as the operating system, we can use the following applications to be able to customize the taskbar to our liking.

It is an application that allows us to customize the behavior of the Windows 10 taskbar. We will have the possibility of reducing the additional space between the anchored elements and icons. We can also change its default behavior, so we can specify what to do when double-clicking on some of these bar shortcuts. 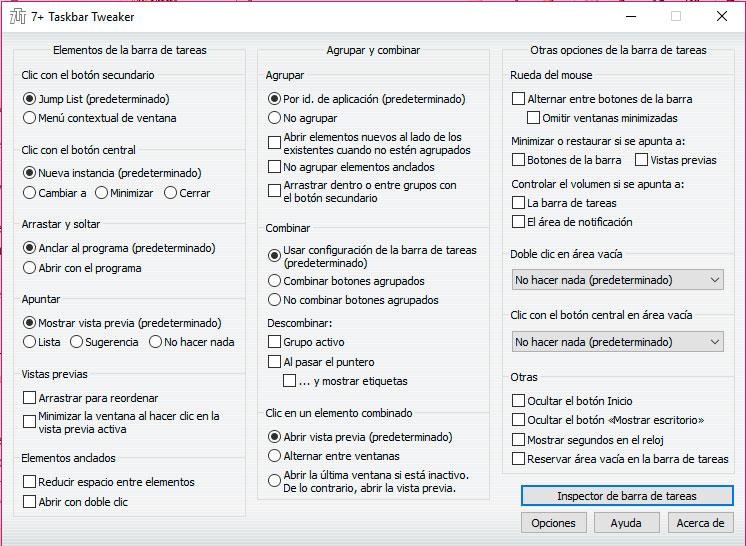 Another interesting function is that it allows us to group elements on the taskbar, or where they are going to be placed each time we open them. In the same way, it allows us to take advantage of the mouse wheel to move between the applications anchored here and thus use Windows 10 in a more fluid way. In addition, we will be able to create custom actions , for example, when clicking with the mouse in an empty area, either with the main button, or with the central one.

TaskbarCustomizer, change the appearance of the bar instantly

We are talking about an application that allows us to manipulate certain aspects of the taskbar in Windows 10. With it, we can change whether or not the Start button is visible and we can also change whether the Show desktop button is visible to take advantage of the maximum screen. It’s also possible to change the position of all pinned items on the taskbar, highlight items with color, or even make it transparent to show just the icons. 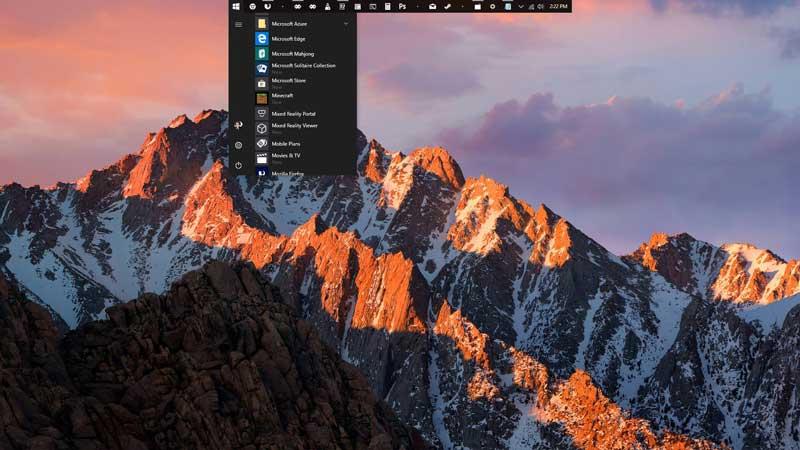 This lightweight and open source tool is easy to use, so we can change the appearance of the bar instantly. Although it must be said that we can find some errors of its own development. We can also modify its opacity to match our wallpaper, as well as reduce its width. With all this, the application gives us the freedom to customize the appearance of our taskbar so that it best suits our tastes and preferences, although some more advanced options are missing.

If we want to use TaskbarCustomizer we can download its latest version available from its GitHub repository.

It is a simple utility that has been developed to customize the Windows 10 taskbar. Through it we can make aesthetic changes or make it completely transparent. It also allows us to center the icons, customize their location on the right, as well as group tabs, giving it a look very similar to the macOS Dock. 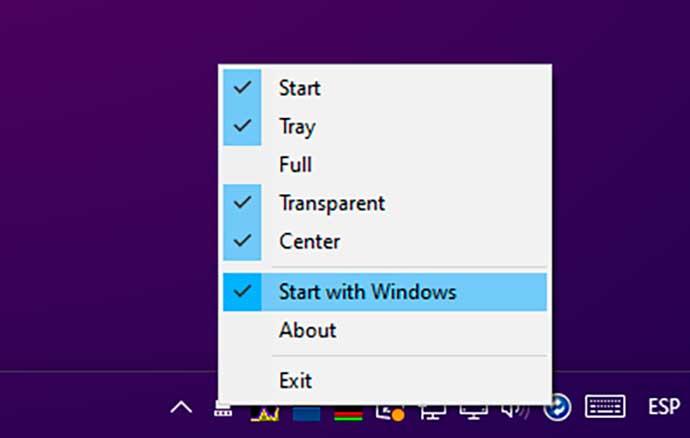 The application allows you to change the size of the icons for large monitors and is compatible with two or more monitors , so that we can adapt the bar to our workspace, allowing us to have two different bars. Its use is simple because it will only add an icon to the system tray from which you can make all the configuration settings.

TaskbarDock is a free and open source application that we can download from GitHub .

It is a small, light and easy-to-use program with which you can customize the Windows 10 taskbar to give it a more elegant touch, making it translucent and transparent. It consumes very few system resources, so it can be used by old or less powerful computers without problems. 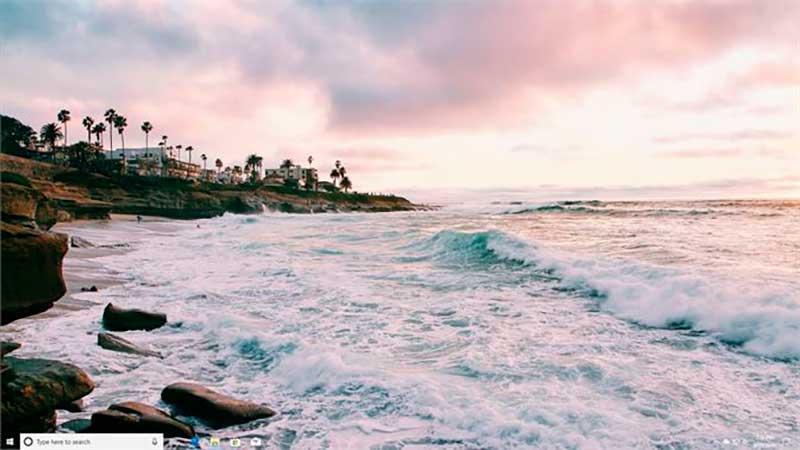 With it we will be able to customize its effect and color, as well as combine states (maximized window, open start menu, open Cortana and open timeline). We can assign each one a customizable taskbar appearance to arrive at a visually appealing and dynamically changing taskbar.

We can download the program for free from the Microsoft Store and take advantage of all its features, such as automatic background updates and configuration synchronization.

Configure the taskbar in Windows 11

Next, we are going to see different programs that will help us customize the Windows 11 taskbar to our liking and change its appearance.

TaskbarXI, change the appearance of the bar in various ways

It is an application designed to configure different styles of taskbars in Windows 11, including transparent, gradient transparent, opaque, blur, and acrylic. It is currently in its early stages although it supports taskbar styling features, supports multiple monitors and supports separate DPI scaling , more features are expected to be included in their own releases. 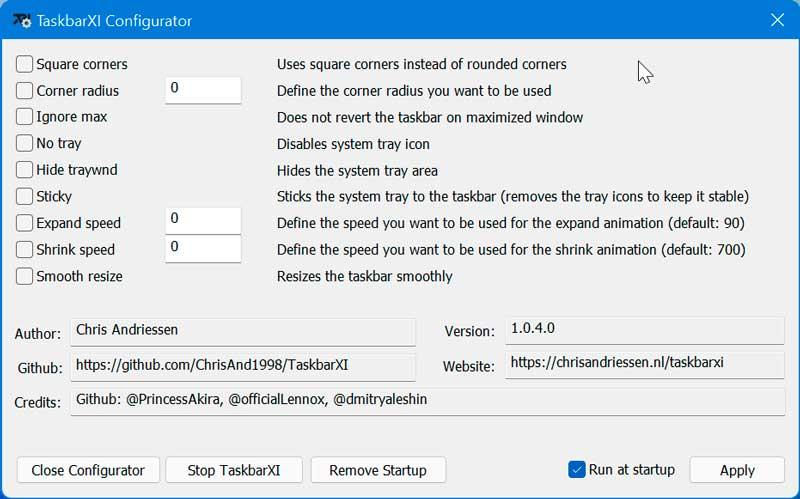 The application has a simple interface that allows us to change the configuration of the bar , allowing it to be located both centrally and to the left of the screen. We can configure square corners instead of rounded ones, hide the bar, hide the system tray icon, among other functions.

Taskbar XI is a free and open source application that we can download directly from its Github repository.

Retrobar, use the taskbar from previous versions

It is an open source application that allows us to change the appearance of the Windows 11 taskbar to give it a more classic look, making it similar to what we could find in Windows 95, 98, ME, 2000 or XP. We can choose from a wide variety of themes to choose from, as well as the possibility of creating our own themes in XAML format. It also allows fonts to be smoothed to make them look better, hide the clock, remove icons from the notification area so they don’t bother, among other functions.

Another of its most striking features is the possibility of showing the taskbar on any side of the screen, as well as showing the bar, the notification area and the clock on several monitors. In addition, it has a Windows XP-style collapsible notification area that we can also customize. The application is completely portable, so it will not be necessary to carry out any type of installation on our computer.

We can download Retrobar for free from its GitHub page.

This application focuses on modifying the purely aesthetic section of the taskbar without touching its internal operation. As soon as you run it, it sets the bar as translucent , so it almost disappears, something that many users claim as something that the operating system should include by default. It also has a color selector to change its appearance in real time. 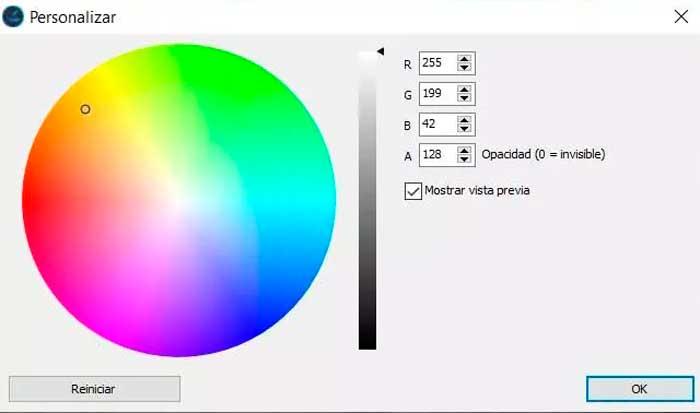 Unlike the rest of the applications that we have seen, Ashampoo Taskbar Customizer requires that we buy its license to be able to use it, which has a cost of 14.99 euros. It also allows us to try it for free by downloading its trial version. It is compatible with both Windows 11 and Windows 10.