It is possible that on occasion we need to be able to connect our computer remotely, so that we can control another PC without having to go to it. Something common if, for example, we want to access the office computer from home. For this, the best option is to choose a professional system that allows us to connect remotely using SSH protocols. For this, many users opt for a program like PuTTY, although there are also other alternatives that we must take into account.

Although the usual thing may seem to control a computer remotely through a graphical interface, the truth is that there are also tools that allow us to control it through a terminal either in Windows or Linux, which will allow us to perform tasks with greater ease and speed. For this, the most common protocol is SSH and PuTTY the most used program for it. 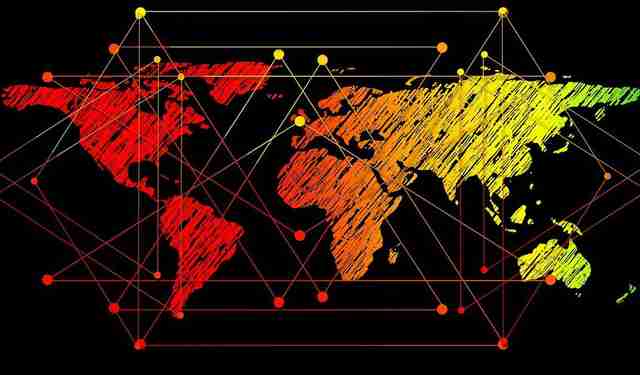 What is the SSH protocol

SSH is an abbreviation for Secure Shell , a protocol used to be able to connect securely and remotely to another computer. This client allows us to protect our data by encrypting it, so that no unauthorized user can access it, becoming an improved version of Telnet.

This protocol will allow us to connect remotely to any PC, so that we can control them through commands. It will also allow us to transfer files safely , either individually or simultaneously. We can also manage RSA keys, so that we do not have to use passwords, as well as run applications in graphical mode remotely.

Therefore, SSH is one of the most widely used standard protocols for connecting computers remotely. For this and by default it always uses port 22, since this port is open in firewalls and routers. Although there is also the possibility of changing it and using another of our choice.

PuTTY is one of the oldest softwares to make remote connections in SSH in Windows and Linux, being used by network engineers all over the world. It is regarded as a terminal emulator . This will allow us to log in to another computer that is connected to the same network or through the Internet.

This program does not have a security system, but it can be combined with SSH to add authentication and encryption to protect remote connections over the Internet. In addition to SSH, it supports the Telnet and SCP protocols . This free and open source software offers a multitude of options, which have made it one of the most used remote connection programs.

Despite all this, PuTTY also has some limitations in Windows, such as the inability to observe more than one device within the same session, since it does not support starting different sessions per tab . In this way, it will be necessary to open a new window for each port or device that we are monitoring. Therefore, it is interesting to know other alternatives to PuTTY with which to make remote connections through the SSH protocol in Windows 10.

Programs that we can use instead of PuTTY

If we need a program that allows us to remotely make connections between computers connected to the network or the Internet, we are going to talk about some applications that can serve as more complete alternatives to PuTTY. Even in some cases, we will find past variants in this popular software.

If we are reliable PuTTY users and are missing some essential features, we can choose to install SuperPuTTY. It is an application for Windows. It is responsible for providing PuTTY with a graphical user interface with such important features as tab management , something that the original program lacks. In this way, it not only executes its basic commands, but also fills the gap that a window manager offers that is almost essential. 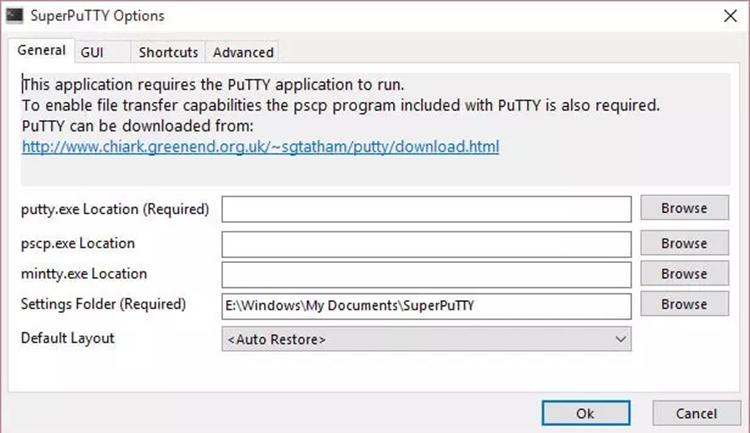 This application also offers the possibility of transferring files through SCP between the local and remote systems, allowing you to upload files safely through SFTP. It also allows us to configure its appearance in each session and store the login configuration of each of the sessions. Its compatibility with the SSH protocol, as well as Telnet, RAW and RLogin, could not be missing . In addition, it also has compatibility with another alternative such as KiTTY.

In order to use SuperPuTTY it is necessary to have PuTTY installed on our computer, and we can download it for free from this link.

It is a free and open source program through which we can manage remote connections. It works as an SSH client , but it also supports file transfer via SCP and SFTP protocols . One of its greatest features is the ability to start multiple remote sessions, which will allow us to create multiple sessions and perform various tasks by using their respective tabs. 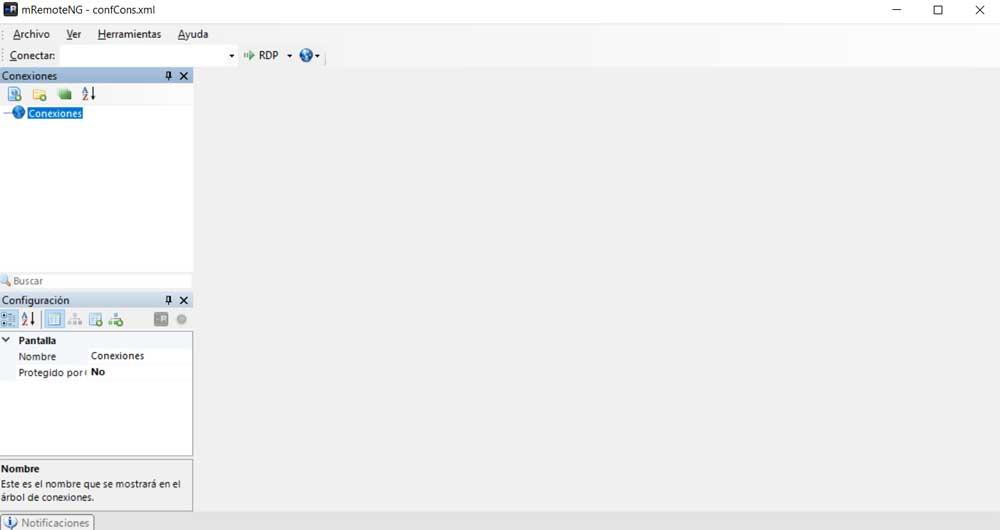 This is something that we can do in a simple and friendly way through a single interface that acts as a control center, and supports protocols such as Telnet HTTP, HTTPS, SSH, among others. It is one of the most stable softwares that we can find, since its developers always update this software to correct possible errors. Its main drawback is that it will be necessary to have advanced knowledge for its manual configuration.

This is a professional tool with which to perform SSH sessions remotely. It becomes a variant of PuTTY which also makes it a great alternative. It is an ideal application to manage several sessions simultaneously from the same console or terminal in the form of separate tabs, allowing you to customize the scripts. 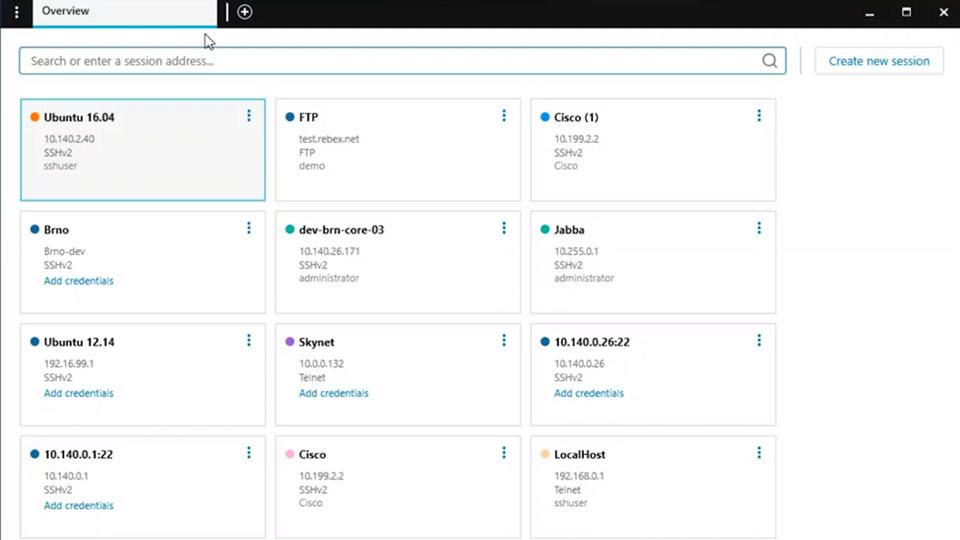 As with the original PuTTY, we can use this tool both to log in remotely on a PC and to transfer files. Among its characteristics we can indicate that it is a secure terminal emulator, with Telenet included and capable of making safe copies of SCP files . It also enables secure file transfer through integration with SFTP and the ability to perform multiple sessions simultaneously.

Solar-PuTTY is free and portable software so it does not require installation and can be used from an external storage device. It can be downloaded directly from their website.

It is a software developed for Windows with which to establish remote access with another computer. It is available as both a client and a server. With it, it is possible to make client connections using the SSH protocol , being designed to work for long periods of time. The SSH server can be configured to provide us with access to a terminal console, port forwarding, or file transfer to and from the server using SFTP, SCP, and FTPS . 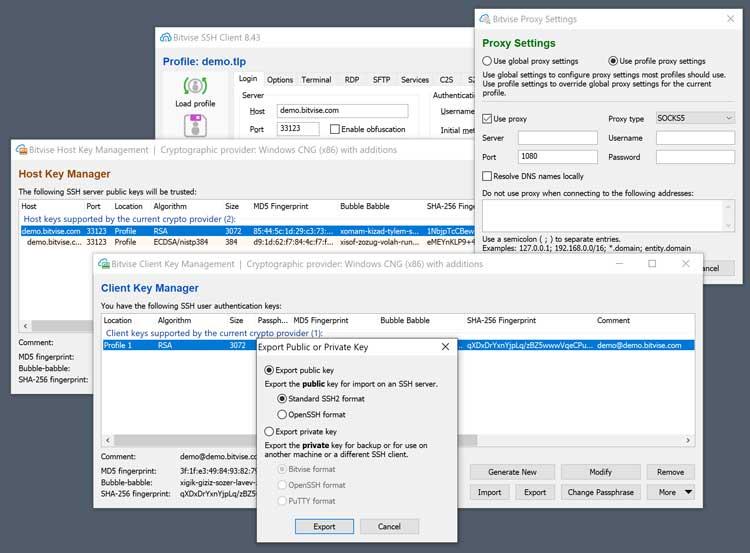 It is undoubtedly an interesting alternative to PuTTY for Windows, especially suitable for those users who require advanced functions to establish secure connections remotely as well as having simple software both when configuring and using. Furthermore, this program does not contain advertisements, does not install other third-party software, or collect user data.

We are facing one of the best computer tools for professionals such as programmers, webmasters, system administrators and, in general, for all those users who require to perform work remotely. This program can be considered as an advanced version of PuTTY. Well, not only does it support secure connections via SSH protocol , but it also supports SFTP file transfer , remote sessions, and Desktop Manager. 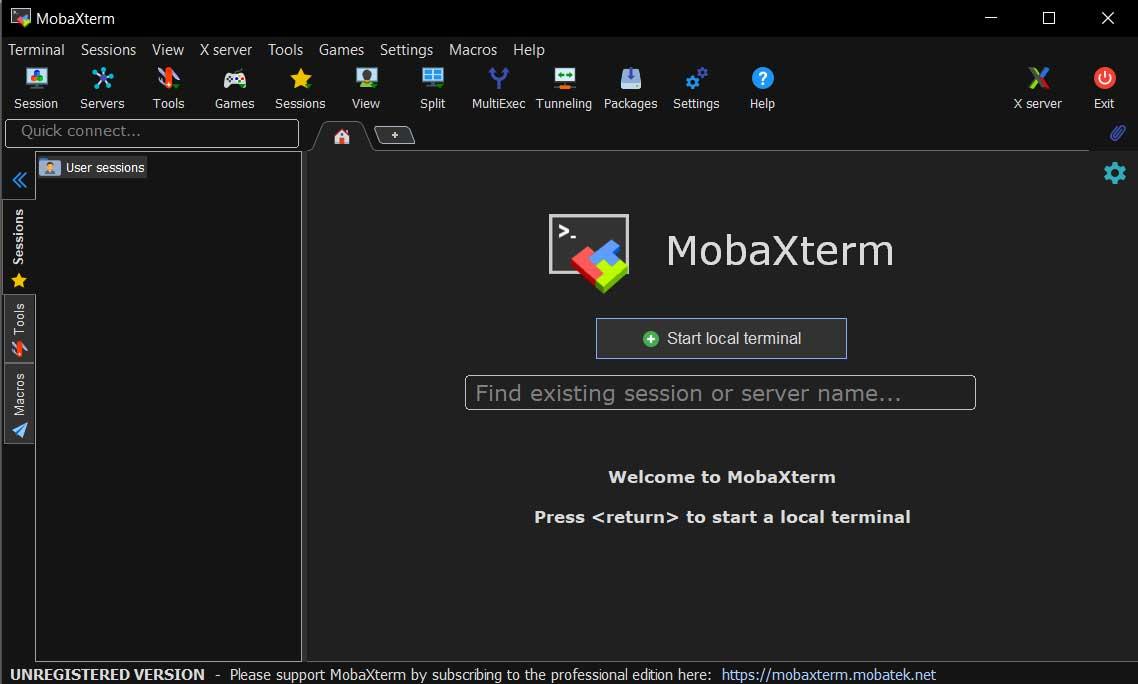 One of its most outstanding features is having a multiple execution tool, through which we can execute a single command on different computers simultaneously. The program has both a free version for home use and a paid professional version. Both are very similar, however the free version has fewer options as it lacks unlimited SSH as it only offers two. The price of the professional version is priced at $ 69 per user.

If we want to try MobaXterm as an alternative to PuTTy to make remote connections through SSH, we can download it from its official website.

It is an application that drinks entirely from PuTTY. And it uses its own source code, being modified to obtain a similar but improved tool from the original program. In this way, it can become a clear alternative, since it is free. Its interface is only compatible with Windows, although the application will allow us to log in to remote devices running Windows, Linux or macOS. 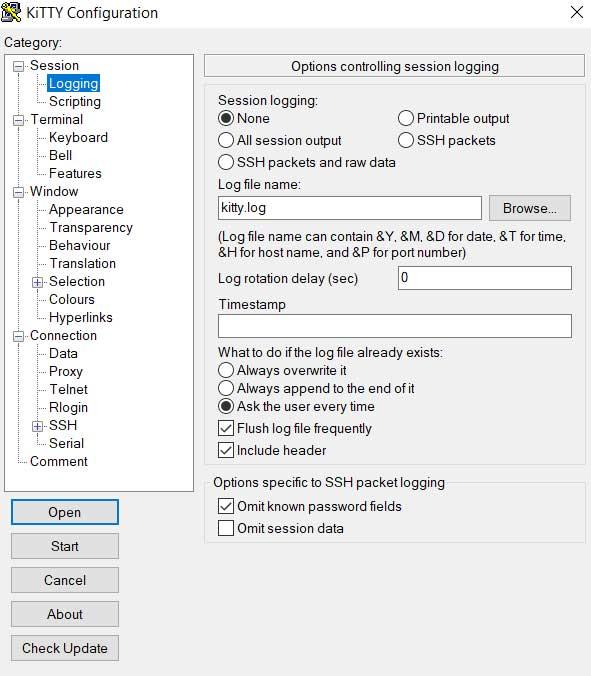 Its interface can represent multiple sessions simultaneously and includes two SCP implementations such as WinSCP and pscp.exe. Another of its characteristics is the inclusion of a chat system, a text editor, the possibility of operating through scripts and executing commands on the command line from the remote computer.

We can download KiTTY for free from this link.

This program has been developed to emulate the presence of a virtual terminal that supports Telnet, Rlogin (remote login) and SSH client . It can be very useful if we need to access the data contained in a mainframe. It can be used as an alternative to PuTTY since it has interesting features such as dynamic port forwarding and the presence of a tabular window, which allows the use of drop-down tabs to create completely separate windows. 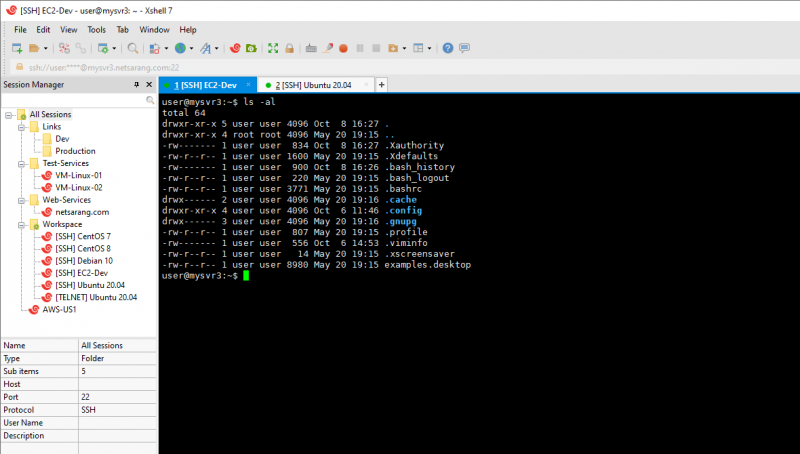 It is a very secure application that uses an MIT Kerberos authentication system . In this way we will not have to worry about sending compromised data. The application is open source and has a basic free version, suitable for most users, as well as a paid professional version.

It is another professional terminal emulator developed for Windows and macOS. Although it cannot be run on Linux, it does allow you to connect to computers that have this operating system. It is composed of a powerful scripting language that will help us automate processes such as the collection of information in remote systems. This program can be configured so that it can be used with the VT220, Wyse, xterm, QNX, TN3270 and TN5250 standards. 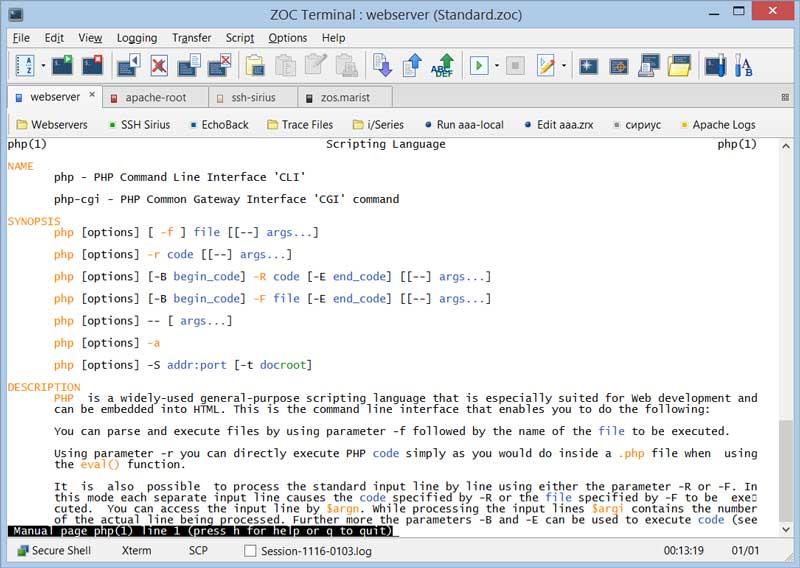 Among its main characteristics we can highlight the possibility that its interface executes several sessions simultaneously, making secure connections through the SSH protocol. It also has a wide range of standards for file transfer such as Xmodem, Ymodem, Zomodem, Kermit, FTP, SFTP, FTPS, as well as SCP. In addition, it is easy to administer and has a command language with more than 200 commands to execute.

ZOC is a payment tool, which offers us the possibility of testing the product for 30 days, before deciding on your purchase and that we can download from here. Its price is $ 79.99.

We are facing a terminal based on SSH and free that runs on Windows. It is characterized by including a secure system for the transfer of files through SCP. It has the possibility of initiating multiple connections through the tab system. Unlike other applications, the tabs are not located at the top of the panel, but are located on the left side and the lower left edge of the screen. 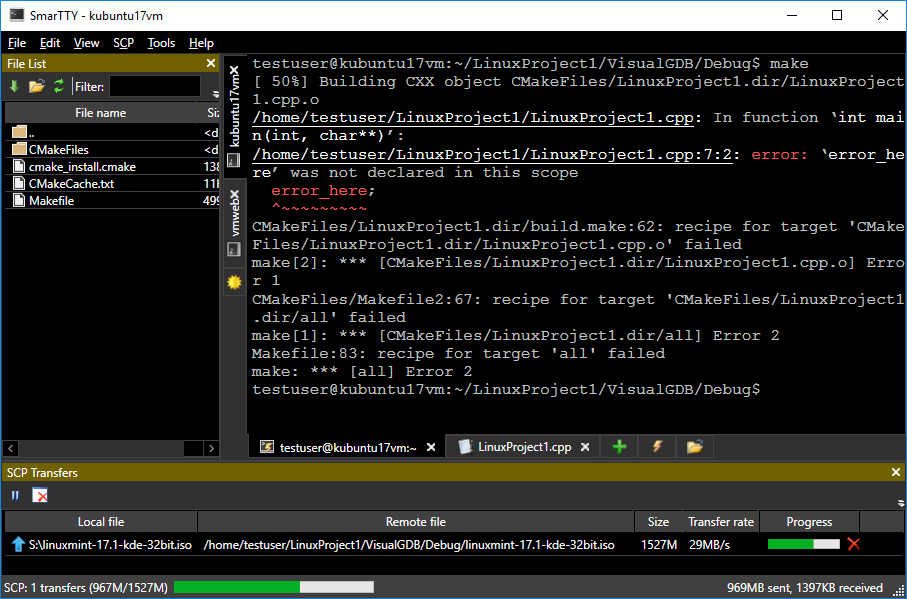 This program is also in charge of adding new functions to the transfer of files through the use of SCP, allowing to move several complete directories at the same time. It also has a built-in file editor and a hex terminal to monitor port traffic. In addition, the application has a portable version, so it will not be necessary to perform any installation on our computer.