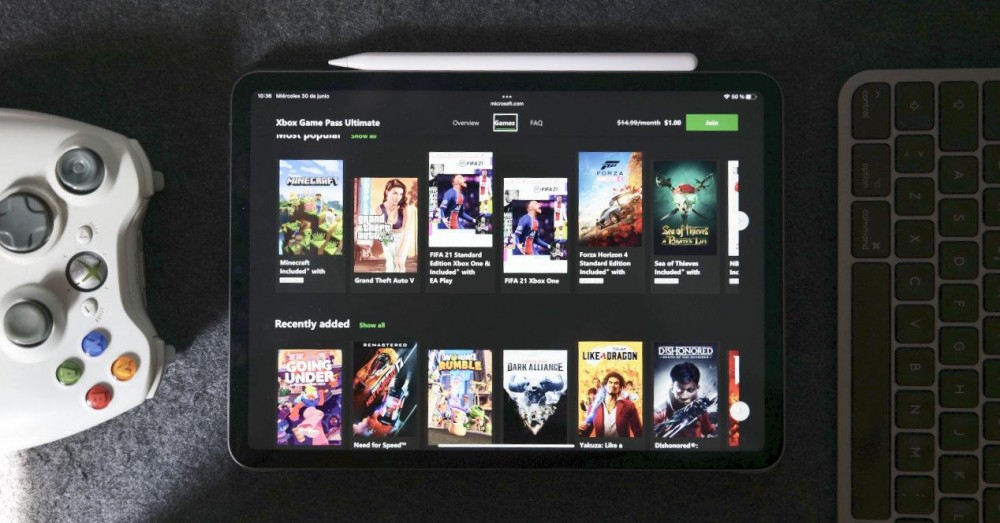 Now that xCloud has officially arrived on iOS and iPadOS, we could say that a new stage of entertainment begins for Apple users. And it is that thanks to Microsoft‘s cloud game they will be able to enjoy their own PC or console titles. For this reason, you are sure to be interested in these accessories to enjoy the best experience with xCloud for iPhone and iPad.

It took longer than we would have liked, but Microsoft’s streaming game service finally reached Apple devices officially. After seeing how to bypass the restrictions that prevented it from arriving as a native app through the App Store, now thanks to the use of Safari and a web version of the service you can enjoy a wide catalog of games directly from your iPhone or iPad, also Mac .

This opens a wide range of opportunities for Apple users with the soul of a gamer, but who for one reason or another did not have a console or a good team to do it until now. Because no matter how well Macs work, their hardware has never been ideal for gaming.

So, with more than 100 titles available, all you have to do to play Xbox Cloud Gaming from your iPhone or iPad is the following:

The games will run on Microsoft’s servers, which offer similar performance to Xbox Series X. Which means you will have faster load times along with a video signal at 1080p resolution and 60 images per second that are not bad at all. . On the contrary, they are a qualitative leap and the only thing that you will have to take into account is the connection you are using. If you enjoy good bandwidth, so will Microsoft’s cloud gaming proposal.

Improve the gaming experience with a good gamepad

And now let’s get into the matter, what really interests us in order to improve the gaming experience on both the iPhone, the iPad or even the Mac: accessories. Because depending on the device you are going to use to play regularly, some may interest you more than others. So we have made a compilation of those products that we believe can make the experience better and we start with the controls.

If you are going to play xCloud, there is no better controller than Microsoft’s own for its Xbox consoles. What’s more, many will tell you directly that there is no better remote on the market than this one. Because it is true that it is very comfortable in the grip and the asymmetric arrangement of the analog sticks has always been something that many users liked compared to other options such as Sony‘s.

Also, these controls are available in multiple designs, colors, etc., so it is very easy to find the model that best suits your own personal preferences. And that we do not have the Elite version that already considerably raises the level with several customization options to adapt to the preferences of each user.

Without a doubt, the Microsoft controls are a real vice. Because they are not only used to play, they are also collector’s items. Just a detail, if for any reason you are looking for the control of the Xbox One and One S, make sure they are the V2 version so that you can link them to your iPhone or iPad via Bluetooth without problems.

The latest versions of iOS and iPadOS also added support for DualSense, Sony’s latest controller for its recent PS5. It is a command that is also at a high level, above what its fans will tell you. And it may be, but really both this and Microsoft’s are such good controls that only the personal preferences of each end up declining the balance to one side or the other.

Of course you have a controller from the previous generation, the PS4 DualShock 4, you can also use it just by pairing it via Bluetooth to your device.

Along with the official Xbox controllers, one of the most interesting options on the market is the 8Bitdo Gamepads. Here we have already talked about them on more than one occasion and it is normal, because to that design as characteristic as this SN Pro is added the attraction of being similar to that of Super Nintendo and that it can be used on different consoles, computers or Apple devices.

If you are looking for something even more compact and that allows you to use the iPhone as if it were a Nintendo Switch, the Razer Kishi may be a good option. We analyzed the Android version, of which you can see a video below and we liked it. An interesting way to improve the gaming experience wherever you go.

Supports for iPhone and iPad

Along with a good gamepad, other very useful accessories, especially if you use your iPhone as a gaming device, are the brackets that allow you to either place them in a much more comfortable way on the table or to attach them even to the remote control to play more comfortably, even on the move. .

If you are going to use the official Xbox controller with your iPhone to enjoy xCloud, then you need this accessory that allows you to place the phone next to the controller and create a kind of laptop with which you will more comfortably enjoy the different games available.

If your intention is to just leave your mobile or tablet on the table, with a certain inclination to see it better, then a good and economical solution may be this from OMOTON. A vertical and height-adjustable table stand that will allow you to position any smartphone and the iPhone in particular as you want. You could even use it together with an iPad, although perhaps for tablets there are more suitable proposals.

This is a slightly more expensive proposal than the rest, too much if it is for a specific use. However, to be able to place the iPad at different heights, inclinations and even places is one of the most attractive that we have seen in recent months. An articulated arm that can be used both on a table with a base or fixed in other places thanks to its accessory for mounting at different points.

Of course, if you are looking for something even more versatile, this gooseneck arm will give you all the flexibility you need. So much so that you could even place the iPhone or iPad in a comfortable position to play even when you are already in bed tucked in to go to sleep later or lying on the sofa among other situations and places.

With a good sound everything is better

Although the speakers of the iPad, especially the Pro, sound great and that those of the iPhone are not bad at all, it is true that with headphones you always enjoy more and those around you are less disturbed. In addition, by having many of them you can enjoy the online options.

Some of the headphones that we recommend to use with your iPhone or iPad and the xCloud service are the following.

The latest Microsoft headsets and the official new Xbox Series X / S. They are a proposal with a high price, but if you are going to take advantage of them by using them a lot to play, they are worth it. In addition, although they are designed for consoles, it offers Bluetooth to connect them to other devices such as your iPhone or iPad.

In the same way as the previous ones, if you are going to play on your iPhone or iPad, nothing better than the AirPods Pro. Much less if you take advantage of an offer like this that we link to you.

With these true wireless headphones you will not only have a great experience of using Apple products, but also a very good sound quality and a very top noise cancellation system.

When we were able to analyze them we already told you that by design, price and sound quality it was frankly good. A very interesting proposal that has little to envy to other higher cost models. Also, this black model looks great.

In summary, in terms of headphones there are many options and you may even already have some and you will not have to buy anything. But if not, in addition to these, take a look at other reviews of true wireless headphones that we have carried out, because you will still find a model more akin to your personal needs.

However, what is really important are the other accessories that we propose to improve the gaming experience with Xbox Cloud Gaming,  a platform that will bring great joy to players of all kinds and especially to the most casual.