NASA wants to take astronauts to Mars in the 2030s on a mission that could take up to five years to complete, however, one of the biggest handicaps is the production of oxygen on the red planet so that mission crews can survive. during.

Flights into space are no longer exclusively a matter for NASA and other countries, but there are also private companies such as SpaceX, founded by the well-known Elon Musk, who want to take the top positions in the race to conquer Mars. Although SpaceX is developing spacecraft to be the first to set foot on Martian soil, against all odds we do not find that they are developing any technology, project or method to produce oxygen on Mars. Although it may occur to us that there are several projects related to the production of oxygen on Mars, the reality is that only MOXIE is focused on this task and has managed to make the United States the first country to produce oxygen. breathable on another planet. This experimental instrument the size of a toaster has managed to generate 5.37 grams of oxygen in an hour, which is equivalent to what an astronaut would need to breathe for 10 minutes. Due to energy restrictions, oxygen production is currently limited to 12gr / hr, the same amount of oxygen that can be generated by a tree on earth.

Following the landing of the Perseverance rover on Mars last February, MOXIE (Mars Oxygen In-Situ Resource Utilization Experiment) has managed to produce oxygen on the red planet in just two months. Although this technology demonstration is still in development, this fact could pave the way for what until now is a science fiction trip to become a reality.

One of MOXIE’s primary goals is to isolate and store oxygen on Mars to help power rockets that could lift spacecraft from the planet’s surface. In the future, it is also proposed that this device is capable of providing breathable air for the astronauts who make up the first mission. 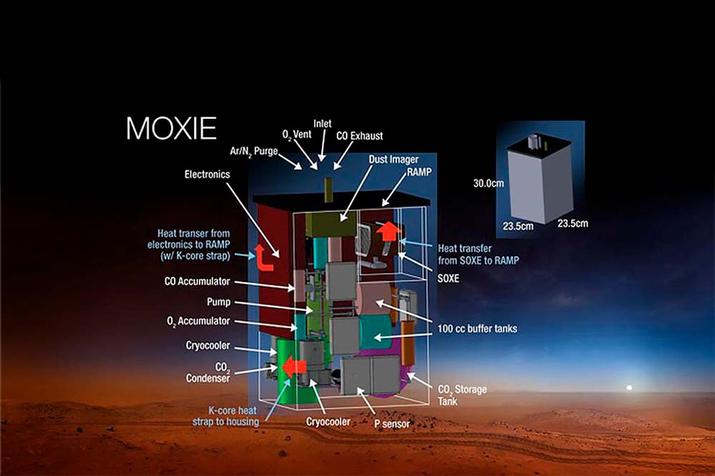 MOXIE produces oxygen in the same way that a tree does: it sucks in air from the atmosphere of Mars with a pump and uses an electrochemical process to separate the two oxygen atoms from the carbon dioxide molecule CO2. A large-scale MOXIE system on Mars could be slightly larger than the size of a stove and weigh around 1,000 kilograms. NASA has already advanced at the time that they are working on a prototype that will see the light of day in the near future.

Vijay Ramani and his team of scientists have proposed a completely different resource than MOXIE: an experimental technique that would search for oxygen in the salt water of the possible lakes that lie under the surface of Mars. Most of the water that is sensed on Mars is ice located both at the poles and in the middle latitudes of the planet. After the discovery of several lakes at the south pole of the red planet, Ramani assures that “the presence of salt water is fortuitous because it reduces the freezing point of water. Our process takes the water and divides it into hydrogen and oxygen.

However, MOXIE principal investigator Michael Hecht is not entirely clear that this method is feasible as “the authors are overlooking is that while the melting point could be -70 ° C, the freezing point at Mars is also around -70 ° C, so if these liquid brines existed, they would evaporate. ”